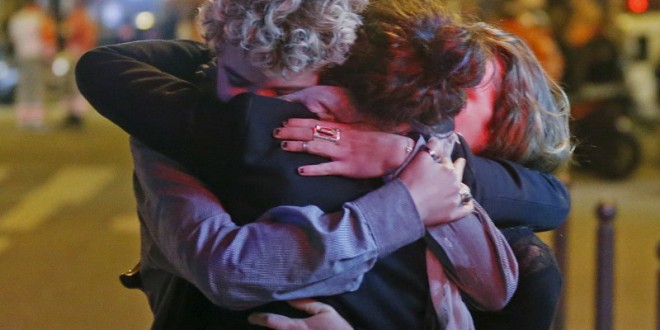 People hug on the street near the Bataclan concert hall following fatal attacks in Paris, France, November 14, 2015. Gunmen and bombers attacked busy restaurants, bars and a concert hall at locations around Paris on Friday evening, killing dozens of people in what a shaken French President described as an unprecedented terrorist attack. REUTERS/Christian Hartmann - RTS6X48

Are the Barbarians at the Gates?

I am currently reading St. Augustine’s ‘City of God’ as part of a sermon series I am teaching on learning how to dialogue and debate the issues facing Christians practicing their faith in America. His book was written three years after the barbarian Visigoths sacked Rome. It’s a fascinating and surprisingly relevant Christian apologetic for our times. It’s helpful to read a pastor who was attempting to engage the challenges of living among the riot and rubble of clashing cultures and world views. It’s with that backdrop that I have been forced to process the latest terrorist attacks in Nice, France.
“All of France is under the threat of Islamic terrorism.”
-French president, François Hollande
Such a frightening statement is backed up by a long and growing list of massacres not only in France but across the globe as radical Islamists continue to spill innocent blood through vicious and barbaric attacks on almost every continent.
Nice, France attack:
Killed 84 , around 200 people were injured, more than 52 of them critically, 10 among the dead were children and 25 remain comatose.
France, Charlie Hebdo attack:
Killed 11 people and injured 11 others
Paris, France attack:
Killed 130 people, including 89 at the Bataclan theater, where they took hostages before engaging in a stand-off with police. Another 368 people were injured, 80–99 seriously.
Orlando Attack on a gay night club:
Killed 49 people.
Baghdad attack:
The death toll from a devastating ISIS truck bomb in Baghdad has risen to 292 after dozens more of the wounded succumbed to their injuries and an additional 200 people were injured in the attack.
The political and social repercussions are fueling anxiety, resentment and fears as various countries seek to implement new laws or leaders in attempts to derail or degrade the influence and inflow of radicalized Muslims.
Russia’s new Anti-Terrorism Law:
Specially designed to respond to influx of new religious ideas and possible terrorist sympathizing groups or people.
A Military coup in Turkey (NATO member).
In a presidential election cycle, the anti- terrorism discussions are amping up to levels not seen since the internment camps of WW2.
Newt Gingrich comments:

“Let me be as blunt and direct as I can be: Western civilization is in a war. We should frankly test every person here who is of a Muslim background, and if they believe in Sharia, they should be deported,” Gingrich said in an interview with Fox News’ Sean Hannity. “Sharia is incompatible with Western civilization. Modern Muslims who have given up Sharia, glad to have them as citizens. Perfectly happy to have them next door…if you are a practicing Muslim and you believe deeply in your faith, but you’re also loyal to the United States and you believe in the Constitution, you should have your rights totally, completely protected within the Constitution,” Gingrich said. “You should have nothing to fear. Your children should have nothing to fear….This is not about targeting a particular religion or targeting people who practice in a particular way,” he added. “This is about looking at particular characteristics that we have learned painfully, time after time, involve killing people, involve attacks on our civilization.”

These comments are fueling a very divisive debate in congress, talk radio, cable news and online.
Matt Walsh, conservative blogger:
“I don’t want to hear about outreach or diplomacy anymore. Just kill the barbarians. It’s self-defense. This is a war for the fate of western civilization. It would be nice if we had some people in charge who recognize that fact.”
Those fearing increased profiling and out of control xenophobia are losing the battle of credulity when polls like the Pew poll reveal dangerous ideology in young muslims in western countries:
Do you ALWAYS support suicide bombing?
Now with the news that the new France attacker is Mohamed Lahouaiej Bouhlel, we are left waiting to hear who will claim his act of terror, was he a lone wolf or who else is connected to his drive of terror.
As I watch, read, listen, pray and process the ongoing war, I prepare to receive back my soninlaw from a deployment in Africa where he was engaged in military work related to the growing Islamist extremists presence there. We are all going to have skin in this issue in some way or another as it increases.
I spent most of my educational life being told that the Ottoman empire and the responsive Crusades were the actions of uncivilized eras of backward tribal and religious zealots. But as I watch the battle with ISIS and their dream of a Caliphate in the Middle East, I wonder about just how accurate our history books and teachers have been. I now can understand better how violence and fear can fuel the campaigns of protectionism and militarism. Even the most committed peace activists are struggling with a reasonable response to such evil. Asking people to change their Facebook image, attend prayer vigils or befriend a neighbor are sounding more and more like band-aid actions unable to stop the hemorrhaging horror going on these days.
As we struggle to wrap our minds and hearts around how someone could drive over a baby carriage in the name of religion, we must prepare ourselves for the realities of this new era of barbarism that threatens us all.