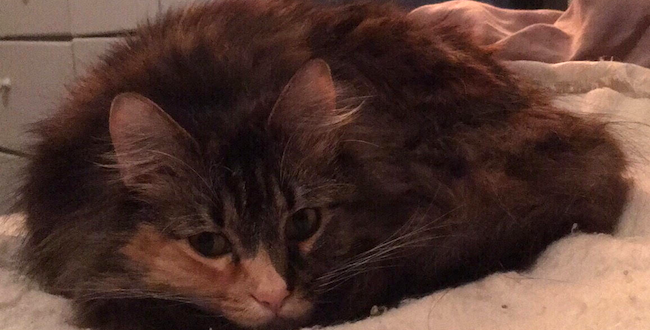 One of the Schindler cats/Neal Schindler - SpokaneFāVS

Are pets members of the family?

In 2015, I wrote an essay for FāVS titled “Do Animals Have Souls?” How we answer that question should significantly influence how we interact with and think about animals. And if their spiritual makeup is a crucial large-scale question, their status in the context of family life is an important smaller-scale question. Is a pet a member of the family, or merely part of the household?

The matter may appear purely semantic until you consider that U.S. pet owners spent almost $16 billion on veterinary care in 2016. Some Americans shell out thousands of dollars on potentially lifesaving procedures for their beloved animal companions. Others set an upper limit — say, a $1,000 lifetime cap per pet, excluding regular checkups — and elect, if expenses threaten to get out of hand, to give away or even euthanize the animal. On a less dramatic note, some pet owners leave their dogs or cats at home alone while they’re at work and feel little remorse. Others opt not to have pets until they can provide them with at least some human interaction during most workdays.

At the end of March, I posted a poll on the FāVS writers Facebook page. The question was: “How have you, personally, conceptualized your pets?” Of the 17 people who responded, 11 said they think of their pets as members of the family. Four said they consider their pets to be companions or friends but not members of the family. Two answered “Other,” and one of these respondents clarified: “Stinking, happy, bags of fur abounding with slobbering love, what I wish I could get away with.”

An unscientific survey, but telling nonetheless. Maybe FāVS writers are unusually sensitive, spiritually minded individuals, and thus especially inclined to see pets as something more than security systems (as some of my neighbors seem to regard their dogs) or lesser beings without the brainpower or emotionality to have much in common with humans. However, the better we understand how our own brains work in relation to the animals we share our lives with, the more we may realize that seeing pets as family members isn’t strange at all.

An invaluable resource on this subject is Vox reporter Alvin Chang’s article and companion video about his experience of taking care of, loving, and ultimately having to euthanize his dog. Chang is not just an animal lover; he’s also a data nerd. So his approach to the topic of pets as family members is not as sentimental as some (see: anything associated with  “Marley & Me”) and considerably more intellectually disciplined than most. At one point in the article, Chang notes:

No one ever tells you that when your dog is dying, it feels like a human is dying. At first, I tried to suppress the grief. But so many other dog owners said things like, “It felt like a family member had died.” As a data person, all I could see was a growing sample size.

Hearing other people’s stories of epic grief at the loss of a pet can help normalize those big, unwieldy emotions. Is taking time off work to mourn a dog or cat just another example of millennials’ entitlement complex, or bleeding-heart liberals’ snowflake narcissism? Or does feeling inconsolable when an animal dies simply reflect a high level of attunement to living things that don’t happen to be human? Is it healthy to be head over heels for a fur-covered creature?

Some animal lovers downplay or even hide how important animals, and most of all pets, are to them. A common accusation that animal rights activists face is that they care more about animals than about their fellow humans. In certain contexts, even for less activist types, there may be some truth to the claim. Chang’s article includes a pretty eye-opening bit of information, illustrated in a graph: 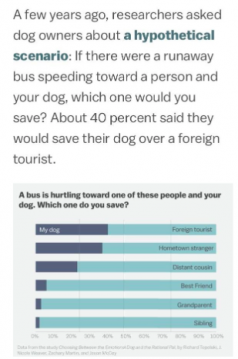 Some people see a human life, no matter who the human is, as inherently more valuable than that of an animal. Others know they’re supposed to believe that but, given a choice between saving a stranger and a pet, might go for the pet first and only then see about saving the stranger. That’s not a very socially acceptable stance, so you won’t hear it admitted much in polite company.

Yet the authors of the 2015 study “Choosing between the Emotional Dog and the Rational Pal,” which the graph above comes from, persuaded some 4 in 10 participants to say, in essence, that Fido matters more to them than Joe Random. It turns out that viewing pets as family members isn’t the exclusive domain of spoiled Brooklyn twentysomethings who dress their cats as hipsters:

In fact, it’s a global phenomenon. Last year, thanks to the Guardian, the world met Kunkush, whom the paper describes as

a beloved member of a family who became refugees when they fled Iraq for the safety of Europe. Travelling through Greece, family and cat became separated. Kunkush was found and fostered in Berlin, where an international online search was co-ordinated in the hope of reuniting him with his family, who wish to remain anonymous.

To get the full effect of this story, you really have to watch the video. When I posted it to Facebook in 2016, I commented: “The mother’s reaction reinforces my long-held belief that animals matter tremendously, can legitimately be members of a family, and can represent hope and sweetness in otherwise terribly difficult situations.”

You could speculate that Kunkush mattered so much to the refugee family because they had endured extreme adversity and had to cling to any shred of hope available. You could say the same about the Jewish children’s book “Tikvah Means Hope,” by Patricia Polacco, in which a family’s cat seems to have perished in a neighborhood-destroying fire but emerges unscathed at the end, giving the family — yep, you guessed it — an added bit of hope. According to the magazine Booklist, “Tikvah” is “based on the firestorm that ravaged [Polacco’s] hometown of Oakland, California.”

Families displaced from their homes don’t mourn the loss of a toaster. They don’t stay up nights hoping that a cherished DVD player will somehow, against the odds, find its way back to them. It’s possible that, in stories like those of Kunkush and Tikvah, traumatic events don’t artificially inflate pets’ importance within a family but simply reveal how important they already were.

My first pet grew up with me. When I was born, my family’s Shetland Sheepdog, Lad, was 2 years old. He died when I was 10. I didn’t know what to do, how to grieve, but I do remember that our house felt devastatingly empty after his death. For the rest of my childhood and adolescence, we never got another pet.

The two cats my wife and I have now are the first pets I’ve had as an adult. In both hard times and good ones, they’ve been a tremendous comfort to me, so much so that my wife calls them my “comfort creatures.” They snuggle between my feet when I’m napping, reading, or going to bed. They are ever-ready for affection or playtime.

Animals’ love, and the relationships we have with them, can appear relatively simple. Yet that simplicity detracts not a whit from the power that love and those bonds have to improve our lives. I can’t fully express my gratitude to our two funny, lovable cats for the joy and calm they provide me with each day. When our son, now 10 months old, came home from the hospital as a newborn, the big new chapter of our lives that was starting felt overwhelming to me. The cats gave me a sense of normalcy — they helped me understand that everything would be okay. That’s a debt that’s hard to repay with wet food and catnip toys.

In most of our close relationships, we don’t expect to outlive the loved one. The notable exception: certain family members. From my perspective, the brevity of our pets’ lives does not diminish their value or the realness of their membership in our family. Their time with us is so replete with sweetness that it may as well be a century.