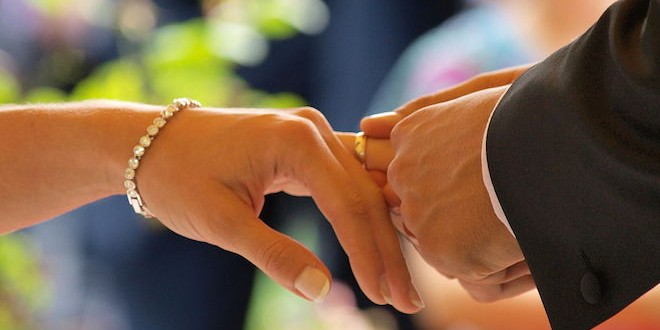 Are intermarried rabbis the next big thing in Judaism?

Sometimes, the newsiest tidbits come straight from your mother. Recently, mine let me know that the Jewish denomination we both identify with, Reconstructionism, is considering a big change related to intermarriage among prospective rabbis. According to a recent article by Adam Nathaniel Peck in “The New Republic,”

The Reconstructionist Rabbinical College, which ordains rabbis for the denomination’s more than 100 congregations across the country, took the first step late last year toward ending the policy prohibiting applications from students in interfaith relationships.

That’s a big deal. It’s one thing for liberal Jewish congregations to accept intermarried couples fully into the fold. It’s quite another for rabbis to model intermarriage, which plenty of American Jews still view as religio-cultural kryptonite. Even Reform rabbis may refuse to co-officiate an interfaith wedding with a pastor. Some might not officiate such a wedding at all.

Why so much rabbinic angst? Rabbis, like clergy of other religions, are trained not only as spiritual and community leaders but also as frontline agents in the propagation of their faith. The fear-based logic line goes like this: The Nazis and countless oppressors before them tried to wipe us out, and we survived, but we’ll do ourselves in if intermarriage doesn’t stop. My response: We’ll stagnate as a people if we don’t find a welcoming way to approach interfaith couples and families.

If rabbis are allowed to intermarry, even within a small denomination like Reconstructionism, then intermarriage gets a big, shiny seal of approval from at least one recognized branch of Judaism. It’s easy to see intermarried rabbis as a grave threat to the survival of Jewish tradition, but there’s another angle, as Peck points out:

With some congregations reporting more than half of their members as being in interfaith partnerships, having a rabbi who is also in an interfaith relationship could provide a powerful role model for couples who are unsure of how to square their own relationships with a desire to raise a Jewish family.

Even those who see intermarriage as a threat may want to consider embracing interfaith families. In many Jewish circles, that simply means embracing reality. Fear-based alternatives, such as a Judaism-wide panic or the “other”-ing of interfaith families, are unlikely to achieve positive results. In contrast, focusing on how intermarriage may actually benefit Judaism, or at least exploring the nuances of interfaith life, could help our ancient tradition move powerfully into the future.