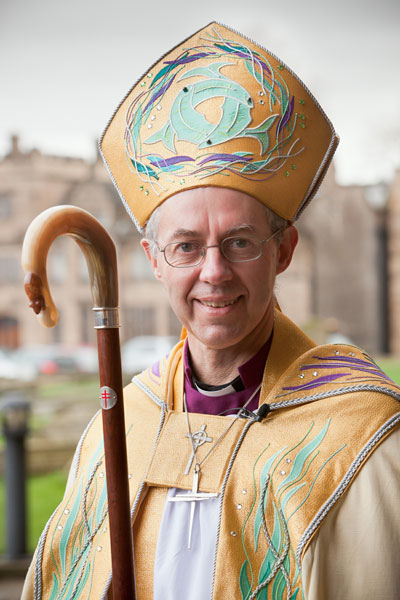 COVENTRY, England (RNS) As the new archbishop of Canterbury, Justin Welby is spiritual leader to nearly 80 million Anglicans around the world. Now, after being officially enthroned on Thursday (March 21), the 57-year-old former oil executive faces a monumental challenge: helping the Anglican Communion stay together amid profound differences over theology, gender and sexuality.

“We are struggling with very, very significant divisions, different ways of looking at the world coming out of our context, coming out of our history,” Welby said in an interview with the PBS television program “Religion & Ethics NewsWeekly.”

“Learning how we deal with those differences — which are of themselves valuable things — is really significant.

The worldwide Anglican Communion has more than 40 separate branches, including the Church of England, the Episcopal Church in the U.S. and numerous churches across Africa, Asia and South America. Theological and cultural differences over a series of issues, including homosexuality, have threatened to tear the Communion apart.

In an interview before his installation, Welby said he intends to promote reconciliation as one of his top priorities.

“It is the key theological concept for Christian faith: reconciliation with God and the breaking down of barriers between people,” he said. “And therefore for me, I have this sense that part of the church’s role is to be reconciled reconcilers.”

Welby has already created a new “Director of Reconciliation” position on his staff at Lambeth Palace, and appointed Canon David Porter from the historic Coventry Cathedral to the post.

But it will be no easy task. For the past decade, the Anglican Communion has been in turmoil after the Episcopal Church consecrated two openly gay bishops and moved to approve blessings for same-sex unions. Several African and Asian jurisdictions accused the U.S. church of heresy.

Some conservative American congregations have broken away from the Episcopal Church and aligned themselves with Anglicans from other parts of the world. There have been a series of contentious lawsuits over church property, and bitterness still prevails in many quarters throughout the Anglican Communion.

In such circumstances, Welby conceded, it’s difficult to even think about reconciliation.

“Reconciliation is extraordinarily painful for those involved in the conflict,” he admitted. He said his view of reconciliation is not a “fuzzy wuzzy tolerance, sort of fluffy, where it would all be nice if we were nice to each other sort of rubbish.”

Rather, he said, it involves hard work, courage, and honesty.

“It is the process … of making yourself sufficiently transparent that people trust each other, of putting your most valued and passionate beliefs out for them to be examined, attacked, and then finding a way to love the person with whom you are dealing, quite probably not agreeing with each other, but disagreeing in love,” he said.

On two of the most controversial issues, Welby opposes gay marriage and supports allowing women to be bishops. He acknowledged many of the current divisions in the Anglican Communion stem from differing views of how to interpret Scripture.

“We need a certain integrity about where we get our truth from. Now I’m not saying that truth is up for grabs. There are truths. I believe passionately in that,” he said, adding however, that in pursuing truth, Christians must be still be concerned with how they treat one another.

He called for “not only theological orthodoxy, but relational orthodoxy, in other words, right relationships as well as right understandings and ideas.”

Many question whether such a vision of reconciliation is still possible in the Anglican Communion, but Welby is optimistic about the future — mostly, he said, because he believes in the grace of God.

“When God is left out of it, then all we’re left with is our own ideas, and we defend those to the death and preferably the death of the other,” he said. “When God is in the middle of it, there is a transforming power and presence.”