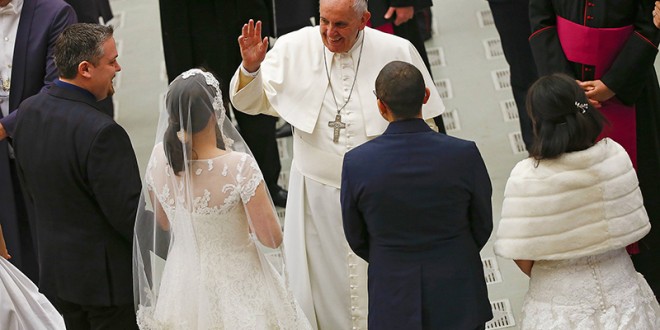 (RNS1-jan21) Pope Francis waves to newlywed couples during his Wednesday general audience in Paul VI hall at the Vatican on Wednesday (January 21, 2015). For use ONLY with RNS-POPE-FAMILIES, transmitted on January 21, 2015, Photo courtesy of REUTERS/Tony Gentile

(RNS) Pope Francis’ “The Joy of Love,” a massive document released Friday (April 8) that wraps unchanged doctrine on marriage, divorce, and LGBT life in gentle terms, is getting a mixed reaction from U.S. Catholics and others.

It brought joy to conservative Christians who feared Francis would tamper with dogma, but less love from liberals who had hoped for a change in practices, not simply in tone. Statements flooded out from both directions. A sampling:

Analysis by Catholic publications also divided on which themes to highlight.

National Catholic Reporter columnist Michael Sean Winters pulled a more optimistic message from the document. He says Francis “challenges the Church to do more than simply repeat the Catechism and harangue the fallen. … (T)he Holy Father does not believe the pastor, still less the magisterium, should tell people what to do, but that a pastor should accompany people so that they can discern God’s activity and calling in their own lives.”

The National Catholic Register highlighted a different thread through the document, one that might disturb conservatives by muddying up traditionalist ideas of clear rules with unspecified pastoral discretion: “Francis speaks in the chapter of a ‘need to avoid judgments’ that don’t take account of the ‘complexity of various situations’ and stresses the need of ‘reaching out to everyone.’ The divorced, he writes, should not be pigeonholed in ‘overly rigid classifications,’ leaving no room for personal and pastoral discernment.”

Reaction did not only come from Catholics struggling with the complex material and conflicting ways to read it. Russell Moore, president of the Southern Baptists’ Ethics and Religious Liberty Commission, tweeted @drmoore:   “Man. #AmorisLaetitia is a mess.”

Previous Tired, but still standing in ministry
Next Why women are more religious than men