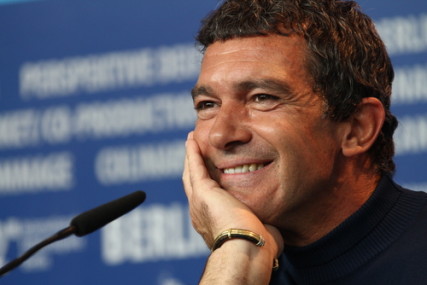 Antonio Banderas may be cast as Pope Francis in biopic

Antonio Banderas attends a news conference during the 62nd Berlin Film Festival on Feb. 15, 2012, in Berlin, Germany. Photo courtesy of cinemafestival via Shutterstock

ROME (RNS) Spanish heartthrob Antonio Banderas may be cast in the role of Pope Francis in the first feature film to be made on the life of the Argentine pontiff.

Italian director Daniele Luchetti plans to make the $12 million Spanish language film, titled “Call Me Francesco,” with producer Pietro Valsecchi, who has made some of Italy’s highest-grossing movies.

Valsecchi’s Rome-based production house, Taodue Film, confirmed the news Wednesday (May 14), and a spokeswoman said the company was looking to shoot the film in various locations, including Argentina and Italy.

Banderas is one of the top Spanish-speaking actors being considered to play the lead role, she told Religion News Service.

The film is based on the best-selling book “Francisco: El Papa de la gente” (or “Francis: The people’s pope”) by Evangelina Himitian, a journalist with the Buenos Aires newspaper La Nacion.

Casting is still being finalized but pre-production is well underway, the company spokeswoman said.

Shooting is expected to begin this summer. Taodue declined to speculate on whether the film would be completed and ready for release on Dec. 17, the pope’s 78th birthday.

Last week, 53-year-old Banderas, a native Spanish speaker like the pope, said in an interview he was proud of what Hispanic actors had achieved in Hollywood. When he arrived in the U.S., he said, he was told he should expect to play a “villain all my life” because “blacks and Hispanics” were usually cast as the bad guys.

While Francis has generated worldwide interest and a slew of documentaries since his election, so far no feature films have been produced about his life.

The post Antonio Banderas may be cast as Pope Francis in biopic appeared first on Religion News Service.