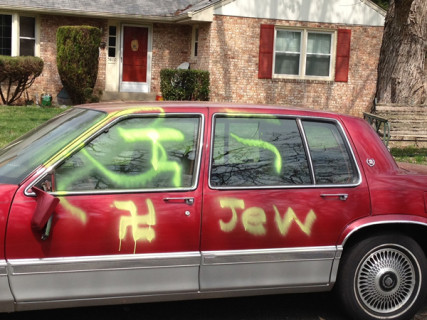 Anti-Semitic incidents continue to decline in US

(RNS) Continuing a decade-long drop, anti-Semitic incidents in the U.S. declined by 19 percent, according to the Anti-Defamation League’s most recent annual audit.

A neighbor reported that a car belonging to an owner two homes down was spray-painted with swastikas and “Jew” in bright yellow paint in Alexandria, Va., in March 2012. Photo courtesy of Anti-Defamation League

“The falling number of incidents targeting Jews is another indication of just how far we have come in finding full acceptance in society, and it is a reflection of how much progress our country has made shunning bigotry and hatred,” said Abraham Foxman, national director of the ADL.

In 2013, the ADL counted 751 anti-Semitic incidents, a decline from the 927 incidents in 2012. Compiled since 1979, the ADL annual report includes assaults, vandalism and harassment targeting Jews. Anti-Israel incidents are only counted when they cross the line into anti-Semitism.

Overall, anti-Semitic incidents related to anti-Israel activity fell markedly in the past year, a change the audit’s authors attributed to fewer anti-Israel demonstrations. That, in turn, may be because Israel was involved in fewer major military actions in 2013.

The ADL noted one “dark spot” in its survey: a significant increase in anti-Semitic assaults — 31 incidents, up from 17 in 2012. The audit offers the example of a 12-year-old Jewish girl in Brooklyn who had a bottle thrown at her by a group of girls, including one who called her a “dirty Jew.”

“The high number of violent in-your-face assaults is a sobering reminder that, despite the overall decline in anti-Semitic incidents, there is still a subset of Americans who are deeply infected with anti-Semitism and who feel emboldened enough to act out their bigotry,” said Foxman.

Incidents of anti-Semitic vandalism in 2013 dropped to 315 from 440 in 2012. They included an incident in which someone scrawled a swastika and “Death to Jews” in a service hallway of a Long Island mall, and another in which the word “Jew” in foot-high letters was cut into the trunk of a car with a Jewish day school bumper sticker in Natick, Mass.

The post Anti-Semitic incidents continue to decline in US appeared first on Religion News Service.

View All Posts
Previous Will you choose burial, cremation or another method?
Next Ask A Mormon: How do you respond when people argue that Mormonism is a cult?