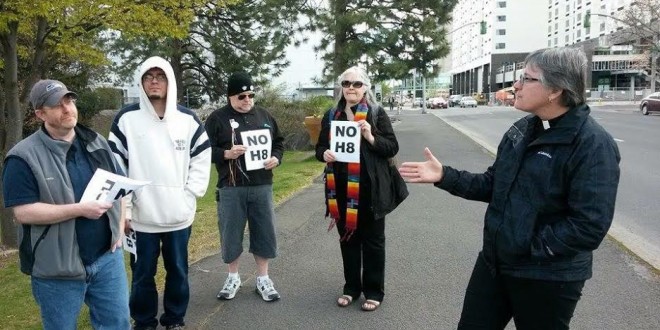 Bryce Peterson saw the recent passing of these laws as an opportunity to organize and lead a rally that he hoped would lead to increased exposure to the issues many Americans see with these states passing the RFRA, he said.

This act was originally passed in 1993, in response to the Supreme Court’s decision in “Employment Division of Oregon v. Smith in which the Court held that the state of Oregon was free to include religiously inspired peyote use within the reach of its general criminal prohibition on use of that drug, and thus permitted the State to deny unemployment benefits to persons dismissed from their jobs because of such religiously inspired use,” according to Civilrights.org.

LGBT groups are claiming that under this law, businesses are allowed to discriminate against them. For example, a lesbian approaching a business for a wedding cake could be told by the owner that a cake will not be made for her because her religion does not acknowledge marriage outside of a man and a woman.

“[This law] is a thinly veiled attempt to continue this long movement of aggression against LGBT people in America; it’s just the latest of many,” said Peterson.

He thinks the law should be modified “to provide complete and unquestionable protections given it’s acceptable to everyone,” or repealed.

Peterson is a concerned citizen with a long background in religion.

“I worked at Moody Bible Institute. I also worked in Spokane here as well with Victory Faith Fellowship, a local evangelical Church,” he said.

At one point in time Peterson was on the other side of the argument, but switched views after people close to him came out.

“I was exposed to LGBT people and that started the whole thing crumbling down,” he said.

Peterson sees this issue as “unquestionably, the civil rights issue of our time here in America. There are other major issues we are facing, but when we are talking about the oppression of an entire category of citizens, that is massive, everybody should hear about that.”

“I see a problem with that [law] in that you could limit the civil rights of individuals. Back in the day before the Civil Rights passed in America you could say that about Blacks, you could say it’s against our religion to serve Blacks; our country stood up and said ‘no, that’s not right, that’s not okay’ and it’s like we are going backwards in time,” Shannon said.

She said the best thing that people can do to increase awareness and acceptance is to speak out against the Act.

“I think in whatever venue they have, at work or at school, wherever they live their lives of outside of the church building, on Facebook or Twitter or whatever is to speak up against it in some rational way but to just do what Bryce Peterson said to do earlier, just to allay fears and say you know nobody is trying to take away anything from you, we just want a more inclusive society. You know, gay people aren’t scary. We really don’t have an agenda, we don’t have meetings,” she said.

A main point the speakers wanted to get across was that a few Christians don’t speak for all Christians.

“For one group, such as these groups in Arkansas and Indiana, for them to say there’s some orthodoxy, that there’s one true faith, is incorrect, and aside from being hateful and wrong, it’s just not true.  They certainly don’t own it, whatever ‘it’ is. There’s just not a thing,” Shannon said.

Previous YWCA to present Stand Against Racism event
Next Blossoms, a poem