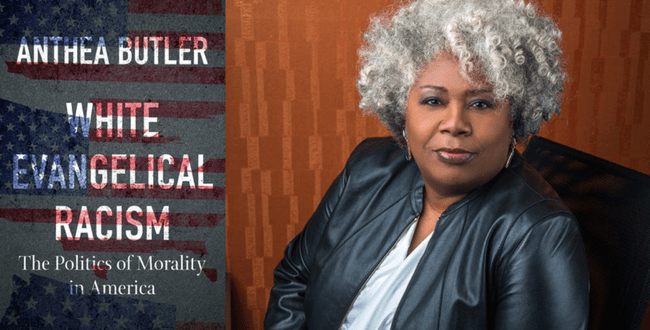 White evangelicals, “you have a problem,” writes Anthea Butler in her latest book. “That problem, is racism.”

In “White Evangelical Racism: The Politics of Morality in America,” Butler packs a historical punch in this short, but mighty, 150-page book with erudite and efficient language. In it, she carefully, and for the most part, fairly, exposes the racist root of what is mostly known as American Christianity today.

The book is made up of an introduction and four chapters that map out that history in its most notable details — from America’s notorious slavery to the 81% of white evangelicals voting for Trump in the 2016 election and on into the present.

Butler is an associate professor of religion, a historian and a public commentator on religion and politics, and she uses her knowledge and her own personal experiences as an evangelical, a label she left while in graduate school more than 20 years ago, to craft solid arguments about the ground of racist history from which white evangelicalism grew.

She uses Chapter 1 to show “The Racist Foundations of Evangelicalism in the Nineteenth Century” in large part illustrating how biblical texts were used to justify slavery, how denominations split because of those biblical interpretations of slavery and the rise of the “Religion of the Lost Cause,” which she writes combined Christianity and southern slaveholding values believing them to be the “key to Christian civilization.”

One of the biggest “aha” moments for me in this chapter came from learning the history of the Ku Klux Klan, especially in its second iteration when on Nov. 25, 1915, 17 men lit a cross, “pledging allegiance to the Constitution, American ideals, and the tenets of the Christian religion” (emphasis hers).

This proved to me that the echoes of the past are in the speeches of the present, and that the author of one of the Bible’s wisdom books is right, “There is nothing new under the sun” (Ecclesiastes 1:9).

Butler continues on in the next three chapters showing how the thread of racism traveled in evangelicalism’s development.

Chapter 2, “Saving the Nation,” shows how atheistic communism became the big boogeyman that cozied evangelicals up with the Republican Party. Billy Graham and his tepid response to the Civil Rights Movement is a large feature of this chapter, showing how Graham and his contemporaries accused Civil Rights leaders and their protests and marches as coming from communism, thereby diminishing their efforts for a more perfect union.

The third chapter, “Whitewashing Racism and the Rise of the Religious Right,” tells the story of Jerry Falwell and his leadership and rise of the Moral Majority, which began in 1979. This movement more openly aligned evangelicals with the Republican Party, using in large part the same methods he and Graham and their contemporaries criticized the civil rights leaders of doing years before.

This chapter carries the history I am most familiar with, as I have come to learn over the years in my faith journey that my politics need to be in submission to my faith, not the other way around. You see, I was taught, and many others like me, that to be a good Christian, one can only vote Republican — a belief that still has a stronghold in much of white evangelicalism today.

The most salient point in this chapter, however, is when she writes of the one issue that united white evangelicals to the right more than any other: state’s rights, especially the right of each state to determine whether or not their tax-deductible private schools can still remain segregated.

She references Randall Balmer’s 2014 Politico article, “The Real Origins of the Religious Right,” another excellent primer that tells the sordid history of the Moral Majority, disputing the talking point that it was the fight against abortion that united Christians to Republicanism.

Chapter 4, “How Firm a Foundation,” shows just how firm the foundation of racism is in white evangelicalism in modern times and how that continues to express itself in politics. She covers a lot of history in this chapter. Butler writes about George W. Bush’s race against John McCain in the 2000 Republican presidential primaries and how the race card was used against McCain when pundits began saying that his adopted daughter from Bangladesh was actually a Black child born to him out of wedlock.

She exposes the rise of Islamophobia in reaction to the events on 9/11 and how that led into the “birtherism” conspiracy theories against Barak Hussein Obama, America’s first Black president.

Another stand out aspect of this book for me is found in Chapter 4, when she talks about Glenn Beck partnering with Sarah Palin for Beck’s 2010 “Taking Our Country Back” tour. Butler writes they “promoted a pseudoreligion of guns, God, and flag that closely resembled dominionism, a type of fascist, neo-Christian framework that made the Bible not merely a Christian document but the very constitution of America.”

Does that, too, not sound familiar today in light of the Michael Flynn and Clay Clark “ReAwaken America” Tours peppering our nation, including one that was recently held in Post Falls? This also reminded me of Turning Point USA Faith’s “Free America” tours, and others like it, hosted by TPUSA founder, Charlie Kirk (one of which was hosted by a local church, I reported on here for SpokaneFāVs).

I’ll end my review with what she ended the book with: her conclusion. This is where her personal opinions take center stage and she gets more direct with white evangelicals, including myself. This is where she uses her viewpoint to show what this racism continues to do to her, to America and to the soul of evangelicalism.

I was affected and schooled, by the entire book, but especially that conclusion — hopefully to my own betterment. Her case is comprehensive, and she’s absolutely correct that racism runs deep in our veins.

Every white evangelical needs to read this book, even if they quibble with her historic summations and conclusions. Maybe especially if they do. Hers is a lens we all desperately need to see through and consider.

She will challenge the narrative we have in our heads about our own religious and political histories and may make us question, do we really want to “Make American Great Again” for just white evangelicals?

I don’t, and maybe this book will help others see they don’t either.