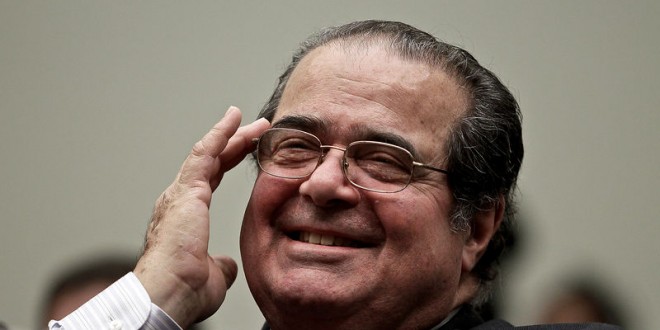 Justice Scalia’s dissent in the court’s 2013 gay marriage rulings set the stage for the overturning of bans on same-sex marriage in dozens of states.

Another of Justice Scalia’s Legacies

With all the kerfuffle over whether President Obama should exercise his constitutional obligation to nominate a replacement for the late Justice Antonin Scalia (does anyone think Jay Sekulow or Tony Perkins would be recommending delay if it were a President Romney at 1640 Pennsylvania Avenue?), and the legacy of Scalia’s puckish Originalist interpretation of that Constitution, I can’t help smiling wryly to recall one of Scalia’s famed dissents that came on my scope because it relates to the Edwards v. Aguillard creationism case of the 1980s, which I delved into at some length in my #TIP “Troubles in Paradise: The Methodology of Creationism” project.

It said a lot about how Scalia applied his reasoning to an area of controversy about which he knew little, and showed no inclination to correct his misunderstanding.

For those unfamiliar with the case, in the 1980s a group of Young Earth Creationists and their political allies tried to slip their dogma (a recent one at that, originating from Ellen White’s Adventism in the 1920s) into several state science curricula, via an Equal Time rule whereby Creation Science would be included if evolution was to be taught. The Louisiana case made it all the way to the Supreme Court, and while the majority of the justices rejected this effort as a patent attempt to slip a religious doctrine into secular science classes, Scalia submitted a ringing defense of the indefensible: namely that Creation Science wasn’t too far off the beaten track to be included in regular science instruction, and that the Louisiana legislators backing it had only to believe (or profess to believe) that it was science for that to wear the cloak of a purely secular purpose.

That the carefully worded statute was deliberately crafted to be evasive about its Kulturkampf religious roots was a possibility that Scalia did not for a moment ponder.

The meat of Scalia’s argument turned on accepting the relevance of the two pro-Creation Science presentations made to the Louisiana legislature. Their heaviest gun was biologist Dean Kenyon, who had come to be a convert to Creation Science during this period and had coauthored the notoriously evasive Of Pandas and People antievolution textbook that would figure more recently in the 2005 Dover Kitzmiller “Intelligent Design” case, also covered in #TIP .

Creationists Edward Boudreaux (a minor player on the creationist scene then and now) and John Morris (son of the founder of modern creationism, Henry Morris) were among those relied on selectively by the bill’s sponsor, Bill Keith, but at no point did Scalia show any curiosity about their expertise or knowledge, effectively accepting their claims (much as the Louisiana legislature had), an amazing deck-stacking episode where one side is allowed to characterize both sides of an issue.

We get the same thing today with climate change skeptics paraded before friendly committees in Congress, such as by Senator Ted Cruz.  Sorry folks, methodology matters, and bad methods have a tendency to bite.

In the creationism case, Scalia was perfectly happy with a provision of the Louisiana law that would have created a committee staffed by seven creationists to advise on the science curriculum. The same dynamic surfaces today in the Intelligent Design “Teach the Controversy” campaign, where pro-design advocates seek free reign to present their version of a selected data set, protected by bills forbidding their being called to account for their content or methods.

Such are the practical legacies of a legal tradition where ideology was elevated on a pedestal, unaccompanied by a sound method.

By all accounts Scalia had a great wit and sense of humor, getting along quite well with his ideological opponents on the court, but on this methods matter I’m not laughing—and neither should anyone else.

Previous Pope versus Trump: Catholics in the US are politically homeless
Next Poet and “Genocide” Survivor, Alicia Partnoy Speaking at Gonzaga

In this video I talk with Kacy Kracke a student teacher during the 2020 pandemic.