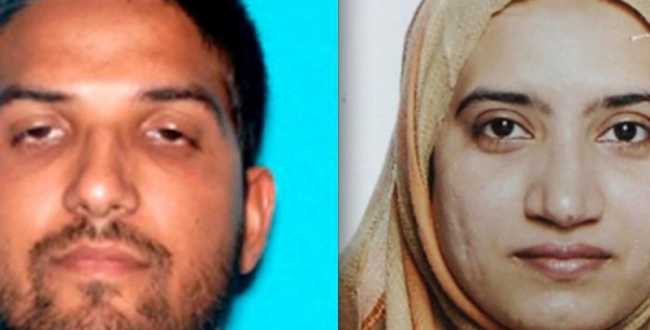 Syed Rizwan Farook and Tashfeen Malik have been identified as the San Bernardino shooters.

Americans were once again shocked when a married couple opened fire in San Bernardino last week, killing 14 and injuring 21 people. Even though their motives are still unclear, one thing that is clear and that continues to be reported is that they were Muslims. Many people have commented on politicians that offer thoughts and prayers to the victims, but do not work on legislation that can curb or prevent gun violence. Although it is a legitimate criticism, most Americans are overlooking another important issue. We are overlooking the hypocrisy of how we treat mass murderers that are Muslims versus mass murderers that are not Muslims.

The mass shooting in San Bernardino was the 355th mass shooting of 2015, yet the religious affiliations of the shooters involved in nearly all of the other shootings is not the focus of the conversation. White supremacists burn Black churches and kill their congregants, but we do not talk about their religious motivations for these crimes. A Planned Parenthood clinic was attacked by a Christian man, but his religious motivation is not talked about in the way that a Muslim shooter’s religious motivation is talked about. These, and many more, are cases of domestic terrorism, but we do not even label them accordingly. Rather, we label these acts as hate crimes or acts of violence by deranged individuals, never questioning if their religious affiliations had any underlying influences like we do when the shooters are Muslims.

More importantly, failing to understand and discuss this hypocrisy directly leads to anti-Muslim bigotry and Islamophobia. By focusing on the Muslim identity of the San Bernardino shooters and immediately suggesting it is a terrorist act and inspired by global “jihadism,” Muslim Americans become the targets of bigoted backlash. For example, the mosque in Pullman received social media threats. Talking with Muslims in my community, they simply do not feel safe going to mosque in fear of a violent attack. The Friday after the San Bernardino shooting, the local Spokane mosque’s Friday sermon attendance was about a quarter less than normal as a direct result of local Muslims being afraid to attend services.

There should be a sense of responsibility by our elected officials, religious leaders, and everyday Americans to educate the masses that Islamophobia is real and the victims of unchallenged anti-Muslim bigotry are your everyday Muslim American neighbors. For some strange reason, many people in positions of power make a distinction between what it means to be American and what it means to be Muslim, as if the two cannot coexist. A common argument to the San Bernardino shooting is something along the lines of, “Americans will react when Muslims spill American blood.” Let us not forget that the shooters were Americans, and arguments like that tell everyday Muslim Americans that their contributions and efforts to making this country better are somehow not legitimate because they are Muslims, not Americans. American Muslims contribute to this country in many remarkable ways and in many professional fields, from the military to medicine, from teaching to technology. It is absolutely unacceptable to state that Muslims are not Americans, or to make a clear distinction between the two.