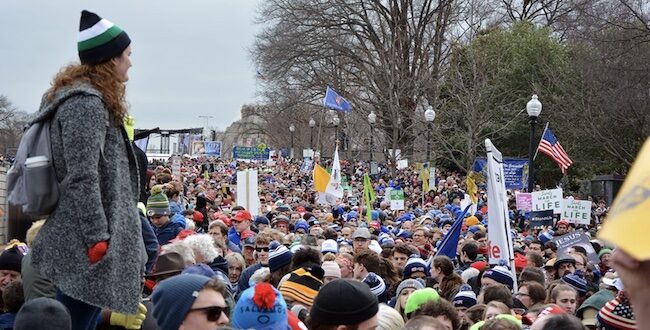 Attendees participate in the annual March for Life rally on the National Mall, Friday, Jan. 24, 2020, in Washington. RNS photo by Jack Jenkins

The March for Life is going virtual this year.

The move online comes as the COVID-19 pandemic “may be peaking” and amid the “heightened pressures that law enforcement officers and others are currently facing in and around the Capitol,” according to a statement posted Friday (Jan. 15) on the March for Life website — two weeks before the event was set to take place on the National Mall in Washington, D.C.

“The protection of all of those who participate in the annual March, as well as the many law enforcement personnel and others who work tirelessly each year to ensure a safe and peaceful event, is a top priority of the March for Life,” the statement read.

The annual anti-abortion demonstration has brought demonstrators to the nation’s capital each year since the first anniversary of Roe v. Wade in 1974 to hear from speakers and march to the Supreme Court building, calling for an end to abortion in the United States.

Delegations from Catholic and evangelical schools often travel to the march from across the country.

Instead, this year, a “small group of pro-life leaders from across the country” have been invited to march on Jan. 29 on behalf of those supporters, who are encouraged to RSVP on the March for Life website for details on how to watch a livestream of the event.

Previous speakers include President Donald Trump, who became the first president to speak at the March for Life last year, and Vice President Mike Pence, who addressed the event in 2017.

The announcement that the march would be virtual came not long after the National Park Service announced it is closing the National Mall through Inauguration Day (Jan. 20) because of security concerns following a riot by Trump supporters at the U.S. Capitol earlier this month.

“We are profoundly grateful for the countless women, men, and families who sacrifice to come out in such great numbers each year as a witness for life – and we look forward to being together in person next year,” the statement from March for Life read.

Previous Letter to the Editor: Standing United Against Violence
Next Ask A Catholic: Who Do You Think The Next Pope Will Be?