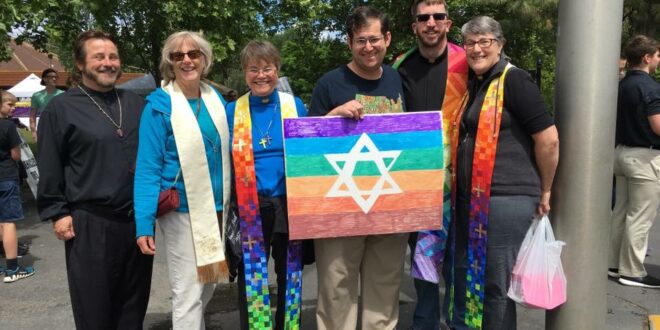 The annual Interfaith Pride Worship Service will be held in-person this year, where those of several faiths and denominations will meet and tell members of the LGBTQ community they are loved and welcome.

Created in 2016, Jan Shannon, organizer of the event, said the service was made to re-invite people of faith back after having been kicked out of their religious organization.

“Too many LGBTQ people were kicked out of religious organizations, or made to feel unwelcome and unclean, so I created this worship service as a way of extending a welcoming hand to those who were pushed out of church,” Shannon said.

Aside from being pushed out of Christian Churches, Shannon said LGBTQ have been pushed out of un-affirming Jewish synagogues and Buddhism, too.

“From the beginning, the organizers wanted to be as inclusive of all faith traditions possible,” said Ven. Thubten Chonyi of Sravasti Abbey.

Chonyi said they initially met with the wish that the next generation of LGBTQ people could feel safe and see faith leaders united in their support.

Chonyi described how the service provides spiritual fulfillment and healing to those longing for it.

“Spirituality seems to be an intrinsic aspect of being human,” Chonyi said. “Very loosely defined, it’s a sense of connection with or to something larger than ourselves, and we see countless expressions of spirituality throughout human history in the variety of religions and philosophies.”

While many people fulfill their spiritual needs through art, nature or music, Chonyi said some people find it in the halls of organized religion.

However, Chonyi described how for centuries that form of spiritual fulfillment has been denied for those who are openly LGBTQ.

“Where they have been despised in the general society, they have also been shunned in places of worship, in the halls of organized religion,” Chonyi said. “Because this spiritual longing is so deep in all of us, spiritual rejection can leave deep wounds. For me, that’s what this Pride Interfaith Service seeks to begin to heal.”

Shannon said the service recognizes that people of all faiths need to be reminded that being LGBTQ is perfectly natural, and that there are now more welcoming faith organizations than there were years ago.

It is during this service that clergy of different faiths and denominations, Chonyi said, stand up and say they recognize their goodness, the depth of their kind hearts and celebrate the expression of their faith. For people of theistic religions, she added, this also means acknowledging that the LGBTQ are created in the image of God just like everybody else.

All of the clergy, and some of whom are LGBTQ, are fully affirming of all sexualities and sexual identities and all speak words of life and wholeness to this community, Shannon said.

“These affirming clergy desperately want the LGBTQ community to know, to really hear their hearts, that they are loved by God, by the Spirit, by whatever Higher Authority there might be,” Shannon said.

Over the years, the service has been a gentle way to re-enter a faith-based experience without having to set foot in a church, Shannon said. Also, when Christian clergy offer communion after the close of the service there are often tears of joy and disbelief by those who haven’t been offered it since coming out because they are receiving communion “while standing in their truth as a gay person, or trans person, or bisexual person.”

Shannon said this reaction is what keeps the clergy coming back every year to offer it again.

“From the Buddhists perspective, all living beings possess what’s called ‘buddha nature,’ a basic purity of heart/mind with the capacity to develop infinite love, compassion and wisdom,” Chonyi said.

Aside from communion, Chonyi and Shannon said the service will include music, singing, some sharing from a variety of affirming clergy and some interactive parts for attendees.

“The service will reflect the people that show up, so we hope lots of people will show up and help us create a beautiful experience,” Shannon said.

The service will be held on Wednesday, June 8, at 6 p.m. at St. John’s Cathedral.

Previous The Body Of Christ Is Betrayed: Reflections On Sexual Abuse In The SBC
Next Who Will Light the First Candle?