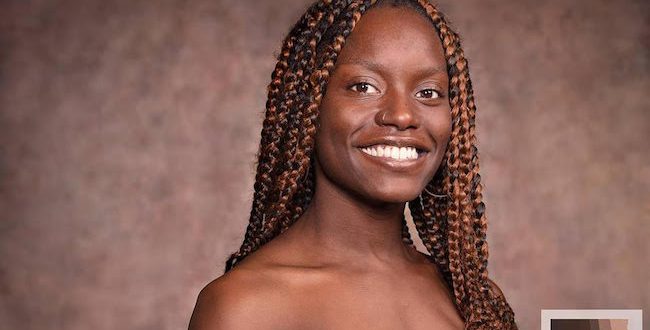 When I arrived at the El Que, to interview her, Deva Logan was sitting at a cozy table with friend and co-conspirator, Annette Farrell, director of FemFest.  Logan, who has been modeling professionally for over 12 years, at 37, doesn’t look a day over 25. Farrell was glowing with creative excitement and collaboration. The two share a lot in common as art event organizers. They invited me to sit down. Farrell, director of FemFest announced she had just received the new SAGA Grant for FemFest. We congratulated her.

“It was back in August during First Friday. I was the only black artist. I asked myself, where are all the artists who are black and brown in Spokane? This is an experience commonly shared by black and brown people of Spokane, of going to an art showing or event and being one of a few or the only black or brown person there. Think about what that’s like. Where’s the representation? So Shades of Me became my passion project to showcase the talent of non-white artists and performers in the Inland Northwest,” she said.

I asked her about representation at other popular art shows like Terrain And FemFest.

“FemFest had black and brown artists, but they were mostly to the side. Terrain, in my opinion, has not made it a huge focus in the past to highlight the non-white artists in the area. More than 90% of our artists at Shades of Me are American descendants of slaves. We have artists and performers from Brazil and the Philippines as well,” she said.

Farrell made the point that FemFest’s previous venue was really small compared to what it will be at the downtown Spokane Library this year, where she reassures that the art will be better seen with brighter lighting, so no one will feel they are being sidelined.

I asked Logan if she is looking for more co-collaborators.

“I want to see who is gonna show up,” she said. “Who supports black women? Who will patronize brown artists? Art is an independent process, it’s freeing. We need this space. I’m tired. I’m exhausted. I question everyday if this town can handle my personality, my words. I stand for my truth. I grew up climbing trees in the countryside of a small town in Michigan. I used to go out picking berries with my dad. My mom always put me in a white dress for church every Saturday. I was what you call a free black child, have you heard of that?”

I wasn’t sure if Logan meant a formal organization or group so I asked her to tell me about it.

“It means I grew up surrounded by black excellence. I went to a small two room black private school in the country. I attended Calvin Center SDA until High School. I attended private school until college. The people I knew had degrees. They were historians, graduates with PhD degrees in everything from music to psychology. The city I grew up in was a stop on the underground railroad,” she said.

I asked her to tell me more about herself growing up in such a wonderful place.

“I was an only child. I wore glasses then and read the encyclopedia for fun. I was what you call a nerd,” Logan laughed, then continued. “I liked to color growing up. I’ve always been skinny and independent.  I liked to listen to classical music. I taught myself to play the bassoon. I was a church youth leader at 13. Now, if I see something that needs doing, I set out to do it. I want to bring a piece of the East Coast to Spokane.”

Shades of Me Art Showcase continues today at the Spokane County Fair and Exhibition Center.

Tags femfest shades of me