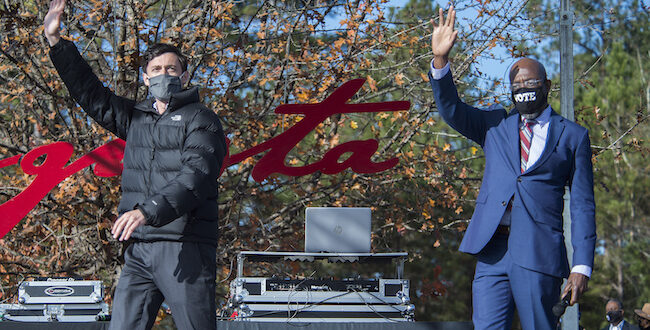 Jan. 6 was my birthday — also the Feast of the Epiphany. It began as a true Epiphany, a day of wonder.

The State of Georgia had not only elected two Democrats as its senators, it had elected its first African-American senator, its first Jewish senator, and the first millennial senator – the youngest senator in the country. It was a day for feasting and celebration! It should have been a day of wonder and awe.

Instead it was turned into a day of infamy, by a violent, armed coup attempt against the United States government – a coup incited and inflamed by the current president in his megalomaniac attempt to keep his grasp on the office of president, after losing an election already stacked in his favor. On Tuesday, Jan. 5, voting in Georgia’s run-off elections for U.S Senators ended. By late Tuesday night, it was clear that Georgia would be sending The Rev. Raphael Warnock and Mr. Jon Ossoff to Washington. This was a historic moment that would have dominated the news cycle for days. But within hours, the news media were focused instead on the violent coup attempt by the largely white male sycophantic followers of a white male president.

Yet again, white people had usurped everyone’s attention, when it had been so very briefly focused on people of color. We shouldn’t have been surprised. It has been ever thus in this country. And yet, many of us really thought Wednesday, Epiphany, would be a day of celebration, instead of a day of infamy.

Even more disturbing is the STARK contrast between the way in which the various law enforcement agencies treated these white traitors and the way in which they treated peaceful protesters (many of them people of color) last June 1 when they violently cleared away legitimate, legal protests so that this same white male president could walk from the White House to St. John’s Episcopal Church for a photo-op at the church. An event for which the permission of St. John’s had not been sought – likely because the White House knew it would not have been given.

It is hard to imagine a more consummate example of the systemic racism in this nation. Both events took place on virtually the same ground, with the same law enforcement authorities in charge. In June, people were assaulted with rubber bullets and pepper spray, and pushed out of Lafayette Square where they had been lawfully assembled. This week, terrorists were treated with such deference that they successfully breached the U.S Capitol and entered, practically at will, the chamber of the House of Representatives and legislators’ offices – including the office of Speaker of the House Pelosi. The safety and lives of members of Congress were put at risk by the failure of law enforcement officers to do their job in the face of a rioting mob of white people.

We cannot continue to allow this ignominy to continue in our name. We must, as citizens, as Christians (for many of us), as decent human beings, we must join our voices into a loud, demanding chorus saying, “No more!” “Not in our name!” We sing with Sweet Honey and the Rock, “We who believe in Freedom cannot rest until it comes!”

Previous The Wisdom Of The Elders. They’ve Seen This Before.
Next Interfaith Voices: Domestic Terror Attack and Faith Divides