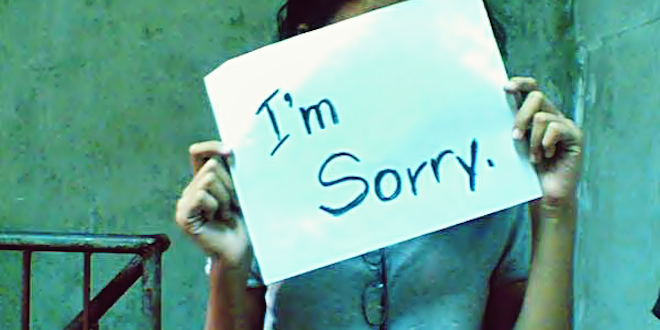 An apology is where it has to begin

Last month, I wrote about the power of words in Judaism. I focused on filling one’s mouth with thankful words, but lashon hara (evil speech) does exist. Sometimes it exists in our own mouths or in our own fingertips and causes pain to those around us.

In Judaism, on Yom Kippur, we ask G-d to forgive the sins we committed against him, but in order to be forgiven for wrongs we’ve committed against others, we have to offer our sincere apologies and ask for forgiveness.  G-d can forgive us for transgressions against him, but for transgressions against other people, the power of forgiveness lies with those people.

According to Maimonides, in chapter 2 of Hilkhot Teshuva, there are three steps to teshuva (repentance, literally “Return” to G-d).

To find forgiveness, we must first recognize and stop the behavior. Whether we shouted insults at someone in public or replied to a private e-mail a bit snarkier than we intended on a particularly exhausting day, we have to see that we’ve caused others pain and we have to make every effort to not say such things again.

We have to step outside our own wants and needs. If we behave like stubborn children who stomp our feet and insist we were right—concerning ourselves only with our own point of view, then we cannot grow, we cannot mend, we cannot seek teshuva. While some may immediately recognize and regret that they’ve caused those around them harm with their words, others may insist they did nothing wrong. Even in cases where we may have said something we truly believe, maybe we did so in an unkind way. Maybe we were so concerned with our own strong feelings on a matter that we failed to take others into account and so we said or typed things that caused them irritation. It is our responsibility to recognize that we have hurt others and act accordingly.

Most importantly, we must express remorse not just to ourselves, our close friends, or G-d, but to the person wehurt.  This may be the most difficult part. It means not only admitting we were wrong, but doing so to other people. It also requires us to step up and do something. We can’t be forgiven by simply recognizing our sin or even regretting it. Apologizing and asking the person we hurt for forgiveness may be extremely uncomfortable, but it is essential.

Previous Fasting shows to have multiple benefits
Next In Spokane, “The ugly face of Islamophobia” reared its head