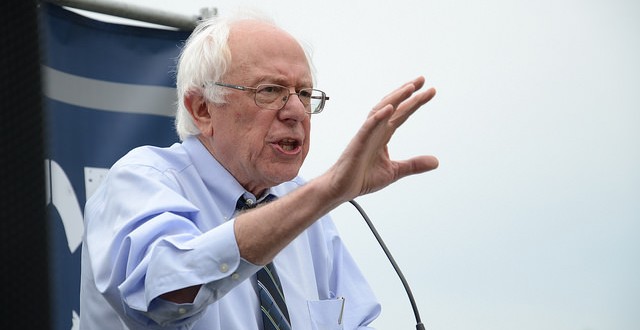 Bernie Sanders and AFGE leaders, staffers and activists participate in #StopFastTrack rallies in the D.C. metro area during the month of April. Flickr photo by AFGE

On Dec 17, 2010 a young man by the name of Muhammed Bouazizi set himself on fire in the streets of Sidi Bouzid, Tunisia. After experiencing years of harassment and humiliation at the hands of municipal inspectors while he tried to sell fruit, he lit a fuse that would lead to the crumbling of Ben Ali’s regime. I was vaguely aware of these developments at the time, but did not understand the magnitude of what was unfolding until I was able to talk to my Arabic teacher, a brilliant Tunisian woman at Gonzaga under a Fulbright Scholarship. She went back to Tunisia for holidays and was unable to return to America until after the turmoil subsided.

A year before this, we had heard talk of “revolution” in the United States. Conservative activists, talk show hosts and organizations lashed out at what they saw as corruption and government overreach. Rallies and demonstrations were held, Tea Party Patriot organizations flowered across the country and dominated mass media coverage. They preached a simple but effective message: We had gone too far from the cherished ideals of the Framers by allowing government to intrude into every aspect of our lives. Their remedy? Revolution. But none of that was enough. While they were able to make inroads into positions of power, their revolution never materialized. Perhaps it was due to the fact that they were never grassroots to begin with. Or maybe it was because they were quickly co-opted by party leaders. Whatever the reason, their calls for revolution went largely unheard and unfulfilled.

Fast forward to our current presidential election campaign. Remnants of the Tea Party still exist, but they are not the ones calling for revolution this time. Now, it is a Democratic Presidential candidate and his followers. Much like the Tea Partiers before them, they see corruption throughout our current political system and they are passionate and angry. Unlike the Tea Partiers before them, they see government as not doing enough to live up to the ideals of this country. Where Tea Partiers saw government intrusion into the market on behalf of liberal interests, Sanders and his followers see a lack of action on behalf of government as part of the will of monied interests set on hoarding social, political and economic capital all to themselves; and so the term “political revolution” has become their rallying cry.

It’s too early to say with 100 percent certainty what the fate of these new-found calls for revolution will be, but my best guess would be: They will end up in much the same situation as Tea Partiers are in today, with a slight variation of the norm, but without a revolution. How can it be that one man setting himself on fire for having his fruit confiscated by a government employee ignites a revolution in Tunisia, but a constant string of injustices will result in business as usual in America? Simply put, we are not talking about a true revolution when we use those words. We are too comfortable. We have too much to lose. And perhaps most critically, what we call revolution is reform by another name.

Revolutions that truly alter systems of power rarely take place within those systems for good reason: The system will either crush those inside it trying to make true change, or it will adapt ever-so-slightly enough to placate everyone but the fringe. Whether it achieves this through apathy, co-optation or incremental reform is dependent on the situation, but if it can find a way to defang you it will. This is perhaps the most mystifying aspect of Sanders’ call for “political revolution”: He couches his reforms in the language of revolution, but he acquiesced to the system long ago when he made a decision to work within it.

So what does his so-called revolution look like? Well, a lot like what FDR, Truman and Lyndon Johnson advocated for decades before he stepped foot into Congress, except instead of being driven by wonky technocrats in DC this “revolution” is to be powered by the people. This is a noble vision, of course. Yet, there is something deeply disingenuous about calling this a “revolution.” For suburban America, perhaps it is. If that is the case, however, it says a lot about how far away from any real revolution we truly are.

Excellent analysis, as always. I would just add that if politics and law have taught me anything it’s that you get at most half of what you demand. I think there are many pragmatists in the pro-Sanders movement who demand “revolution” because they believe it’s the only way they’ll get meaningful reform, which is their true goal and with which they’d be content. Frankly, at this point, I don’t know whether I’m such a person or not. I know that a revolution is needed, that the system is fundamentally and structurally disordered and only radical change can propel us forward to the next step (that being a system that grows beyond the vision and foresight of its creators to become fundamentally and structurally disordered itself, thus necessitating another revolution… and the wheels on the bus go ’round and ’round). I know the material conditions for such a radical change–massive inequality and corporate negligence to fan the flames of discontent, a robust communications infrastructure to coordinate a movement that is both genuinely grassroots and genuinely global, a knowledge base that includes viable alternative models–are already in place, but I fear the will to act is lacking.

You’re right. We have grown too comfortable, and with that comfort has come a degree of complacency, and also a degree of impatience–we tend, as Americans, to want to solve our problems in a single, grand gesture, and then go back to our oversized televisions feeling as though we’ve accomplished something. And as you know better than most, meaningful change is more often the result of prolonged, protracted, often obscure and inaccessible processes grinding away in offices and meeting rooms in thousands–possibly millions–of places in this country alone. The sprinters may be flashy, but the marathoners go much, much farther (to clumsily deploy a sports metaphor).

I don’t know whether or not to expect a revolution in my lifetime. I doubt I’ll live to see one–I kinda hope I don’t–but I know it’s coming. The anger is there. The thirst for change is there. The knowledge of how and what to change is there. All that’s lacking is the spark to ignite it, and I confess I have no idea what form that could possibly take.

We’ve become too comfortable and a large portion of the population feels helpless to bring about change. In my lifetime the closest thing I’ve witnessed to a revolution in this country was in the 60’s. Young people were willing to take to the streets at the risk of their lives. I don’t see that sense of commitment today.

I hope you’re wrong, but I fear you’re right. Right now I’m reading “Occupy Spirituality,” a book-length dialogue between Adam Bucko and Matthew Fox about the spirituality that arose from the “Occupy” movement and its subsequent history. They argue that, while the members of the movement are no longer (for the most part) marching in the streets, they are expressing their idealism elsewhere–in the formation of parallel economies and communities. Frustrated by the system’s resistance to reform and structural corruption, they are choosing to create alternatives rather than trying to force institutions that they believe (rightly or wrongly) to be irredeemably corrupt to embrace more just alternatives.

I’m not sure what to make of their arguments–my own belief is that we all have a duty to try to reform institutions, rather than simply “opting out.” But it may well be that their approach, of quietly being the change they wish to see in the world, is the more effective, more rewarding, and will ultimately provide much of the groundwork for that change on a systemic level.