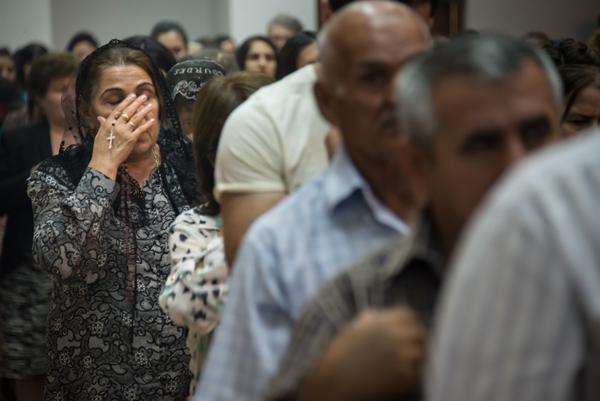 A Chaldean Catholic woman holds a rosary during a mass at Saint Joseph's Chaldean Catholic Church in the Ankawa neighborhood of Erbil, Iraqi Kurdistan, June 27, 2014. Many Iraqi Christians have fled to Erbil from other parts of the country because of violence from Muslim extremists.

(RNS) From the moment they set foot on North American soil, the Puritans who came to the continent viewed their “errand into the wilderness” through a biblical lens, seeing themselves as modern-day Israelites building a New Jerusalem in the New World.

But today, the culture war descendants of those Puritans are feeling increasingly alienated and even persecuted in the society they once claimed as their own. They’re shifting to another favorite image from Scripture — that of the Babylonian exile, preparing, as the ancient Judeans did, to preserve their faith in a hostile world.

“We live in a time of exile. At least those of us do who hold to traditional Christian beliefs,” Carl Trueman, a professor of church history at Westminster Theological Seminary, wrote in the latest edition of the conservative journal First Things.

Rampant secularism and widespread acceptance of sexual mores once deemed taboo, Trueman said, mean that “the Western public square is no longer a place where Christians feel they belong with any degree of comfort.”

Trueman was so convinced of that reality that he didn’t argue whether internal exile was an option. Instead, he wondered which form of Christianity was best equipped to survive this inevitable relocation.

His answer, perhaps not surprisingly, was that his own Reformed Protestantism was superior. That prompted a number of well-known Christian commentators to weigh in and champion their particular denomination.

Rod Dreher at The American Conservative argued that his own Eastern Orthodox tradition was best suited to survive the “internal exile.” That, in turn, prompted a post by Baylor University humanities professor (and Anglican) Alan Jacobs, who also dinged Trueman for encouraging sectarian “braggadocio.” Jacobs and New York Times columnist Ross Douthat (a convert to Catholicism) then went back and forth on Twitter, and so it continued.

Leaving aside the confessional competition, the very premise of the exile narrative might be surprising to those who see Christian conservatives as driving, not leaving, the nation’s political dynamics.

But there is another strain of culturally conservative Christianity that views the political path to renewal as putting, as the psalm says, too much trust in princes. In fact, Christians in that tradition see (and many political scientists agree) that the electoral and cultural trends on issues like gay marriage are moving inexorably against their values. And they don’t put much faith in the Republican Party to save them.

Hence the comparisons of American Christians today to ancient Israelites who were sent into exile in the sixth century B.C. by the Babylonian King Nebuchadnezzar, after his armies sacked Jerusalem. “By the rivers of Babylon, there we sat down, yea, we wept, when we remembered Zion,”  the psalmist records.

In the U.S., there is some precedent for this sort of withdrawal: after the famous1925 Scopes “Monkey Trial” in Tennessee, when creationists won a court case but lost the larger argument, fundamentalist Christians were so aggrieved by the backlash against them that they retreated into their own Bible Belt enclaves for decades.

It was only in the 1970s that these believers — largely white, Southern evangelicals — re-emerged (ironically under the banner of Jimmy Carter, at least at first). Using the bully pulpit of the Moral Majority and later the Christian Coalition, they sought to reclaim their stake in American culture, largely through Republican politics.

But those campaigns always left some Christians uneasy. Such altar-and-throne alliances risk compromising the church, the critics said, and they have brought no clear victories.

As far back as 1981, moral philosopher Alasdair McIntyre’s book “After Virtue” argued that the idea of inevitable societal improvement is an illusion. Amid the ruins of civilization, he said, believers must adapt the model of St. Benedict, the sixth-century founder of Western monasticism, and reconstitute themselves into small, intentional communities of faith largely removed from the surrounding culture. Dreher calls this the “Benedict Option.”

Now, that idea seems to be gaining a wider hearing, albeit with various interpretations.

Writing in First Things earlier this year, cultural critic Peter Leithart said that what he called “Christian America” is indeed over and “it’s past time to issue a death certificate.” But he cautioned traditional Christians not to “slink back to our churches.” Instead, he said they should try to recreate a civic Christian culture at the local level to foster what he called“micro-Christendoms.”

Yet others see all this talk as indulging in what Alan Noble called the “Evangelical Persecution Complex.” Writing this month in The Atlantic, Noble, an assistant professor of English at Oklahoma Baptist University, defined that complex as the temptation “to interpret personal experiences and news events as signs of oppression, which are ostensibly validations of our commitment to Christ.”

In The Christian Century, the flagship magazine of liberal mainline Protestantism, Lutheran pastor Benjamin Dueholm also weighed in, echoing Noble’s criticism and calling the exile idea “a dubious and highly troubling premise” because it “trivializes” the experience of real exile, such as Christians and religious minorities who are suffering today in actual Babylon, or what we call Iraq.

“Nothing in the experience of white American Christianity bears the slightest resemblance (to that), and it is unlikely that anything will any time soon,” said Dueholm, associate pastor of Messiah Lutheran Church in Wauconda, Ill. “We still enjoy a kind of wealth, prestige, institutional heft, political clout, and legal protection that would stupefy Jesus of Nazareth.”

Responding to Dreher in The American Conservative, Samuel Goldman also took issue with the “Benedict Option,” writing that the story of the Babylonian captivity offers another alternative to withdrawal — what he calls the “Jeremiah Option.”

The prophet Jeremiah, Goldman says, counseled the exiled Judeans to unpack their bags, set down roots and “to live in partnership with Babylon” while maintaining their Jewishness and seeking holiness. Goldman calls it “engagement without assimilation,” a more optimistic but pragmatic approach to difficult circumstances.

Dreher welcomed Goldman’s critique but insisted that in his view “the trend lines of Jewish and Christian belief in modern America make Benedict your man, not Jeremiah.”

How will this all play out? These could simply be the interesting but ultimately parochial musings of a few religious intellectuals. Or they could articulate a genuine sense of dislocation among tens of millions of American believers.

That alienation could lead them to internal exile and away from the national mobilization that has fueled our political debates for a generation. That would be a milestone in our nation’s history.

Then again, the Babylonian captivity didn’t last forever, and after 70 years the Jews returned to Israel, transformed, and in some ways stronger than ever.

Previous Hal Taussig and A New Testament: An interview explained
Next Income inequality exists in Spokane