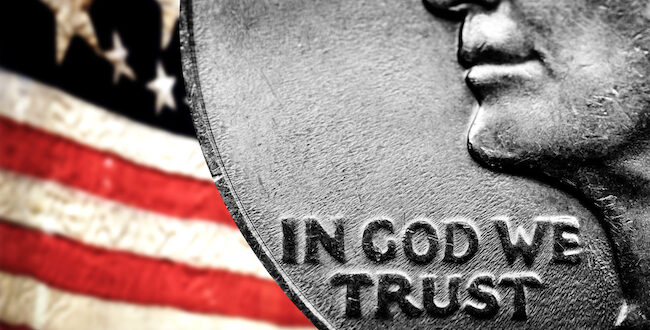 “Americans don’t need God. They already have everything.”

So a friend from Africa told me after a few months in our country. “Most Africans have nothing,” he went on, “but they have God.”

Of course many Americans would find his comments on Americans to be offensive and absurd. We boast of our trust in God on our dollar bill. In our Pledge of Allegiance we proclaim that we are “one nation, under God.” (Does the fact that we are hardly one nation these days call into question our being under God?)

My African friend is hanging out mainly with people like me—white middle-class folk with enough money to afford food, a home and a car. We attend church and declare our faith in God, but do not do so in a charismatic, demon-expelling, healing way that satisfies my African friend.

Some scholars point out that the form of Christianity practiced in many parts of Africa is probably like that practiced by the early church, with its emphasis on casting out demons, faith healings, and creating a strong supportive community.

Unfortunately, the Prosperity Gospel has also taken hold in parts of Africa. This is the pseudo gospel that preaches that God wants us to be rich, and that liberally supporting God’s preachers paves the way to our wealth.

The Prosperity Gospel has deep roots in America. In “The Way to Wealth,” a 1757 compendium of his proverbs, Benjamin Franklin quipped that “God helps those who help themselves.” In you have pulled yourself up by your own boot-straps, surely God would give you an extra boost up the economic ladder.  Once up, maybe you feel you don’t need God anymore, as my African friend asserts.

“God helps those who help themselves” is so often quoted that many assume this proverb comes from the Bible. In fact, its perspective is unbiblical. Time and again the God of the Bible is on the side of the helpless who are in need of deliverance and of assurance that they are blessed no matter their financial state.

The Poor, The Wealthy

The Beatitudes of Jesus as presented in Luke’s Gospel even suggests a bias toward the poor: “Blessed are you who are poor,” reads the first Beatitude, “for yours is kingdom of God” (Luke 6:20 NRSV). The rich, on the other hand, are warned that woe may be on the way (Luke 6:24).

Note that Jesus is not offering pie in the sky to the poor. Instead, they have the kingdom of God in the here and now. How so? Perhaps because with poverty comes inter-dependency, community, a need to share to survive. This happened when the Israelites shared manna in the wilderness and when those who came to hear Jesus shared bread and fish. To give a modern example, it happens in the potlatches of the Coeur d’Alene Tribe.

Martin Luther King, Jr., dreamed that America as a whole would become God’s beloved community, with shared values, shared wealth. But is this possible?

I’m writing this at the beginning of March, during the Russian invasion of Ukraine. A conservative friend of mine thinks that this may bring Americans together in a shared need to offer support. I’m not sure that we are humble enough, broken enough, to have this happen.

Those in Ukraine certainly need our prayerful, political, and financial support. And they need God in their struggle against tyranny. But whose God? According to Mark Silk’s column “Religious National and the Invasion of Ukraine,” Putin seems to believe that he is defending the Russian Orthodox Church against Ukrainian Orthodox separatists. Nationalistic claims that God is on our side undermine faith in a God who is on the side of the oppressed everywhere.

And how about those heroic folk in Russia who are protesting Putin’s war and being arrested by the thousands?

To them and the brave Ukrainians we say “May God Be With You” and really mean it.

Previous Ask A Baha’i: Obligatory Prayer
Next On Buying a Car