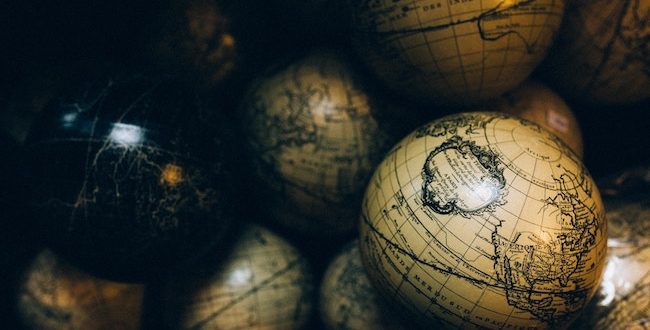 An old activist friend of mine, Fran Peavey, used to travel the world’s benches in the 1970s and 80s with a simple sign that read, “American Willing to Listen.” We’d be looking at a different political landscape now if only more of us had.

Flying home from a recent trip, I couldn’t reach any of my pals for a ride when I landed. Spokane International Airport is so small that the taxi stand can be a lonely spot until you phone a taxi company. But not this time.

A somewhat rumpled white Honda waited in the shade, a white “taxi” sign wedge atop to identify the humble chariot. With enthusiasm and consideration, a young man jumped out of the car to help me. He took my bag and placed it gingerly in the trunk as I seated myself in the back seat.

Although I pride myself on puzzling the geography of accents, when he spoke, his stumped me: a rolling “r,” some clipped consonants, a rhythm that clearly hearkened to another music of language. Having an irrepressible curiosity (as well as having grown up in the suburbs of New York) I usually get right to it: “Where are you from?” I asked in the most un-offensive way I could muster. These days, that simple query can be radioactive. His body stiffened and he examined my face in the rear view mirror, determining if I were friend or foe.

“Afghanistan,” he said, after a long pause. I’d never met an Afghani before; that’s why I couldn’t recognize his accent.

“That’s amazing!” I responded. “Tell me about your long journey to Spokane, Washington.”

Black hair shaved military style, he wore a leather bomber jacket with faux military patches on it. A bold tattoo flashed out from under his cuffs when he grabbed the steering wheel. He turned around to look at me directly and I saw a face scarred both externally and internally. A thirty-something whose features detailed a difficult life journey. He smiled, turned back to the windshield and began to drive.

In the six miles between the airport and my home, in the suddenly intimate bubble of his car, I listened and learned. He was fluent not only in English, but in three other languages as well. His father, a general in the Afghan army, had been shot by the Taliban. The general’s only son, he’d escaped to Russia where he lived for seven years. After that he lived in Jordan and Turkey until he finally attained a special visa to move to the US. Landing in California with an Afghani community, he eventually ended up in Spokane where a close friend invited him to settle.

As he spoke, I began to wonder how my very white town had welcomed him, a non-Caucasian. “How’s our town been treating you?”

Instantly, he wavered between crying and ranting. Tears welled while his hands gesticulated hotly. “You Americans don’t know how to be hospitable! Arab cultures treat everyone like family if you are our guest”—he pantomimed an embrace—“but here, after a year, I might only get a short little bro fist. I don’t have a chance to be friends. People look at me like I don’t belong here and say as much. They even resent my car—as if it doesn’t belong on the street!” I squirmed, ashamed, noting silently that the word, hospitable, shares the root with hospital, the place we go for healing and life-saving measures.

I know exactly the quality he’s referring to, I tell him. I’d been to all the countries he mentioned. I know what he’s saying is the truth. The way I was embraced and my status as stranger permanently revoked by new friends in the Middle East. The women who treated me as a sister, who fed me over and over, who got up on the kitchen table to demonstrate proper belly dancing. The families in Egypt and Turkey whose generosity towards my family appeared bottomless. We could have moved into their homes and they wouldn’t have complained. My most astonishing memories—far beyond the canyons at Petra or the homes carved from volcanic tuff in Cappadocia—was this quality of hospitality I’d never encountered in my own country, even by kin.

When I read from my first book on Islam at a bookstore in Jordan, Ayat Jamilah: a Treasury of Islamic Stories for Children and Parents, people wept. That an American would take the time to understand, to listen to their lives and share it in a book to other Americans was the greatest respect they’d ever been shown by a Westerner.

I apologized to my taxi driver for the hostility of my city and for my country towards immigrants. On the most practical level it doesn’t even make sense: if we make someone feel un-welcome, un-American, we may push them into a corner that will in fact endanger the commons. I knew enough of Afghanistan’s war-torn history as a many-decades battleground between the interests of the United States, Russia, and Afghani tribes to feel further ashamed.

As soon as he got an education and a better job, he said, he would bring his mother and sister over. Clearly, he had needed an American willing to listen. When he pulled up to my house, parked in my driveway and dashed to the back to fetch my suitcase, my heart as well as my conscience ached. I paid, wished him luck and Godspeed. I meant every word of it. My only regret is that I didn’t ask for his telephone number so I could invite him and his other Afghani friends to dinner. I owe at least that much for the kindness shown to me in Muslim countries.

One of my spiritual teachers asserts that the shortest bridge between any two people is to listen well. Really listen. Perhaps when you next find yourself in a long line at the checkout counter, look around. Find someone standing near you who might feel like a stranger in America’s midst. Be warm, kind, and hospitable. Then get ready to listen.

Practice listening skills with children. In Sing to the Power, a Tapestry of Faith curriculum for grades 4-5, “Recording Oral Histories” in Session 8: The Power of Listening is an activity that guides children to prepare, conduct, and reflect on an interview with an adult guest. The session also has other activities, suitable for a wide age range of children, focused on listening skills.

Previous Ask a Catholic: How does penance work?
Next OUTCRY Tour: I felt safe. I felt at home. I felt at peace.