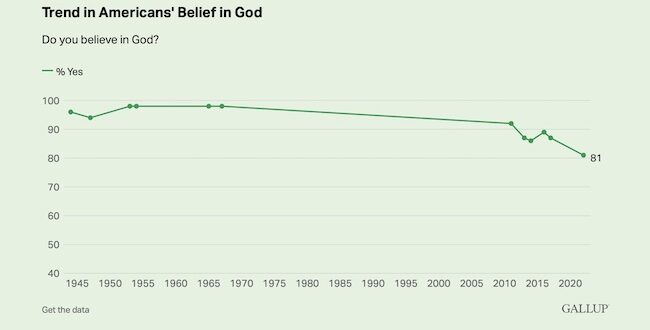 Am I Surprised That Belief in God Has Dropped? Nope!

Am I Surprised That Belief in God Has Dropped? Nope!

There are probably dozens, if not hundreds, of issues affecting people’s belief in God in the United States, but I’m just going to focus on four, because that’s how many I’m pretty sure about. And I’m also going to narrow my opinion to just individuals who have become ‘godless’ among the Christian faith. But first, here’s some background on a recent and significant decline in the percentage of people who believe in an Almighty creator.

Gallup published the results of a poll, in June of this year, that they’ve been doing since 1944.  Asking the question, ‘Do you believe in God’, 81% of Americans answered yes. Now you might think that’s a very large number, and it is, but from the origin of the poll, the results have never been lower than they were this year.  The number stood at 96% the first year and from 1953 – 1967 it was at an all-time high of 98%. A slow but steady decline began after that, but even then, until between 2011 and 2013, the number never dipped below 90%. So why the recent ‘sudden’ drop?

I think people are…

1. Struggling with the concept of a ‘loving’ God and slipping off into not believing at all.

As I’ve talked with people about spiritual issues, one of the main questions thrown my way has been, “How could a loving God…”!  You fill in any of the many drastic, and seemingly unexplainable, tragedies that befall our citizens and countries, and you’ll have the gist of the type of questions I’ve heard

2. Confused by what ‘believers’ in God are supposed to believe. There are estimated to be at least 200 denominations in the U.S., and thousands more worldwide, and there have been disagreements over doctrines since the very beginning.

According to a 2021 article on LiveScience.com, “one of the most notable early schisms, the Arian controversy in the early fourth century, divided the church on Jesus’ relationship with God.”  And, as their article continues, it hasn’t stopped since.

3. Embarrassed to be considered spiritual, especially Christians. Much of the political rhetoric that is slamming the country today is from proclaimed Christians, often church leaders.

4. I think this could be a primary reason for the other three — a large portion of ‘Christianity’ isn’t made up of actual Christians in the first place. If that’s true, and I’ll share why I think so next, then falling prey to the first three issues or walking away altogether doesn’t seem like it would be that big of a deal.

My opinion about the makeup of the Christian church isn’t scientific or proven factually but, there has been a behavior, that I’ve experienced a surprising number of times, that certainly seems to give credence to my opinion. So what was it?

In a church my wife and I attended in the San Francisco Bay area, for nearly three decades, I was privileged to be a deacon for several years. One of our tasks was interviewing prospective members.

The church welcomed anyone to attend services but wanted members to be Christians for a number of, what I thought were, very good reasons. Therefore, during these interviews, we would ask them to share how they had become believers in Christ. For many of the same reasons, we also had people being baptized share their faith story.

The membership discussions were held by two church members, an elder and a deacon, and between the interviews and water ceremonies, I heard over 200 people explain their story of becoming a Christian. And since the goal of the church was to ensure that new members were Christians, I figured that the stories I heard, if shared with someone without faith in Christ, would have communicated to that person what was necessary to become a Christian. Boy was I in for a big surprise.

Not a single testimony that I heard clearly delineated, based on my understanding of the gospel message, how a person could become a Christian. Now that doesn’t mean that all the people who shared their story weren’t true believers. But it’s hard for me to imagine that all 200 of them could be, and that has made me wonder all these years where each of them stood in their relationship to God.

It also gave me a plausible reason, when I read the article by Gallup, to come up with this as a major rationale for the declining numbers.