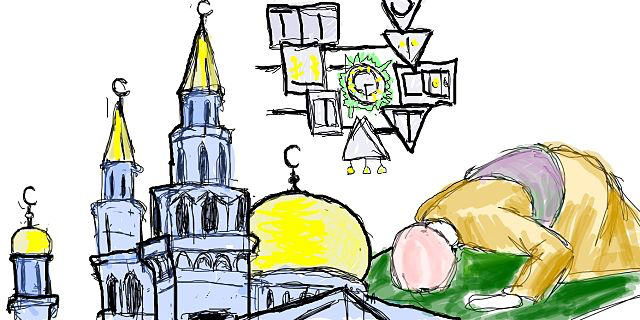 Eid Al Adha, translates to “Feast of the Sacrifice,” is one of two major Islamic holidays that is observed annually. The celebration immediately follows Arafat Day, which is the second day and the climax of the annual Hajj (pilgrimage) rituals. Eid Al Adha this year will fall on Monday, Sept 12.

What is its significance?

Eid Al Adha celebration commemorates Prophet Abraham’s, peace be upon him, obedience to adhere to the command of Allah to sacrifice his dearest and only son, at the time, Ishmael.

Although Prophet Abraham, peace be upon him, was ready to sacrifice his son Ishmael, he sought his son’s consent. Ishmael did not show any hesitation and said: “Father, do what you have been commanded. You will find me Insha’Allah (by the will of Allah) to be very patient.”

Allah has conveyed to us this beautiful story in what we believe is His final revelation to humanity, the Quran, in Surah 37, verses 100-112.

Allah says what translates as:

“My Lord, grant me [a child] from among the righteous”. So We gave him good tidings of a forbearing boy . And when he reached with him [the age of] exertion, he said, “O my son, indeed I have seen in a dream that I [must] sacrifice you, so see what you think.” He said, “O my father, do as you are commanded. You will find me, if Allah wills, of the steadfast.” And when they had both submitted and he put him down upon his forehead, We called to him, “O Abraham,  You have fulfilled the vision.” Indeed, We thus reward the doers of good. Indeed, this was the clear trial. And We ransomed him with a great sacrifice. And We left for him [favorable mention] among later generations: “Peace upon Abraham.” Indeed, We thus reward the doers of good. Indeed, he was of Our believing servants. And We gave him good tidings of Ishmael, a prophet from among the righteous. And We blessed him and Ishmael. But among their descendants is the doer of good and the clearly unjust to himself.” — Quran, Surah 37 (As-Saaffat), verses 100–112

How is it celebrated?

Muslims begin their day by performing ablution and praying the Fajr Prayer (Dawn Prayer). They take a bath, apply their favorite fragrance, and dress in their best clothing before leaving for the Eid Prayer. Eid prayers are offered in congregation in the morning when the sun has completely risen.

To commemorate Prophet Abraham’s, peace be upon him, willingness to sacrifice Ishmael, it is customary for Muslims to sacrifice an animal, which is usually a ram, a goat, a cow, or a camel. The meat of the animal is then divided into three parts: one part for the family to enjoy, one part is given as a gift to friends and relatives, and the final part is given to the poor and needy to enjoy.

Eid Al Adha is an important time for charity, and those who can afford it make an effort to ensure they help those less fortunate.

Muslims visit one another to celebrate and wish each another a blessed holiday, greeting one another: “Eid Mubarak!”

Saleh Elgiadi is a founding member of the Spokane Islamic Center and has previously served on the board of directors in different capacities for more than 10 years. He is married with children and has been a Spokane resident since the late 1970s.

Saleh Elgiadi is a founding member of the Spokane Islamic Center and has previously served on the Board of Directors in different capacities for more than 10 years. He is married with children and has been a Spokane resident since the late 1970s.