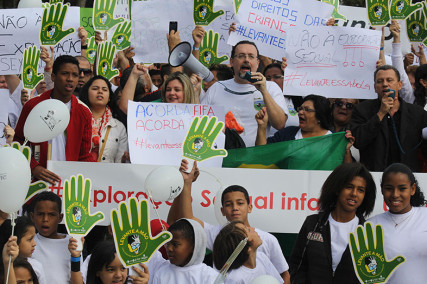 Ahead of the World Cup, Brazil’s churches work to protect children from sex abuse

RIO DE JANEIRO (RNS) As Brazil counts down to the opening of the World Cup on June 12, churches in cities hosting the international soccer tournament are not content to sit on the sidelines and cheer.

They’ve launched a nationwide campaign to raise awareness of the hundreds of vulnerable children at risk of sexual exploitation during the monthlong competition.

With an estimated 600,000 soccer fans expected to arrive in Brazil within a matter of days, the South American nation is under pressure to combat its international reputation as a destination for child sex tourism.

Church leaders fear the heavy flow of tourists during the games could fuel an explosion of sexual trafficking of children and teens at fan fest locations around the World Cup arenas.

Thousands of youngsters will be on school holidays during the event, and the risks of exposure to criminal gangs and predatory individuals is significantly higher.

According to UNICEF, an estimated 250,000 children are sexually abused every year in Brazil and the numbers spike around major sporting events. Research from Childhood Brazil, a human rights organization designed to protect children, shows sex crimes against children increased by 66 percent during the 2010 World Cup in South Africa and by 28 percent during the 2006 games in Germany.

A network of Brazilian churches and nonprofit groups has joined forces to form Bola na Rede or “Back of the Net” in English, a nationwide campaign alerting tourists to the dangers facing the country’s children.

“Over the last three years, we’ve been preparing churches in the 12 cities, encouraging them to mobilize their congregations so they actively do something in the days leading up to and during the World Cup,” said Ronald Neptune, the national coordinator of Bola na Rede and a missionary with the United World Mission in Sao Paulo, referring to the 12 host cities.

“As Christians, we can’t just clap our hands and praise the Lord, we have to work to make a difference to the lives of the young people at risk,” he said. “We can be the eyes and ears on the streets and the motivating force that gets people out leafleting and speaking to tourists about how they can be vigilant to help protect our children.”

On May 18, over 97,000 Christians took to the streets in Brazil’s host cities in a nationwide day of marches.

Outside the World Cup stadium in Itaquerao, Sao Paulo, where the opening match between Brazil and Croatia kicks off on June 12, churchgoers gathered to protest peacefully with banners and posters. They then knelt in prayer for victims of sex abuse on the grass outside the stadium.

The Brazilian government is getting into the game, too. Last month, legislation was introduced increasing prison sentences and making those arrested for child sexual exploitation ineligible for bail. The government has also launched a series of advertising campaigns in English warning tourists that offenders will not escape prosecution.

“We need to keep our children off the streets,” Neptune said. “We’re supporting about 20 churches in each of the host cities who are planning to stay open with school vacation projects. They will provide Bible-related activities, games, sports and stories to occupy the children.”

In Porto Alegre, in the southern state of Rio Grande do Sul, Joane Morais knows what it’s like to be destitute. The 37-year-old mother of eight was sexually abused as a child and thrown out of her home when she fought off her attacker with a knife.

But last December Morais’ life changed drastically when women from a local Baptist church knocked on her door saying they were part of Bola na Rede and were working to protect vulnerable children and their families.

“Their involvement in my life made me realize the risks my children and others face,” she said. “Now I’ve started going out to talk to other vulnerable mothers to teach them about God’s love and the importance of protecting their children from the various forms of violence in our community, especially sexual exploitation.”

According to REST (Real Escape from the Sex Trade), a direct service faith-based charity in Seattle, raising awareness around major sporting events like the Super Bowl and the World Cup is essential, but providing a long-term service is crucial to making a profound difference.

“The World Cup in Brazil will provide an international stage to highlight the issue,” said Bridget Battistoni, REST’s chief operating officer. “But we know from experience that when the coverage ends and the cameras disappear there are still hundreds of people desperately needing help. We want the church and the people engaged in the anti-trafficking movement to be in it for the long haul, not just for the big moments.”

It’s a sentiment echoed by Neptune, who says Brazilian churches are only now awakening to the extent of the problem after decades of silence.

“The World Cup must be the start to what we do,” he said. “We need a cultural shift in our churches so our children are protected for the long term.”

Previous Behind Bars: Responding with love, respect
Next Tony Perkins, Gays and the Changing Claims of Orthodoxy