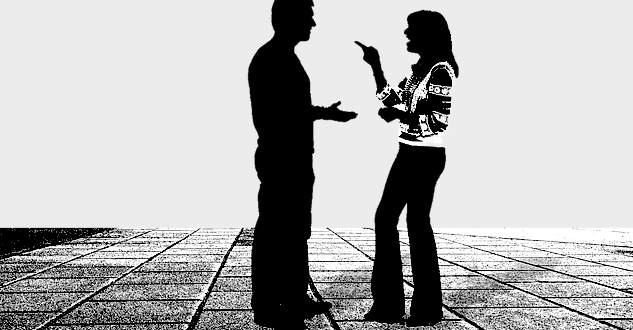 I wonder, though, if that is OK. To be uncomfortable. To acknowledge that someone with a different belief may be just as smart, just as sure, and just as passionate about the view they hold. And even while they believe differently, do they not deserve the respect we would like for our own views?

So why is it so hard to agree to disagree agreeably? And how can we make this process easier for ourselves to produce a kindness toward others with whom our opinions differ?

I think the first step is to be solid in our own beliefs. And where we are not sure, be humble and gentle toward ourselves, so that we can be that way toward others.

I find that most of the bickering and anger in our disagreements comes from a deep place of insecurity, even some doubt. And that’s OK. But it’s not OK when that insecurity presses one to be defensive, instead of humble, which results in a lashing out toward the person with whom they disagree.

Healthy belief comes from a source of settled sureness where one is at in their journey. That does not negate that one may still have some questions or that they will continue massaging their own deeply held beliefs.

However, if one is unsettled and unsure to the point of unkind defensiveness, perhaps before that person expresses his or her belief as if they are 100 percent certain, maybe they should do some more exploring on their own or do some verbal processing among people they respect and trust to work through any insecurities that may come off as disagreeable toward others.

Discourse need not be passive and timid; it can be a passionate hashing out amongst friends as you process what it is you truly believe. It can be uncomfortable, but it should not be unkind.

The second step is to recognize we don’t need to win. Belief is personal. It’s deep within a person, in their own private consciences. And it’s something that is built (or sometimes torn down) over time.

Some people approach disagreements with a scorched earth mentality, burning up not only what they see as a weak or false argument to dust, but destroying a person in the process. A flesh and blood person who has cares and concerns and thoughts and beliefs that are near and dear to their own hearts and embedded deep within their own consciences.

Winning, then, shouldn’t be the goal in our disagreements but understanding where the other person is coming from. Only then, can we respectfully disagree with their view with kindness and perhaps learn something in the process that may give our own beliefs more nuance.

Finally, but by no means the final word on the matter, we have to stop presuming the one with whom we disagree is the enemy. Americans, in particular, seem to have a knee-jerk reaction to anyone with a different opinion, that if they are not “with” me in this view, they must be “against” me in all views.

This is called splitting in psychology, which “is a very common ego defense mechanism,” according to an article on Psychologytoday.com by Dr. Neel Burton. “It can be defined as the division or polarization of beliefs, actions, objects, or persons into good and bad by focusing selectively on their positive or negative attributes.”

To avoid this kind of thinking, we should countenance as broad a range of opinion as we are able so that we can discern better what it is we believe.

For example, I try to hang out in news sources that present the facts in an unbiased manner. To do this, I regularly reference a media bias chart put out by Ad Fontes Media to inform me of the best sources to use so that I might be more discerning about what is going on in the world.

When I was in the Peace Corps teaching English conversation to my talented young students in Romania, I remember telling a class that the truth is usually somewhere in the middle. If we approach our disagreements with this in mind, I think it would produce a humility toward our own opinions and beliefs that perhaps we don’t see all sides as clearly as we think we do.

And that understanding will guide all our conversations with the idea that maybe I can learn something from someone who believes differently than I do. That they are not the enemy, but perhaps the vessel being used to better inform my own belief.