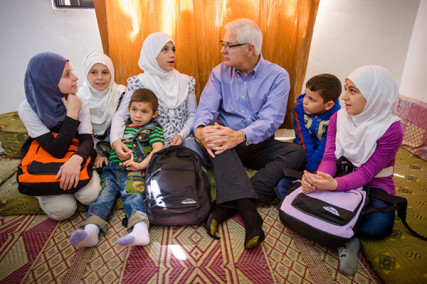 (RNS) World Vision found itself testing the evangelical boundaries in March when it announced it would recognize employees’ same-sex marriages. Within 48 hours, it reversed itself.

At its core, the reversal raised a stark question: Can you be an evangelical and support same-sex marriage?

Reverberations from the policy flip-flop continue to unfold. Last week, Jacquelline Fuller, director of corporate giving at Google, resigned from the international relief organization’s board. Faithful America, an online Christian community focused on social justice, had gathered 16,000 signatures calling for Fuller and John Park, another Google employee who sits on the World Vision board, to step down.

“Jacquelline Fuller did the right thing by resigning from the board of an organization whose values don’t align with Google’s commitment to inclusivity and equality,” Michael Sherrard, director of Faithful America, said in a statement. “Now it’s time for John Park to follow suit.”

Taking a softer position, a group of progressive Christians wrote in a letter released Wednesday (April 9) that they grieve World Vision’s reversal. “And, we call on Christian institutions to employ LGBT brothers and sisters in Christ who help further the mission of their institutions,” the letter states, acknowledging disagreements on both sides.

“There are committed Christians who believe, honestly, that a few passages in the Bible referencing sexual activity between people of the same gender have been historically misconstrued,” the signers say. “There are also committed Christians who believe, honestly, that homosexuality is sinful and flies in the face of what God desires.”

“I would like the world to know that there are many Christians who support the hiring of gay Christians in Christian institutions,” said Julia Stronks, a political science professor at Whitworth University who organized the letter. Whitworth is an evangelical university based in Spokane, Wash.

In many ways, the issue harkens back to other hot-button issues, many of them related to sex and gender. Christians have debated whether an evangelical could get divorced, support the right to an abortion or allow a woman to lead a church.

When announcing the reversal, World Vision President Rich Stearns hinted that the decision centered on whether sexuality was a core part of Christian beliefs.

“I think what we are affirming is there are certain beliefs that are so core to our Trinitarian stance, we cannot defer to frankly a small minority of churches that have taken a different position,” Stearns said.

But those who signed the letter said sexuality is not a core belief.

“I think the core issues for the Christian faith are that Jesus Christ, the son of God, died for our sins,” said Stronks, who said her family will renew its child sponsorship despite the controversy. “I understand that for many Christians, identifying sin is important and difficult. But these things are not central to what it means to follow Christ.”

In a blog post for The Gospel Coalition, LifeWay Christian Resources employee Trevin Wax asked: “Can an institution with an historic evangelical identity be divided on an issue as central as marriage and family and still be evangelical?”

“World Vision’s board has discovered an essential truth: the same-sex marriage issue is a truth serum for Evangelical Christianity,” he wrote. “As World Vision has learned, Evangelicals cannot declare ‘neutrality’ on this issue, and it cannot be fudged or finessed.”

The change caused some evangelicals to consider how they religiously self-identify.

A World Vision spokesman told RNS that the organization is still estimating how many it has lost and gained in recent weeks, but it estimates that 10,000 sponsorships have been dropped. After a call with World Vision’s Stearns, blogger Nish Weiseth wrote about how watching evangelicals drop their support impacted her faith.

“You want to know why I won’t identify as an evangelical anymore? I’ll just reply with ‘10,000 kids.’ Every time,” she tweeted.

At Patheos, however, Vermont-based pastor Zach Hoag said he is not willing to give up being an evangelical. “What if there’s more than the conservative evangelical majority, ever drawing lines in the sand, perfecting the art of picking up their ball and going home?” he wrote.

Over time, sexuality could become an issue like women’s ordination, something Christians agree to disagree on without questioning each other’s faith.

“The question is whether conservatives are going to be able to meaningfully articulate why this is a unique issue, and why more hangs on it than even the complementarian/egalitarian divide (over women’s roles),” said Matthew Lee Anderson, author of “Earthen Vessels,” a book about the body.

As many congregations have already split within mainline Protestantism, Northern Seminary professor Scot McKnight said that in 25 years, he suspects evangelical churches will be split on the issue.

“What has happened is that the same-sex marriage/same-sex legitimacy has become the focal point or scapegoat of the culture wars,” McKnight said. “It is Bible, theology and politics all rolled into one big monster.”

Previous Please welcome our newest intern
Next Near the Palouse