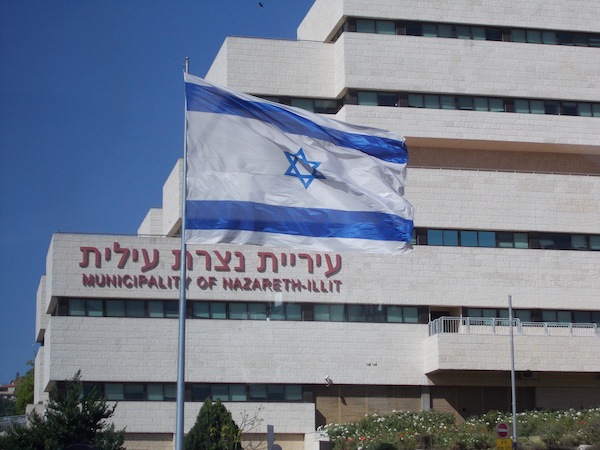 This is the first in a two-part series. Here is part two.

Earlier this summer, I returned from an overwhelming, surprising, and enlightening trip to what I apolitically call “The Holy Land.” This seems to be a good way to avoid a political discussion when it’s appropriate to do so by avoiding the words “Palestine”, “Israel”, “the illegally Occupied Palestinian Territories,” and so on. I traveled with an organization called Interfaith Peace-Builders in a group made up of different denominations of Christians (largely Lutheran), secular and religious Jews, one Muslim, at least one confirmed Atheist and a sprinkling of spiritually connected but non-religious folks like me. We came to the journey from different entry points; some were already immersed in activism supporting human rights and equality for all through the BDS (Boycott, Divest, Sanction) movement and other avenues, while others who were neutral on the issue simply wanted to learn more. Some were looking to explore another side and question their Zionist beliefs which they were raised with in church, politics and home.

Though the conflict between the state of Israel and the displaced Palestinian people is often characterized as a religious one, I found that religion was only one aspect of an incredibly complex and multifaceted issue. The basic premise of Israel — that the Jewish people need a state of their own in order to protect themselves from the possibility of another Holocaust — was first linked to religion when early Zionists (pre-WWII) chose this region to “settle” based on religious text and geographical references in the Old Testament. While the region is a historic homeland for many Jews, the same is true for the Arabs living there, known as Palestinians. Religious imagery is also invoked on the flag, which appears around every corner in Israel and the more ‘Judaized’ areas of the West Bank.

Judaization is the process by which the bantustans and rural areas of the West Bank are slowly and illegally annexed by the state of Israel. Jewish people from anywhere in the world are encouraged to help in the project by moving into these illegal, but very comfortable settlements. Their housing is subsidized by the state and many incentives are offered for becoming a settler, so the program attracts young families, immigrants and people struggling economically. In general, this program has been effective in engineering a Jewish majority in more and more communities in order to ensure the success of a “democratic” Jewish-only state.

My group met Jonathan Cook in Nazareth, one place where the settlement and Judaization campaign is visually apparent and overtly carried out by the local government. He took us on a walking tour of Nazareth Illit, the separate municipality set up on the hills above Nazareth and explained the goals of settlements in general: containment and isolation, redistribution of resources, and surveillance. Like almost all settlement communities, Nazareth Illit is built upon the hilltops surrounding the city of Nazareth. This has a strategic and psychological effect on those living below; the state and its racist agenda have the literal high ground and a physical, daily reminder to those underneath about where they stand. Cook summed up the inherent racism in Israel’s model, saying, “Israel is a democratic state for Jews, and a Jewish state for everyone else.”

The reason that Nazareth is currently being heavily targeted with this Judaization campaign is twofold. First, Nazareth is seen as a political threat by establishment Israel due to its large majority of Arab citizens and unusually large Palestinian middle class. Second, Christian tourism in Jesus’ childhood backyard, rife with holy sites, is a huge economic factor for the city and fuel for the aforementioned middle class. The state does not want to miss out on an opportunity to capitalize upon this industry, especially if it can simultaneously work to engineer a Jewish majority in such an important strategic location.

The darker side of Zionist expansion into the West Bank (the action which makes a “two-state solution” geographically impossible) can be seen in Hebron, a city south of Jerusalem with a population of about 200,000 Arab Palestinians and 800 Jews. As with any specific area of this region, observers and students can trace the ownership and control back for many generations and can argue endlessly over what a friend calls, “Who did what to whom first,” but this dance around does little to further understanding of what happens today and even less to promote reconciliation and peace. The challenge presented is a complex one: to understand history’s broad sweep without becoming entangled in the endless debate above and to suss out the truth among competing narratives. Narratives that I saw can be internally consistent and factually wrong at the same time.

The internally consistent narrative is an important concept to grasp if one wants to understand, as we all did on my delegation, how such horrific acts as child arrests, torture and land desecration can be justified through religion. The best example of a group employing and projecting their own narrative can be found in Hebron’s Jewish community. We met with their official spokesman, David Wilder, a New Jersey-born immigrant who arrived in Israel in 1974. He, as many of his fellow settlers in Hebron do, carries a loaded Glock on his hip and in his introduction to our group casually mentioned, “…that if you really disagree with me, that’s why I carry a gun.”

Taylor Weech is a local journalist and organizer. She produces a weekly radio show called Praxis on KYRS. Read more about her trip with Interfaith Peace-Builders on her blog.