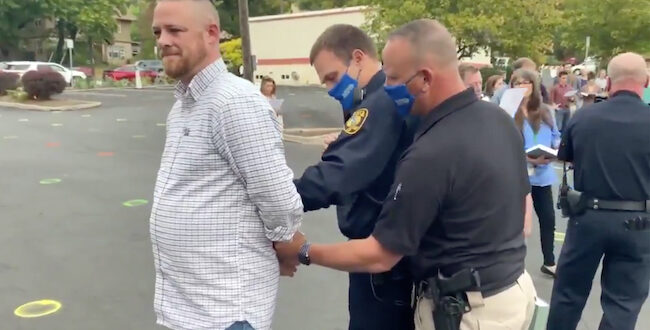 President Donald Trump tweeted out a warning to his followers Wednesday (Oct. 7), claiming religious liberty in the U.S. was in danger.

“DEMS WANT TO SHUT YOUR CHURCHES DOWN, PERMANENTLY,” he tweeted  in all caps. “HOPE YOU SEE WHAT IS HAPPENING. VOTE NOW!”

For proof, the president retweeted a video of an unmasked local politician in Moscow, Idaho, being arrested in late September while a group of people around him sing a hymn.

The video had originally been posted to Twitter by Cliff Maloney, who heads a group called Young Americans for Liberty, according to his profile.

“This is one of the most heartbreaking things I’ve ever seen. Pray for America,” he wrote.

A clip from arrest at the psalm sing is also used in a video from California megachurch pastor John MacArthur as an example of what he calls “leftists and secular government officials” using “COVID as an excuse to shut us done.”While a pastor in Florida was arrested in March for holding indoor services despite a coronavirus ban – the charges were later dropped — there’s no sign authorities are arresting church members for holding services.

In the Idaho case, Gabriel Rench, a candidate for Latah County Commission, was arrested at a “psalm sing” promoted by Christ Church, a local congregation run by controversial pastor Doug Wilson, according to the Moscow-Pullman Daily News.

In the video, someone offscreen can be heard following the officers as they escort a handcuffed Rench. “Didn’t see this happening to BLM, Gabe,” the person offscreen said.

“You guys should not be doing this, and doing this kind of crap for the mayor,” Rench can be heard telling his arresting officers, who both had on masks. “This is embarrassing. You guys are stronger than this. You’re tough people. You’re a cop.”

While promoted by the church, the event was not a Sunday worship service.
In addition to Rench, two others were arrested during the event. Five people were cited for allegedly violating the city’s mask and social distancing order at the event, held outside Moscow City Hall.

According to the Daily News, the church usually holds an outdoor singing event at a local park but moved it to City Hall in September.

“We wanted to make a statement we’re ready to head back to normal,” Ben Zornes, a Christ Church pastor who organized the event, told the Daily News.

According to The Associated Press, Wilson warned the about 150 people who gathered for the event that they could be arrested for not wearing masks. Most folks who attended the event stayed for about 30 minutes, the AP reported.

The church held another event on Wednesday at Friendship Park in Moscow. About 200 people attended and there were no arrests, though neighbors from nearby apartments blared a raunchy Cardi B music from windows overhead.

More Pslam sings are expected to be held by the church in downtown Moscow.

City officials advise city residents to stay away from them.

“Given the significant increase in daily confirmed COVID-19 cases in the area, concerns for public and officer safety, and the desire to prevent increased opportunities for community spread, it is strongly recommended that the public stay clear of the area until the end of the advertised gathering,” the city said in a press release.

Wilson is known for his take-no-quarters approach to public discourse. In 2018, he launched a series of blog posts about controversial topics with a video showing him sitting on a couch, smoking a cigar while the couch burns.

Wilson has long claimed his church plans a “spiritual takeover of Moscow,” a progressive blue enclave within a red state. The church’s website claims it wants to make Moscow a “Christian town.”

“Basically this is a blue dot in a very, very red state and the blue dotters are pleased,” Wilson told Religion News Service in an interview in 2019. “Our mission is ‘All of Christ for all of life’ and if you drill that down, then for all of Moscow.”

This story has been updated by SpokaneFāVS.

Previous Ask An Eastern Orthodox Christian: What is Your Church?
Next Don’t Let the Fight to Replace Justice Ginsburg Begin – Part II