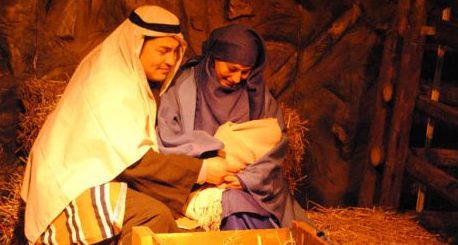 Journey to Bethlehem is always held the first weekend of December at the South Hill Seventh-day Adventist Church at 57th Avenue and Freya Street. Though the annual free performances are hosted by the church, the over 100 actors that participate come from eight different denominations.

“It’s put on as a gift to the community by the Spokane Seventh-day Adventist Church,” said event volunteer Darin Patzer. “It is something that the church pays for as outreach.”

The performances started about 15 years ago, said Patzer. It and its sister Easter performance, Journey to the Cross, were created by the Rev. Davie Livermore before he came to Spokane. He and his wife wrote the script that is still in use today.

“It’s actually a walk-through experience,” Patzer said. “It’s different than the plays you would see at Christmas or Easter time.”

The performance has expanded over the years, he said.

Though the performance spans only one weekend, work on the production starts during the summer. Actors are assigned their parts and animals are located that can be used during the production. There are usually goats, donkeys, sheep and other animals, but Patzer said there has been difficulty finding a camel this year.

Many of the actors return year after year, though they sometimes fill different roles.

“I’ve been everything from the tour guide to the MC,” Patzer said. “This year I’m the self-righteous Pharisee.”

Patzer said that between 1,000 and 2,000 people usually visit each night. People will have to wait outside in line before being let into the church sanctuary for a musical performance. From there people are released in groups every few minutes for the 20 to 25 minute walking tour of Bethlehem on the night of Jesus’ birth. It’s important to dress warmly for the experience, Patzer said.

As people make their way through the village, complete with Roman guards, they’ll end up at a manger marked by a star suspended 80 feet in the air by a crane. Refreshments will be available after the tour.

Parking is available at the Seventh-day Adventist Church at 57th and Freya. Overflow parking will be available across Freya at the Followers Church.