Share this story!
After causing a bit of turbulence with some passengers, Alaska Airlines will no longer serve prayer cards with in-flight meals, the company announced Wednesday (Jan. 25). 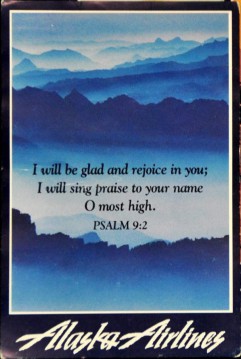 The cards, which take a line or two from the Book of Psalms, have been an Alaska Airlines trademark for 30 years, uplifting some flyers but annoying others.
“This difficult decision was not made lightly,” wrote Alaska Air Group Chairman and CEO Bill Ayer and Alaska Airlines President Brad Tilden, in a letter to frequent flyers.
While some passengers appreciated the prayers, “we've heard from many of you who believe religion is inappropriate on an airplane, and some are offended when we hand out the cards.”
“Religious beliefs are deeply personal and sharing them with others is an individual choice,” the letter continued.
Actually, relatively few customers of Seattle-based Alaska Airlines — the nation's seventh largest carrier in terms of passenger traffic — have received the cards since 2006, when the airline stopped serving meals in coach.
First-class passengers continued to find them on their meal trays, but only on flights longer than four hours that featured food service.
The airline, which carries more than 16.5 million passengers annually, will stop handing out the cards on Feb. 1.
Harriet Baskas, a veteran travel writer based in Seattle, wrote about the change on her website and said she has rarely seen a story get as much attention.
In a non-scientific poll on her website, nearly 20,000 people responded to her online question: “Would you be offended by a prayer card?” About 80 percent said they would not, and 20 percent said they would.
The results surprised Baskas. People she has talked to about the cards found the practice odd, whether they are religious or not, Baskas said.
“It seems to be mixing one world with another,” she said.
The prayers, printed over a dreamy depiction of a mountain range or sunset, were all taken from the Psalms, which is read by both Christians and Jews. One Alaska Airlines favorite came from Psalm 107:1: “Give thanks to the Lord for He is good; His love endures forever.”
Some customers, according to the airline, have assumed that the prayer cards were the idea of former CEO Bruce Kennedy, a devout Presbyterian and elder in his church.
The letter to frequent fliers explains that it came from a marketing executive who thought the cards would be a good way to set Alaska Airlines apart.
With the Alaska Airlines decision, no major U.S. carrier provides prayer cards.

Previous Buddhist convention coming to Spokane
Next What Catholic Council decided that Jesus had to discover He was God by reading Scriptures?