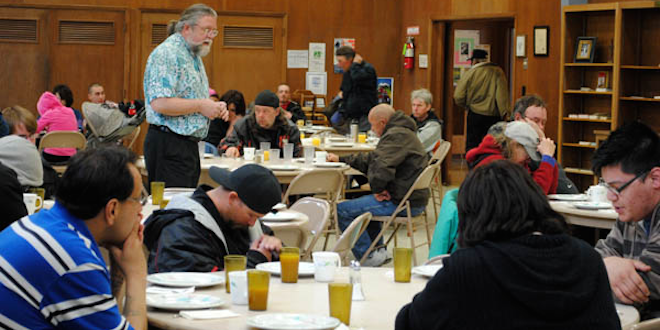 Advocate for people, even when they’re unpredictable

The dinners at All Saints Lutheran in Browne’s addition, are nothing if not lively. We are in our 10th year of serving a meal at 5 p.m. every Tuesday to the homeless and poor and other community members. The guests vary from the hardest hit homeless addicts with mental illness, to the very poor, to the sort of poor, to the not very poor — but just want to not eat alone. Our worship services over the years have garnered some of these folks for Sunday worship as well. People come and go and stay and leave without any real predictability. I suppose it’s this unpredictability that leads to some fear and concern about safety.

David came to the meal one Tuesday night in pretty good spirits, he was an Iraq war veteran of several tours, Special Forces, 6 foot 5 inches tall and about 240 pounds. An impressive physical presence to say the least. David had been discharged because of mental illness, and was being treated for PTSD. All was currently going well, he was going to his appointments, taking his medications and was starting classes at the community colleges. I welcomed him to dinner and formed a friendship bond and we got along very well. He was usually at the dinner and always had something good to say to me on the way in or out. I noticed him missing one week and then another and without contact information to find out, I just assumed he had moved on and no longer needed the services we offered, it happened all the time with our guests. About three months after he went missing David showed up for dinner again, we greeted each other and he sat down for the meal. It was a busy night and after the other guests had mostly left I noticed David was nowhere to be seen. I was disappointed; as I had wanted to have a chat about his absence and catch up a little. I locked up the building and was making my usual checks before leaving and as I looked in on the sanctuary I saw a lone figure sitting in a pew in the dark, it turned out to be David. I thought great, he had come in to pray and now I would have a chance to catch up with him. As I approached he sat in silence. I walked up to stand in front of where was seated; that’s when I noticed he had his service knife in his hand and was holding it very tightly. I asked what was going on and he exploded with a litany of injustices perpetrated on him by other people and the system and the VA and so on. It was at this moment that I realized I was alone in a dark sanctuary with a potentially very dangerous and well trained man who was in a decompensated mental state, holding a military knife specifically designed to kill people.

My mind raced as did my heart as I tried to think of what to do. The strangest thought came to my mind: Who was the most vulnerable person in this situation? At first I thought ME ME ME! I could die here! I would have no chance to defend myself against a large, strong, armed and well trained soldier. My frantic mind “heard” something else … “you are not the one in danger” and I immediately realized that in fact, it was David who was most vulnerable here. I was in my right mind, I had agency to act in a way to help him … and so I very slowly, asked him if I could sit next to him, he moved over and I sat right next to him and we both sat in silence and observed the dimly lit cross. We both reflected on what the cross meant to us, what we saw and how we felt about it, after nearly an hour of some talking, but mostly silence, I asked if I could help in any way. He produced a slip of paper with a phone number which I called and talked to a counselor of his, who came and picked David up. The counselor thanked me for not calling the police, as he had had that experience and it didn’t end well.

What I did that night in the holy space we call “sanctuary” was nothing heroic or smart or anything else … it was doing what Jesus called us to do … “Love your neighbor.” I looked within myself and realized who the truly vulnerable one was and I responded by making myself vulnerable as well. I took the authority I had to sit with a fellow human being in mostly silence, but then listened when he told of the horrors that plagued his mind.

Now, I am tempted to “go off” on the militarized industrial complex that brought on the war that led to this nice man winding up in this predicament, but that is water under the bridge, as they say … However, I do believe that we are as a nation culpable in the worst possible way for all the things that have happened to our men and women in the military as well as the civilians that have been hurt, but that is another story.

As for me and our congregation, we have decided to exercise our authority to engage and be prepared to come alongside anyone who comes in our midst that is suffering and vulnerable. I recently heard a lecture by Walter Brueggemann, where he said; and I paraphrase, “the dominant and powerful in society have set up a predatory economic system that, among other things, leads to war and strife and damages the most vulnerable all over the world.” David is a victim of that system and so are countless others, our role as good people should be to come alongside these folks in love and care and to advocate for justice on their behalf.

Join SpokaneFAVS for a Coffee Talk forum on “Safety in Worship” at 10 a.m. Aug. 1 at Indaba Coffee/The Book Parlor, 1425 W. Broadway. Eschenbacher is a panelist.