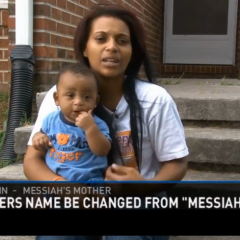 NASHVILLE, Tenn. (RNS) A Tennessee judge should not have barred a couple from naming their child “Messiah,” said the executive director of the American Civil Liberties Union of Tennessee.

On Thursday (Aug. 8), the parents of the child appeared in Cocke County Chancery Court in Tennessee because they could not agree on a last name.

“The word Messiah is a title and it’s a title that has only been earned by one person and that one person is Jesus Christ,” Ballew told the 7-month-old’s parents.

Hedy Weinberg of the ACLU’s Tennessee office said Ballew is free to hold religious beliefs, but that faith should remain private.

“She does not have the right to impose that faith on others,” said Weinberg. “And that is what she did.”

Martin is appealing the judge’s order. Weinberg said ACLU staff is reaching out to the boy’s mother to offer assistance.

“A parent has the right to choose their child’s name,” she said. “In this case, the judge is creating a culture where she is imposing her religious beliefs on others. And that is unacceptable.”

“Messiah” currently ranks 387th among baby names for boys and girls, according to Nameberry.com, a blog about baby names. “Jesus” is number 101, while “Christopher” — which means “bearer of Christ” — is number 23.

According to the Social Security Administration’s database of popular baby names, the name Messiah has grown in popularity since 2005 when it was ranked 904th. It was 387th in 2012.

Ballew said it was the first time she has ordered a first name change. She said the decision is best for the child, especially while growing up in a county with a large Christian population.

Nick Harrison, co-author of “The Best-Ever Christian Baby Name Book,” said that there aren’t many other names that specifically refer to Jesus Christ.

Harrison said he sympathized with Ballew. Parents have to be careful when they give their children an unusual name, he said, because it can lead to bullying.

“I can sympathize with the judge but I don’t understand the legal precedent,” he said.

Harrison said names can help a child shape their identity. Knowing the meaning of a name gives a child something to aspire to, he said.

“Messiah” might be going too far, Harrison said. “That’s a lot to live up to.”