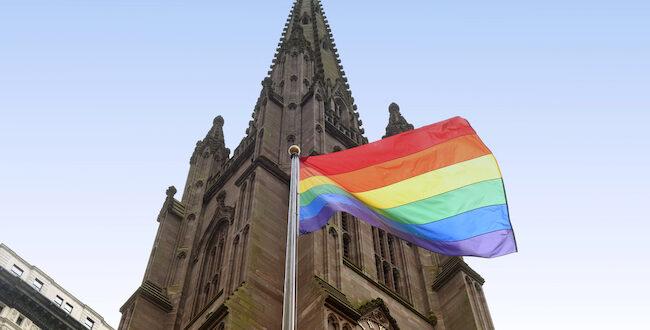 A rainbow flag in front of a church/DepositPhoto

Acceptance of Community in Christianity

Acceptance of Community in Christianity

One of the biblical “prooftexts” most commonly used against queer people is Romans 1:26. There, Paul characterizes homoerotic relations as “against nature” (Greek: para phusin).

Paul uses this phrase once again, elsewhere in Romans. In a striking horticultural metaphor, he likens Gentile (non-Jewish) Christians to branches of a wild olive tree, grafted “against nature” into the cultivated olive tree of God’s people, Israel (Romans 11:24).

The earliest church was a messianic Jewish sect, into which non-Jews were (according to Paul’s metaphor) “grafted against nature,” by divine grace. In Paul’s terms, today’s church, which is overwhelmingly non-Jewish, owes its very existence to that gracious but “unnatural” divine graft.

Many Christians (including myself) hold that this has profound implications for the church’s relationship with LGBTQ+ folk. If God graciously acted “against nature” to welcome us, just as we are (i.e., as Gentiles), then who are we to argue that God cannot welcome them, just as they are?

It makes sense that Paul would have condemned the homosexual behavior that he witnessed in the Gentile world around him. There was in his time no concept of intrinsic sexual orientation. What Paul saw was an overwhelmingly exploitative, pederastic model of behavior, in which ostensibly heterosexual men routinely betrayed their wives in sexual liaisons with boys, and with male slaves and prostitutes.

But does that model really correspond to the realities we know and experience?  What if (as many Christians believe) the current understanding of intrinsic sexual orientation, expressed in nonexploitative, voluntary, committed relationships between adults, is to be taken seriously? If it is, then Paul’s core theology suggests some clear implications.

Paul strenuously opposed those among his fellow apostles who held that God’s welcoming in of Gentiles was contingent upon their first converting to Judaism. In his worldview, both Gentiles and Jews were such, “by nature.” For Gentiles to pretend otherwise, imagining that to be saved they must first present themselves as Jews (which “by nature” they were not) was, in Paul’s view, more than just a lie. It was to make a mockery of God’s grace in Christ, which had already welcomed them in, as Gentiles.

By this Pauline logic, to require that queer Christians undergo so-called “conversion therapy,” rejecting what they are by nature, and presenting (falsely) as cisgender heterosexuals, would likewise be to reject God’s grace, which welcomes us all — as who we really are.

I understand and respect that not all Christians will take this logic on board, and I do not expect that. What I do humbly ask of my fellow Christians is that they respect and honor this for what it is — not a mere accommodation to currently fashionable liberal norms, but a responsibly held, biblically grounded evangelical perspective.

There is a significant difference between Paul’s two uses of the phrase “against nature.” In Romans 1, he employs it conventionally. Both Jewish scribes and Gentile philosophers used it this way, to critique pederastic sexual practice. That’s standard contemporary rhetorical boilerplate; it’s not Paul’s gospel. His proclamation of the Gospel is, however, found in his second use of the term, in Romans 11.  The “good news,” according to Paul, is this: divine grace is willing to contravene even (whatever we may understand to be) the laws of nature, in order to welcome us all: the Gentile, the stranger, the outcast and — yes — the gender-nonconforming.

This point is beautifully illustrated in the story of Philip and the Ethiopian eunuch (Acts 8). Here was a man who embodied in his person both categories of normative impurity: ethnic and sexual. He says to Philip, “Here is water; what is to prevent me from being baptized?” Philip might easily have answered “Plenty,” citing scriptural prooftexts (e.g. Deut. 23:1–6). Instead, he simply baptizes him. Philip understood the good news, already proclaimed in the Hebrew Bible: God is willing and eager to override ancient norms (even ones apparently enshrined in scripture), to welcome in both the ethnically and the sexually “impure” (Isaiah 56). That Christians today should do likewise, following Philip’s example, is not just acquiescing to current ideological norms. At least for many of us, it’s simply a matter of proclaiming and faithfully embodying that original good news.

Previous The View from the Porch – Fall Edition
Next Spokane Pride to host drive-thru festival, parade with affirming resources