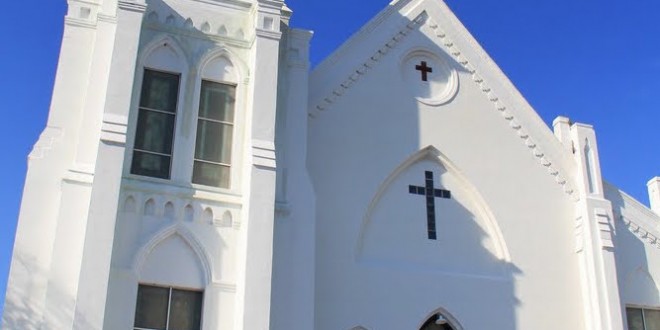 A Violent Act in the Name of White Supremacy: The Charleston Shooting

“We pray that our time here spent today will be seen as an act of love as well as an act of righteous indignation in the face of injustices.” – South Carolina State Senator and Senior Pastor of Mother Emanuel A.M.E. Church Clementa C. Pinckney, speaking at Emanuel African Methodist Episcopal Church during Civil Rights Ride 2013

“You rape our women and you’re taking over our country. And you have to go.” Dylann Roof reportedly to members of Mother Emanuel AME Church, June 17

The Birmingham campaign earlier that year was a watershed moment for the civil rights movement. Photographs of Bull Connor’s men turning fire hoses on non-violent protestors forced the nation to pause and consider segregation. The Rev. Dr. Martin Luther King, Jr. was arrested and wrote his famous Letter from Birmingham Jail in April of 1963. Throughout the Birmingham campaign, 16th Street Baptist Church was an organizing hub. Peaceful demonstrations were planned there. Some marches began at its doors. This made it a target. When it was bombed that fall, the reason was clear. It was bombed because it was a center of the black freedom struggle.

Emanuel Church was not the first black church in the South, but it was the first AME church south of Baltimore. Founded in 1787 in Philadelphia by Richard Allen, the African Methodist Episcopal Church, a black denomination, formed in protest against racial discrimination in St. George’s Methodist Church, where many black Methodists in Philadelphia worshipped. For similar reasons, black Methodists in Charleston formed their own church in 1818 and quickly affiliated Emanuel with Bishop Allen’s AME Church. From the beginning, whites in Charleston were suspicious of Emanuel AME Church. Like many other black churches in the 19th century and early 20th century, Emanuel was more than a place of worship. The church was a community center, and it was a school, dangerously teaching reading and writing to free blacks and slaves. For this reason white Charleston officials temporarily closed the church shortly after it opened. Leaders were arrested, fined, and whipped. But it would be in 1822 that the city would burn the church down.

One founding member of Emanuel was free black and former slave Denmark Vesey. A carpenter in his mid-50s, Vesey was respected among Charleston’s African American population. He was one of the teachers in the Emanuel school. He also had a plan. According to white Charleston leaders, Vesey and others were going to rebel on Bastille Day 1822. Supposedly, free blacks and slaves throughout the Charleston area would rise up, raid the local arsenal, kill white leaders and slave owners, and free all nearby slaves. If successful, the rebellion could have altered American history. But it wasn’t. Rumors of the planned revolt spread across Charleston, likely the result of nervous slaves. The date was moved up to from July 14 to June 16. The rebellion would begin at midnight, which meant June 17 was the real first day of the rebellion. June 17.

But it didn’t happen on either July 14 or June 17. Vesey and his co-conspirators were found out by white Charleston officials. They were tried and found guilty. The courts sentenced Vesey and 34 others to hanging. Another 35 slaves and free blacks, including Vesey’s son Sandy, were re-enslaved and deported in chains to Spanish Cuba. Emanuel AME Church was shut down and burned down. In 1834, the law forced all black churches in Charleston to practice their religion either underground or under the supervision of whites. Black churches like Emanuel wouldn’t rebuild and reopen until the end of the Civil War.

The targeting of Emanuel AME Church was not random, nor was the date of the shooting. It was calculated. It was brutal. It was white supremacy. Considering Roof’s target, his choice of date, and his reported words about African Americans “taking over our country,” identifying this as a hate crime is easy. A violent act in the name of white supremacy. What’s difficult is finding a way forward.

Emily Suzanne Clark, Ph.D., is associate professor of Religious Studies at Gonzaga University, where she teaches and researches American Religions. She is the author of the multi-award-winning book, A Luminous Brotherhood: Afro-Creole Spiritualism in Nineteenth-Century New Orleans and co-editor of Race and New Religious Movements in the USA: A Documentary Reader.

When not teaching, reading, or researching, she can be found hiking and running about the area and playing soccer in the local Spokane adult leagues.