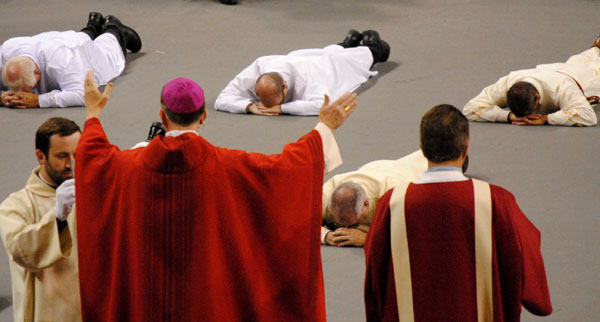 Deacons being ordained in the Catholic Diocese of Spokane, 2013.

A turning point for my friend – and me

I attended the ordination of a Catholic deacon last Saturday. (Yes, they’re ordained, just like priests.) But, unlike permanent deacons, my friend Jim won’t be a deacon for long. He is what’s known in church parlance as a “transitional” deacon because, in 2018, he will be ordained a priest.

I was deeply moved by this rite – not because of the pomp but because I was watching a good friend, someone I’ve broken bread with many times, give his life to God.

In the days when the two of us ate breakfast roughly once a month at the Holiday Diner after a men’s Scripture study meeting at our church, Jim worked as an intensely busy expert in IT infrastructure for a multinational company. (Many of his former coworkers were among those who attended his ordination.)

Maybe that memory is why I was near tears as I watched Jim lying face down on the marble floor. Maybe that’s when I realized in a new depth what it means to give up everything for the sake of serving God.

And when I say everything I mean it. If it wouldn’t fit in his cubicle of a seminary dorm room, he’d said, and he couldn’t afford to store it, then he had to get rid of it. And so, three years ago, I helped him sell his motorcycle, and I was the one who figured out how to cram all that remained of his belongings into the back of his SUV before he headed for seminary. But he doesn’t regret having less.  In fact, that’s the way he wants it.

The event had a visible impact on Jim, too, in part because he was the object of all the attention. Unlike past years, there were no other deacons being ordained that day. And next year he’ll be the only one in our diocese who is ordained a priest. That speaks volumes about the shortage of diocesan priests.

After promising to remain celibate, serve God and his people and remain loyal to whoever is the bishop, the words of ordination were spoken by the bishop.

Then the bishop gave my friend Jim some advice on how to be a good deacon – and, within a year, a good priest. Jim was advised to focus on Scripture. “Believe what you read. Teach what you believe. Live what you teach,” Jim was told. Everyone in church could hear those words. And that was on purpose.

For a few minutes after the words ended, Jim sat next to the bishop. Anyone looking at Jim could see he had all he could do to suppress the tears. I could only surmise that this was because he had finally reached an irrevocable turning point in his life. There was no turning back. He knew it. And was thrilled.

When I congratulated Jim after the Mass and before the reception I asked if he was still available to grab breakfast or lunch. Absolutely, he said. So we will get together in a couple of weeks. But I suspect that our shared breakfasts from now on will have a different feel to them because our relationship has now turned a corner, too.

Being free of possessions is just one example of the different paths that he and I now walk. And yet, thanks to witnessing this rite, I sense that I have turned a corner, too. I now feel the urge to re-examine my life, to see where my possessions of any kind – physical or intellectual – are more important than my beliefs.

And this coming Saturday I will go through the same experience at an even deeper level when I attend the ordination of five men, one of whom I know, who have served as transitional deacons for a year and will then become priests.

From now on Jim will be going places, spiritually and physically, that are foreign to me. We are now traveling different roads, which will mean fewer chances to bond over breakfast but more opportunities to bond in our faith walk.

And even though we may go our separate ways, that’s okay because we both believe that every road of the Christian faith eventually leads to the same place in the end.

Previous When is a leak ethical?
Next No major US religious groups approve refusing service to gays