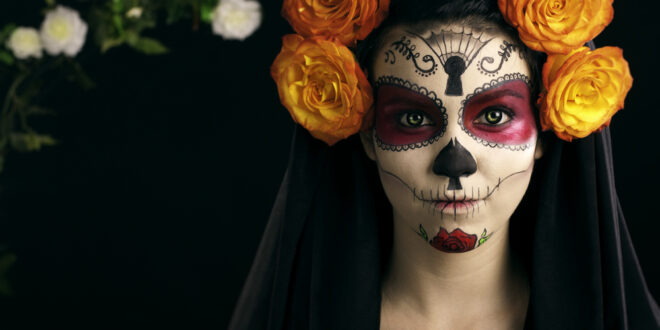 A trifecta of holidays nears, reminds us of our losses

A trifecta of holidays nears, reminds us of our losses

We are blessed with a trifecta of upcoming, intertwined holidays: Halloween (Oct. 31); All Saints’ Day (Nov. 1); and Dia de Muertos, the Day of the Dead (Nov. 1-2). When betting on racing horses, we must choose three in a row to win a trifecta. Here the betting is easy. All three holidays win our affection since all three are about loss.

A deep root of Halloween is the ancient Gaelic holiday of Samhain, which commemorated the death of nature that comes at the end of harvest and the onset of winter.

During this liminal time, spirits roamed the earth. Under Christianity, these spirits became the hallowed ones, the holy ones, who had died. Halloween, a condensation of All Hallows’ Eve, is really the first of our three Days of the Dead, and, like most of our holidays, is syncretic.

Some current Halloween customs reflect its harvest festival roots: we delight in apples as we bob for them in bowls of water and in pumpkins as we carve and display them. The carving of pumpkins in America can be traced to the carving of turnips in Ireland.

Irish and Scottish immigrants brought to us many of our Halloween traditions. In Ireland, candles glowed within carved pumpkins to light the way home and ward off evil spirits. Now, the poor pumpkins are often given such tortured faces that they seem demons themselves.

“Guising” — roaming around in disguise — is another old world custom we carry on. Once folk may have disguised themselves to shield their identity from evil spirits who were also roaming around.

I used to think that trying out alternative identities with funny or scary costumes and masks was mainly for kids, but now it seems that adults want in on the action. Perhaps we want to relive our lost childhood.

Trick or treating is one ancient custom that is still the preserve of roaming kids. In my youth this always occurred at twilight, the shadowy liminal time at the end of the day when it was liberating and a bit scary to be out in the streets.

Now, many parents fear to send their kids out in the dark and take them instead to well-lit malls or to downtowns in broad daylight to gather treats. This is unfortunate, robbing kids of a real Halloween experience.

Some Christians want no part of a real Halloween, seeing it as a devilish holiday. They might see it, instead, as the evening entry into All Saints’ Day.

Catholics commemorate all those who are venerated as saints by the church. Since Luther was suspicious of this veneration and since he held that we were all simultaneously saints and sinners, those in his camp commemorate on All Saints’ Day all faithful folk who have passed on.

In the Lutheran church I attend, the names of members who have died during the last year are read, and we light candles around the altar to celebrate a dear one we especially wish to remember.

This beautiful custom brings All Saints’ Day into the good company of Dia de Muertos, or the Day of the Dead.

I must admit that I never heard of this holiday until I moved to Idaho and taught some Chicano students with roots in Mexico, its country of origin. Like Halloween, the Day of the Dead is syncretic, blending Aztec and Christian traditions.

A large part of this festival is honoring relatives who have passed with elaborate family altars decorated with marigolds, which according to tradition attract the dead back from their tombs to their family homes so they can be surrounded with love and stories. Families also visit the tombs of their ancestors to eat, joke and cry in their presence there.

My Chicano students helped me honor my father who passed while I was in Idaho, showing me how to decorate a paper skull with marigolds, which happened to be my father’s favorite flower. I put a paper pipe in his mouth so he could smoke as I remember him.

That sweet 2017 movie “Coco,” with its moving song, “Remember Me,” has helped bring the Day of the Dead up from the Mexican border into the hearts of us who live in the Northwest.

We can learn from this completion to our holiday trifecta how important it is to be open to the cultural syncretism immigrants have brought us and to the way our lives are deepened by remembering those we have lost.