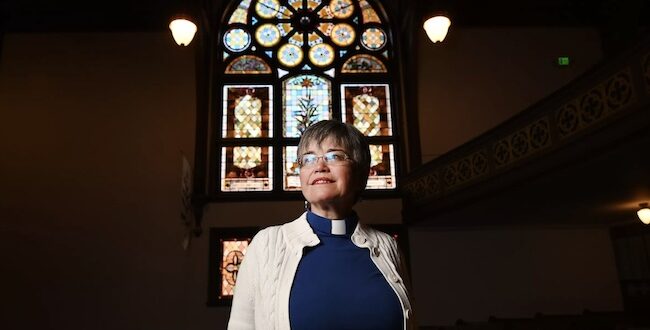 The Rev. Andy CastroLang is the pastor of the Westminster United Church of Christ, also called by its historical name, Westminster Congregational. She plans to retire in August. (Jesse Tinsley/THE SPOKESMAN-REVI)

A tribute to my source, and friend, Pastor Andy CastroLang, who will retire this year

A tribute to my source, and friend, Pastor Andy CastroLang, who will retire this year

As a journalist, you’re not supposed to be friends with your sources.

But when I met the Rev. Andy CastroLang, it just happened.

We met for coffee at Rockwood Bakery and now, 10 years later, we share what seems like a lifetime of memories.

In August, she’ll be retiring as pastor of Westminster Congregational United Church of Christ, where she’s served for 20 years. I’m too close to her to write a news story, but I can dedicate this column to my friend.

In 2002 she moved to Spokane from Nebraska with her husband, the Rev. Jim CastroLang, and their two kids – then ages 15 and 13.

Karen Mobley, a deacon at Westminster, was on the search committee when the congregation hired Pastor Andy.

“There was a strong sense of her determination, evidenced by her journey to become a pastor, and her compassion, demonstrated by her concern for others who had left behind church because of their sexual orientation,” Mobley recalled.

Clearly it was the right decision for the CastroLangs, and for the church.

Under Pastor Andy’s guidance, Westminster voted to become open and affirming, agreed to stay at its downtown location and, in 2004, celebrated 125 years – making it Spokane’s longest-serving church.

I’ve been inside the gray-stone downtown church countless times because of Pastor Andy, and it’s always been clear her congregation adores her.

“She’s authentic,” he said. “Having worked with her a long time, I’m certain she’s authentic in everyone she deals with. … There’s such a personal honesty that is her, and I value that in her.”

I can vouch for that. I wish I could be more like Pastor Andy. It takes such courage and care to be so thoughtful and veracious the way she is. And she does it in a way that’s both gentle and effective.

In 10 years, I haven’t given a sermon without running it by her, or made a major life decision without sitting around a fire with her (and her hubby!) to talk it out over a glass of wine.

Her love of science helps too.

Windham says Pastor Andy’s rational, analytical brain has helped her “deal with the issues of our time” whether it’s homelessness, race or gender.

Some of my favorite Andy memories are of staying up late – usually around that fire pit again – looking up at the stars and trying to identify constellations.

Pastor Andy’s “big welcome” is what drew me to her at the coffee shop, and I know it’s what’s drawn people to Westminster.

Mobley said that warm attitude changed how the congregation does things.

“People are lighter and friendlier,” she said. “Andy has helped us to lead in the community around issues of race, sexual orientation and social justice.”

The Rev. Mike Denton, conference minister of the Pacific Northwest Conference of the United Church of Christ, said Pastor Andy is an example to other clergy.

“Rev. CastroLang’s tenure as pastor at Westminster models one of the best ways to be in ministry. Serve, always, and lead when necessary,” he said. “During her time, her service and leadership have helped Westminster move from being a church in the city of Spokane to a church that’s truly part of it. Even though her ministry is coming to an end, this co-created legacy will continue.”

The congregation has called a new pastor, the Rev. Bob Feeny, and judging by the testimonials written about him from the search committee, he’ll do Pastor Andy – and Westminster – proud.

I’m excited for my friend to spend time this fall doing what she loves most. Those two kids she moved here with 20 years ago are adults now, with their own kids. Pastor Andy’s new calling is being a grandma.

Soon enough, she’ll be sitting around the fire with them, looking up at the stars, talking about the wonders of life. Lucky for me, I’ll be there too, still soaking up every word.

Visit My Website
View All Posts
Previous Hope for Creation Conference Coming to Spokane April 22-23
Next When We Seek Common Ground Who Loses?