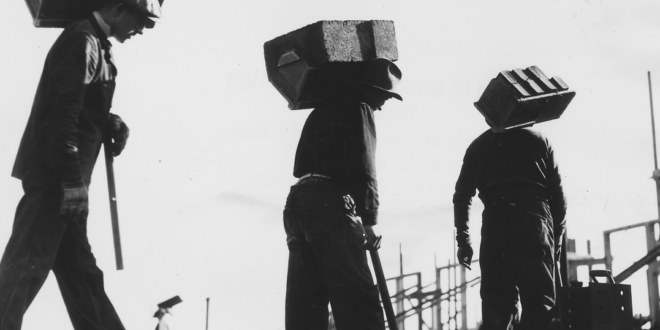 Mad Dogs. I’ve known a few. I am sure we have all known at least one.

Matt “Mad Dog” Henderson. A hod carrier by trade. If you have ever known any career hod carriers, you know they are a different breed of human being altogether, from drunk uncles to hot-tar roofers.

Hot-tar roofing requires a totally aberrant type of person to fill the job, someone who can spend a lifetime huffing steaming oiled asphalt juice in the hot summer sun and it not be an apparent distortion to their state of mind.

With these guys, it is best not to be on their bad side, especially if you have to be around them for any period of time.

No one liked to work with Matt. He did what he wanted, and part of that was to try and piss you off.

I tried to keep a low profile working with Matt

I was completing my brick apprenticeship at the time. He learned early on I was the quiet type, mostly someone who kept to myself and would shrug off his vulgarity with a smile. I learned my best defense was not to become a target. I found humor, humility, hard work and keeping my mouth shut to be effective.

In masonry, we travel a lot. Leaving town for a week on the job often requires leaving at 3 or 4 a.m. on a Monday morning to start at 7 a.m. on a job hundreds of miles away. It was painful waking up that early, especially after indulging in the hard party life I lived during the weekend in those days.

This weekly ritual actually proved to be an invigorating start to the morning that brought rare serene scenes as we were often the only ones on the road for hours. Awake and rolling at a time the surrounding world was asleep. Winding between the wheat fields of the Palouse under expansive starlit skies. Speeding down the freeway with nothing in front of us but open road, heading into the new day yet to dawn.

It was this scenario one clear morning as Matt drove west that I saw, due north out my window, a brilliant light. I imagined a faraway large city just beyond the horizon. I tried to think of what possible source a light that bright could come from. I asked Matt. He refused to even turn his head and shrugged it off as if I was seeing things.

As we continued our journey down the highway, I studied the skyline towards the light, fixated. The glow started to dissipate, and I noticed in the distance extraordinary, moving, electrical waves of green, red, yellow and blue start to come alive, as if a stormy ocean was being painted on a careening canvas in the sky.

The shining tide quickly washed into the atmosphere as more brushstrokes of amazing strength would flow. Distant at first, the waves grew more intense, greater, brighter, and were far and wide, reaching closer, coming directly above us. Radiant.

A sea of colors vibrating and raging before a dark, star sprinkled sky. It was the Aurora Borealis, and its magnificence was on rare display. Emblazoned just for us on this otherwise empty early morning as we sped down that stretch of road to start our week of toilsome work.

It was an incomparable sight, a once in lifetime event this far south. I pleaded with Matt to check it out, pull over and get a camera — something.

He didn’t care. I couldn’t believe it. He just kept driving. I was enthralled, mesmerized, my head hanging out the window and relishing the moment. Feeling oddly alive and distinctly special for being able to witness such a sight above the lonely highway that spectacular morning. The driver? He couldn’t care less.

An illegal u-turn began to change my view of Matt

Matt was tough to figure out. On another journey, this one very late night after leaving a bar, he and I were heading down the freeway near Wenatchee, when he suddenly slammed on the brakes, whipped the car around and careened the other direction. My sunglasses on the dash flew out the passenger side window, and I yelled at Matt about how much they cost.

He yelled something back, and then he slammed on the brakes, threw the car in reverse and commenced to re-careen the way we came, backwards, for those stupid sunglasses. It was then red and blue lights went on from under the overpass just behind us.

The Sheriff informed us at the driver side window that he was willing to ignore the speeding (totally Matt), the illegal U-turn (totally Matt) but there was no way he would ignore backing up on the highway (my stupid sunglasses). He was hauled off to jail and charged with D.U.I. in a town three hours away from his home. One of the worst predicaments a person in our trade can find himself in, and I was to blame.

At work the next day, he showed up about 3 p.m., just before quitting time, the boss having bailed him out. I thought I was a dead man. There was no way around it. I was certain he was going to hurt me, severely, and I deserved it.

And Matt? He laughed about it. Just one of those things. He actually seemed in a better mood than usual, all smiles. Too unreal. I was suspicious. I thought maybe he was showing mercy by not stuffing a hole in my face in front of everyone else, waiting to get me alone. I was wrong.  I tried to tell him I was sorry for my part in the situation, and he turned and walked away, having no part in apologies. He treated it as if nothing had happened at all.

I could not have felt worse.

Up until that incident, I learned not to go in public with Matt. I would avoid it if all possible, making all kinds of excuses not to accompany him into stores or restaurants, as he had a knack for confrontation, drama and embarrassing comments.

I’ll not get too particular about these, but being loud, vulgar and obnoxious was Matt’s preferred state. No one was immune.

After my stupid sunglasses incident had resulted in a direct cause to the terrible legal situation he found himself in — and he was no stranger to law troubles — I made it a point to put aside my feelings toward his vocal tirades and play like a good friend should. And we went everywhere together. Before, when he would mouth vitriolic statements to whoever was unfortunate enough to be within earshot, I would distance myself from him and respond with body language and cues that implied, strongly, that I just work with the guy.

But later, I would stand near him, let him say what would, and found a closer balance in my reaction that would emulate, “You might not like what he says, and I might not either, but he is my friend, so tough luck.”

One day after work, we went to KFC to eat cheap on an all-you-can-eat special they were offering. As I was finishing up, Matt got up, went to the counter and asked the man behind the counter for a to-go box. The older gentleman kindly informed Matt that since we chose the buffet, we were unable to take any food out of the restaurant.

Matt then explained to the nice man that he just wanted to take bones home for his dog. The man smiled at Matt and handed him a flip-top large box with the Colonel Sanders logo on the side. Matt turned, went straight to the buffet and over-filled the box with fresh chicken, turned to me, said, “Let’s go,” and proceeded out the door.

I franticly tidied up our table completely, shoved all garbage into the trash slot, set the tray where the trays were to be set and empathetically shrugged to the nice, stunned man, “Sorry, but it’s not my dog,” as I followed Matt’s footsteps out the door. The manager just watched us walk out, not saying a word.

That incident was the last memory I have of Matt. He became like many others, just a fellow worker having taken a separate path from my own, fading out of my life into God knows where.

I once heard he went back to Montana, where his roots were and his personality was forged. I know little of his story except he was part Native American, and he had done time in prison.

I value having met Matt. Nothing that has come out of anyone’s mouth since has been able to shock me too far into surprise. I know that he valued people he could trust, and he would stick up for people he valued, to the point of personal harm to himself. Family and true friends were worth it.

I squint hard to see something special in rude and crude people I too easily want to dismiss as not worth the trouble. Because they are trouble. Yet, like Matt, I have found they have value, too.

Previous Living the Mysteries
Next How to Ask for a Sign From the Universe, Angels and Spirit Guides