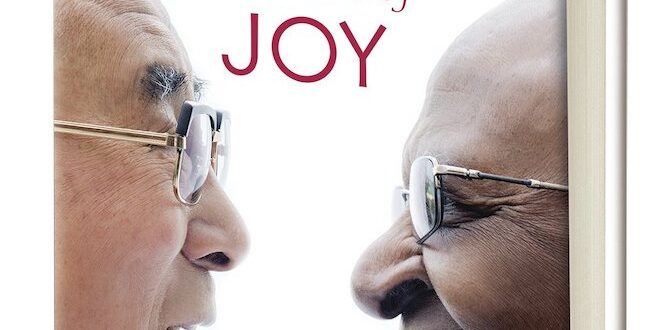 "The Book of Joy"

A Spiritual Unity that Embraces us all

A Spiritual Unity that Embraces us all

I’m fascinated by how some FāVS articles relate to a 2016 book I recently read, “The Book of Joy: Lasting Happiness in a Changing World.” It documents discussions between the Dalai Lama and the late Archbishop Desmond Tutu on the nature of joy. These octogenarians, both Nobel laureates, were from disparate cultures and religions, yet their love for each other and the world was palpable. The dialogues were recorded when the two met in India, the Dalai Lama’s residence-in-exile from his Tibetan homeland, to celebrate his 80th birthday.

My audiobook’s unexpected bonus was the recorded voices of the men interacting spontaneously as they answered a moderator’s questions. Listening to their joyful spoken cadences, punctuated by frequent laughter, provided an experience unavailable through reading alone. I found it uplifting. The book is unnecessarily long, but the experience was worth the time spent.

In comparison, recent FāVS posts provide a vista over a broad spectrum of religious perspectives in the Inland Northwest. Discussing why belief in God has dropped, Scott McIntyre explores what it means to become a Christian, to have a personal relationship with God.

Personal faith for others involves community collaboration among different organizations reaching out to the disenfranchised, particularly the homeless. “Atheists, agnostics and believers form a no-barrier coalition” to create a sense of community with the help of volunteers and donations. It was conceived and is directed “by individuals with lived experience” as well as “grass-roots organizations and nonprofits.”

Jermaine Williams, director of the Freedom Project East and a practicing Muslim, points out “the Freedom Project is a collaborative network of individuals, businesses, churches, fellowships and nonprofits,” many with “lived experiences.”

This “collaboration between local faith-based and non-faith-based organizations” provides “fresh, healthy and locally-grown food” to those “who don’t have access to such produce otherwise,” creating a better life for others. Such charity transcends the narrowness of any religion.

Although commonalities exist among life’s experiences, each life is unique. Apparent failure is common. A recent introspection explored how “failing is a part of life, and it’s OK.” It describes some of the perceived “failures” of establishing and developing this now successful website.

My own early decades were a string of failures throughout my early education and my freshman year. Those slowed after I flunked out of college and marked time for two years in the military, but I was a slow learner. After four more mediocre years at another college, I barely graduated.

Then things changed. My first five years out of college provided invaluable writing and editing experience at two newspapers and two public relations organizations. I also married and became a Baha’i.

I abandoned that budding career to attend graduate school. With advanced degrees, I wrote about environmental issues for corporations and governmental agencies. Decades later those careers ended with an 11-year stint teaching English in China. Along the way, small failures nudged me in more successful directions.

The Ups and Downs of Life

This personal digression illustrates the importance of understanding, as we move through our lives, that life itself is a series of ups and downs. This is where positive belief is essential. Without such a belief system, life’s downers will devastate, possibly destroy, us. Life’s tests serve a purpose. They strengthen us by calling attention to our weaknesses and allowing us to strengthen ourselves as we make course corrections.

Baha’is often say, “No tests, no growth.” Our scriptures support this. They identify tests as a “healing medicine” that will “enable us to draw nigh unto” God. In another passage, Baha’u’llah wrote, “But for the tribulations which are sustained in Thy path how could Thy true lovers be recognized …”

This brings us back to our quest for joy. “One great question underlies our experience,” the Dalai Lama said: “What is the purpose of Life?” He believes, answering his own question, “the purpose of life is to find happiness” and that “the ultimate source of happiness is within us. … We must look inside.”

“What you said,” observed Archbishop Tutu, “is quite wonderful. … As you grow in the spiritual life, whether as a Buddhist or a Christian or any other tradition, you are able to accept anything that happens to you. You accept it not as the result of your being sinful, that you are blameworthy because of what has happened—it’s part of the warp and woof of life. It’s going to happen whether you like it or not. … [The question] is, how can I use this as something positive?”

The Spokane interfaith programs mentioned above address this question. Implementing the Golden Rule, embraced by all religions, they bring hope to the disadvantaged among us.