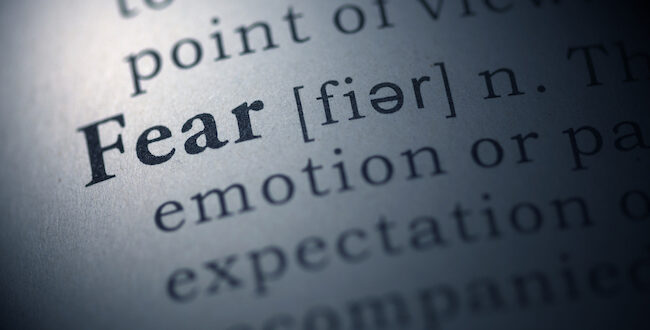 Dictionary definition of the word Fear/DepositPhoto

A Sense Of Rising Fear

It is a familiar feeling, a familiar sense of unease, panic of a sort. And I have had that feeling before.

The news has been relentlessly negative. From images these last several days out of Portland — anonymous federal thugs detaining citizens and spiriting them away in unmarked vans — to news of new pandemic deaths, to reports of the president’s efforts to frustrate free speech and free assembly; I have that feeling remembered from so long ago. The world on fire. Our present so dark. Our future endangered. Our hopes diminished.

And I feel a rising fear.

I remember that feeling from the last time in my life when events seemed to be spiraling toward the abyss. It was 1968.

Thousands of American soldiers and Marines were dying in Vietnam. The February Tet offensive put the lie to official claims we were winning the war. Anti-war protests were becoming increasingly confrontational, particularly on college campuses.

We had a president few people trusted and who preferred the company of sycophants to truth tellers. He was smart enough to quit the presidential race, only to be replaced at the end of the year by Richard Nixon, the man who would become the most corrupt president in American history — to that point.

In our cities, the promise of the civil rights movement had frayed as national attention was diverted to the war. Those interested in scaling back hard-won civil rights gains launched their own counter-offensive, ramping up racial fears of the “silent majority” as part of a deliberate Republican presidential campaign strategy.

In April, Martin Luther King Jr. was murdered in Memphis and our inner cities exploded in pent-up frustration. In June, the night before my high school graduation ceremony, Robert Kennedy was murdered in Los Angeles; the symbol of lost Camelot snuffed out, and along with him, the hopes of a generation.

Then, in August, in Chicago, anti-war protesters and Chicago police literally went to war in the streets outside the Democratic national convention.

I was days away from my freshman year in college, and I was scared. It took some time for that fear to ease.

It took the United States 15 years to regain a sense of normalcy, though it was in many ways a false normalcy, so many of our divisive national issues simply papered over.

And now I am feeling that same uncertainty, that same familiar fear.

In the U.S., the Covid-19 pandemic killed twice as many Americans in 100 days as were lost in Vietnam over roughly 15 years — and that was before the most recent surge. Legitimate efforts to blunt the death toll have become politicized, the science ridiculed and disregarded, the nation’s most respected epidemiologist insulted and sent to the sidelines.

Racial divisions are as deep as ever, maybe deeper. The forces that would divide us further, that would roll back hard-won gains and engage in white-lives-matter racism are ascendant.

Man-caused climate change threatens the future of our children and grandchildren while the U.S. disregards the threat and libels the climate whistle blowers.

And we have an ignorant, racist, authoritarian president, increasingly unhinged, who is dismantling the institutions of our democracy while surrounding himself with sycophants and enablers who have traded our democratic systems for economic and judicial self-interest. The deployment of unidentifiable federal agents to Portland and now, apparently other cities, is a cynical political maneuver designed to depict Democratic communities as war zones and to provoke an ever more forceful response from protesters.

President Trump will not do a Lyndon Johnson. He will not withdraw from the 2020 race and leave the task of solution-building to others. Worse, it is increasingly probable he will decline to leave office even if he loses the election, he said as much in a recent and astonishing interview with Chris Wallace of Fox News. Will the armed militias and white supremacist groups he has nurtured — his definition of good people — rush to defend him? Will the military support him? Will the Supreme Court validate him?

As various crises have roiled our society in recent years, I have argued that patience will out. That is what I have told students in my University of Idaho classes. These things come in cycles. The Great Depression threatened our democracy but then produced the greatest generation that then defeated international fascism. The violence that threatened the post-war civil rights movement produced the landmark civil rights legislation of the early 1960s and gave us a generation of great civil rights leaders, Martin Luther King Jr., the late John Lewis being only two of many.

How will this current cycle end? Have we moved too close to the abyss? Is our footing so uncertain we cannot recover?

I have that 1968 feeling again. I am self-aware enough to recognize the rising fear. But I have been a solutions-based journalist long enough to understand that fear is a disabling response. Avoidance is worse. Engagement by and with people who can discern a better way is the only meaningful response. So is activism.

I am not sure what that looks like moving forward. Still, it is long past time to figure it out — personally and collectively.

You can help support us by making a donation to FāVS today!

Previous Ask A Buddhist: Buddha’s Forgiveness
Next Sisters from Monastery of St. Gertrude Work to Serve Communities During COVID-19