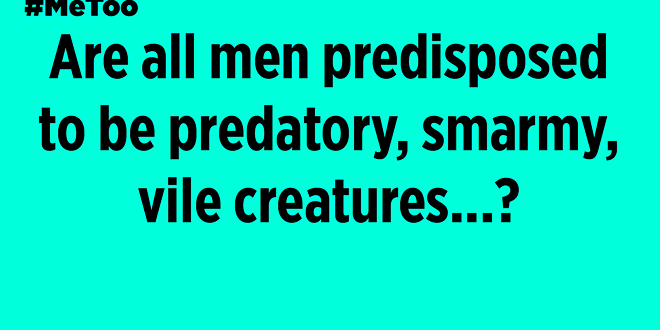 Stephanie Cates, the chair of the Spokane County Republican Party, contributed an op-ed about the #MeToo movement to the Dec. 14-20 issue of the Inlander. In it, she reassures us all that not all men (read: #NotAllMen) are “predatory, smarmy, vile creatures,” which is certainly good to hear. It’s also a common way to shift the focus of a conversation from women’s specific concerns to men’s desire to defend themselves from perceived generalizations about their behavior. However: 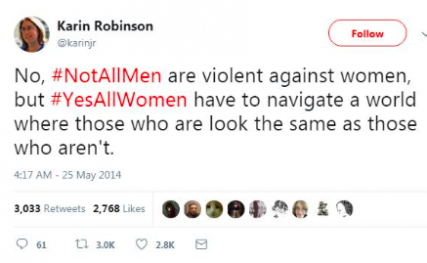 …when a woman is walking down the street, or on a blind date, or, yes, in an elevator alone, she doesn’t know which group you’re in. You might be the potential best guy ever in the history of history, but there’s no way for her to know that. A fraction of men out there are most definitely not in that group. Which are you? Inside your head you know, but outside your head it’s impossible to.

This is the reality women deal with all the time.

In the Inlander article, Cates writes: “The only men to blame for sexual misconduct are the individuals who actually commit the misconduct.” I’d argue that the ones who haven’t harassed or assaulted but aren’t doing anything to actively combat sexism, misogyny, and rape culture are, by their inaction, de facto helping to prop up the structures and institutions that make violence against women so ubiquitous.

Cates concedes that maybe societal factors play a role, but to her these include “the decline of traditional virtues” (an age-old conservative cri de coeur) and, yes indeedy, porn. On the subject of traditional virtues’ slide into oblivion, Cates commends Vice President Mike Pence’s heroic dedication to not being alone with women not his wife, a subject I’ve addressed previously. What I’m not seeing in Cates’ impassioned plea for “traditional virtues” and “gentlemanly behavior” is an equally fervent condemnation of a president who exhibits so little of either. Maybe that part of her essay was cut for length? A pity.

As the parent of an 18-month-old boy, perhaps the part of Cates’ article that most riled me was this: “We won’t solve the problem by compelling men to get in touch with their ‘feminine side,’ or forcing boys to play with dolls instead of monster trucks.” Since I was very young, I experienced more kinship with girls than with boys, and then more with women than with men. For virtually my whole life, I have had more traits and tendencies traditionally associated with women than the majority of men I’ve met.

My “feminine side” isn’t something I can decide whether or not to get in touch with; it’s an integral part of who I am. In fact, we can do without the ”feminine” label entirely and just call these qualities what they are: gentleness, tender-heartedness, sensitivity, a strong interest in interpersonal relationships and communication, and a strong aversion to violence, even in the realm of sports and recreation.

My father was a man who unashamedly showed his feelings — not all the time, but deeply when he did so. Boys in our society are told early and often not to show their feelings, not to spend time trying to figure out what they’re feeling, and above all to be tough, rugged, unflappable, stoic, and pretty much numb. Ms. Cates, this isn’t good for boys or the men they’ll grow up to be, and I don’t see how what you’re suggesting will help anyone. I’m not going to “force” my son to play with dolls, but we’ll provide them, and he’s welcome to play with them if he wants to. He already wears pink sometimes. When he’s older, he can decide if he wants to continue doing so.

I’ve also written about the supposedly catastrophic “feminization” of society, and lemme tell ya, we don’t need to be heading to the bomb shelters just yet. Society is fine. Many men have made a hash of much of this world; maybe some feminization would do our society good. If nothing else, we would do well to scrap the narrow, and often artificial, delineations we’ve historically made between genders. As I wrote in 2015: “If you refuse to label toys based on gender, [children] may see more options and room for exploration. If your research determines that boys like war and girls like peace, then that’s what you’ll offer kids, and that’s what most of them will want.”

Later in her essay, Cates quips: “Sorry ladies, but you don’t command respect by shouting vulgarities and parading around in vagina hats.” I attended the Spokane Women’s March with my family. The women we marched alongside that day certainly commanded my respect. When you’ve been systematically mistreated, and in some cases traumatized, or have watched friends and family go through such turmoil, the anger you feel has to come out somewhere, somehow. Why not vulgarities and vagina hats? Too often, respectability politics is precisely what holds back powerful social movements.

Cates conveniently ignores the reason these marches happened, or at least the main catalyst: the election of an admitted sexual predator to the nation’s highest office. Cates writes that “the perverts are exposed and the powerful are toppling,” but one in particular remains stubbornly untoppled, and plenty more ungentlemanly sorts are likewise holding fast to their lofty positions. Some men in authority who took advantage of terribly flawed societal structures have been unmasked, and some have been removed from their roles. Many more remain.

The last piece of Cates’ argument reveals a questionable grasp on the realities of being victimized. She writes: “And finally, here’s something that’s a great equalizer in our battle for equality: the Second Amendment. I guarantee a man will think twice about messing with a woman who carries a firearm and knows how to use it.” Will a woman in the military who faces ongoing harassment or worse simply pull a gun on her commanding officer? Should Monique Cotton have told former Spokane police Chief Frank Straub she was packing heat, so he’d better watch out?

A gun may — may — allow a woman walking home alone at night to scare off a would-be assailant. But reducing the problem of sexual harassment and assault to such a specific, archetypal scenario misses a much bigger picture that’s messy and maddening. For women who are subtly but persistently harassed by their bosses, there can be a lot to contend with: complicated power dynamics, institutional politics, and a lot to lose for the women themselves, financially and otherwise.

Many female celebrities have been, at one time or another, harassed or assaulted by powerful men. Should they have whipped out a pistol and quit? In a post-Anita Hill world, we can’t ignore the fact that women who come forward risk having their lives torn apart. Even today, a substantial portion of Americans won’t accept that Roy Moore — or Al Franken, or Dustin Hoffman, or Jeffrey Tambor — did what his accusers claim unless a trial is held and he is found guilty. Personally, I’d rather err on the side of believing the victims and risk getting it wrong a statistically tiny number of times.

Cates wants us, as a society, to “hit the reset button on our values.” I agree that winds of change are well overdue. However, she and I disagree about which values we need to “reset” to. I’d suggest comprehensive sex education that emphasizes consent. I’d recommend not weakening campus sexual assault investigation guidelines. And I’d push for an understanding of gender, sexuality, and systems of oppression that doesn’t just pin the blame for sexual misconduct on individuals, call for a return to “traditional virtues” (whatever those might be), and scapegoat porn for the 600,000th time. (It “inspires too many men to act on carnal impulses,” Cates writes. Source, please?)

This country’s increasing diversity is a genie you can’t put back in the bottle, though it’s hard for me to understand why anyone would want to. Defenders of “traditional virtues” may feel under attack at the moment, but it’s still America’s immigrants, Muslims, people of color, LGBT folks, and women — among other people groups — who face most of the harassment and violence. If conservatives like Cates truly want to improve our country, they should bear that in mind.

Previous How to listen to people you disagree with
Next Ask A Mormon: Can you be baptized after death?