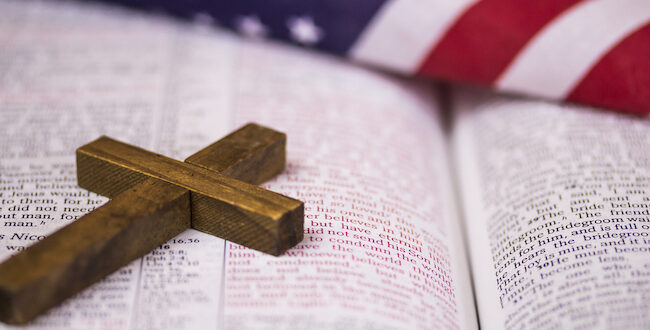 A Pastor Looks at Christian Nationalism

A Pastor Looks at Christian Nationalism

After penning his famous “love chapter” (I Cor. 13), St. Paul follows with this directive: “Make love your aim…” (I Cor. 14:1). Not coincidentally, one of “sin’s” biblical descriptions is “missing the mark.” I wonder if that mark is “love.” Most likely it is!

Perhaps this is part of my distress, even disgust, with the aggressive, often violent, presence of white Christian Nationalism in our culture today. I see nothing loving about this dangerous blending of patriotism and so-called Christianity. Ironically perhaps, this ideology strongly demonstrates that hate of persons not like them is their real aim! No real love there!

So what is this “white Christian nationalism” I’m ranting about?

I take responsibility for this descriptive recipe: white Christian nationalism begins with a pinch of genuine love of American values, vigorously blends in a yeast born of fears and phobias of too many kinds to count, sprinkles an unhealthy portion of distorted Christian beliefs and symbols. Then the concoction is dumped into a centrifugal mixer. The mixer then sprays the unholy ingredients outwardly (centrifugally) and indiscriminately splatters whoever’s in its way.

A more subtle example of how Christian religious intentions and national patriotism can be (in my opinion) mixed in unhealthy ways is the heavily back-ordered “God Bless the USA Bible.” This Lee Greenwood project undermines any valid church-and-state separation by putting the biblical text alongside the US Constitution, Bill of Rights, Declaration of Independence, and the Pledge of Allegiance.

I could drone on longer about Christian nationalism’s toxic presence in our country today. But a better use of this space is to re-consider what a healthy role of Christian faith has been, and must be, in our American culture. It begins with St. Paul’s “Make love your aim…”.

It also includes more than the Christian tradition. We are more and more obviously blessed with a wide variety of religious traditions. Christian nationalism seeks to impose its toxic brand of religious expression on persons and national institutions; while healthy Christian faith welcomes the spiritual wisdom of other traditions today.

Religious wisdom can – and does – have a hopeful, leavening impact on the political dynamics of our country. Each tradition offers its unique wisdom and ways of living out that wisdom.

Healthy Christianity has traditionally offered our country a measure of “re-balance”, a reminder that when imposed, religion is abusive and toxic.

Healthy Christianity speaks prophetically that the power of love must disrupt and replace the love of power for our society to become more compassionate.

In word and deed, it challenges the political status quo in favor of the transforming subversiveness of the Jesus Ethic – that embodies justice, not injustice; humility, not arrogance; love, not indifference; hope, not helplessness; experiences of love, not demands to obey; truth, not certainty.

I honestly wish I had something positive to say about Christian nationalism. I respect persons who love our country. But I see too many people fall into the trap of political/religious idolatry.

They seem unable, or unwilling, to honestly see how their unswerving loyalty to a person or a rigid ideology has unhealthy, destructive, consequences on our culture’s systems and the individual persons those systems supposedly serve.