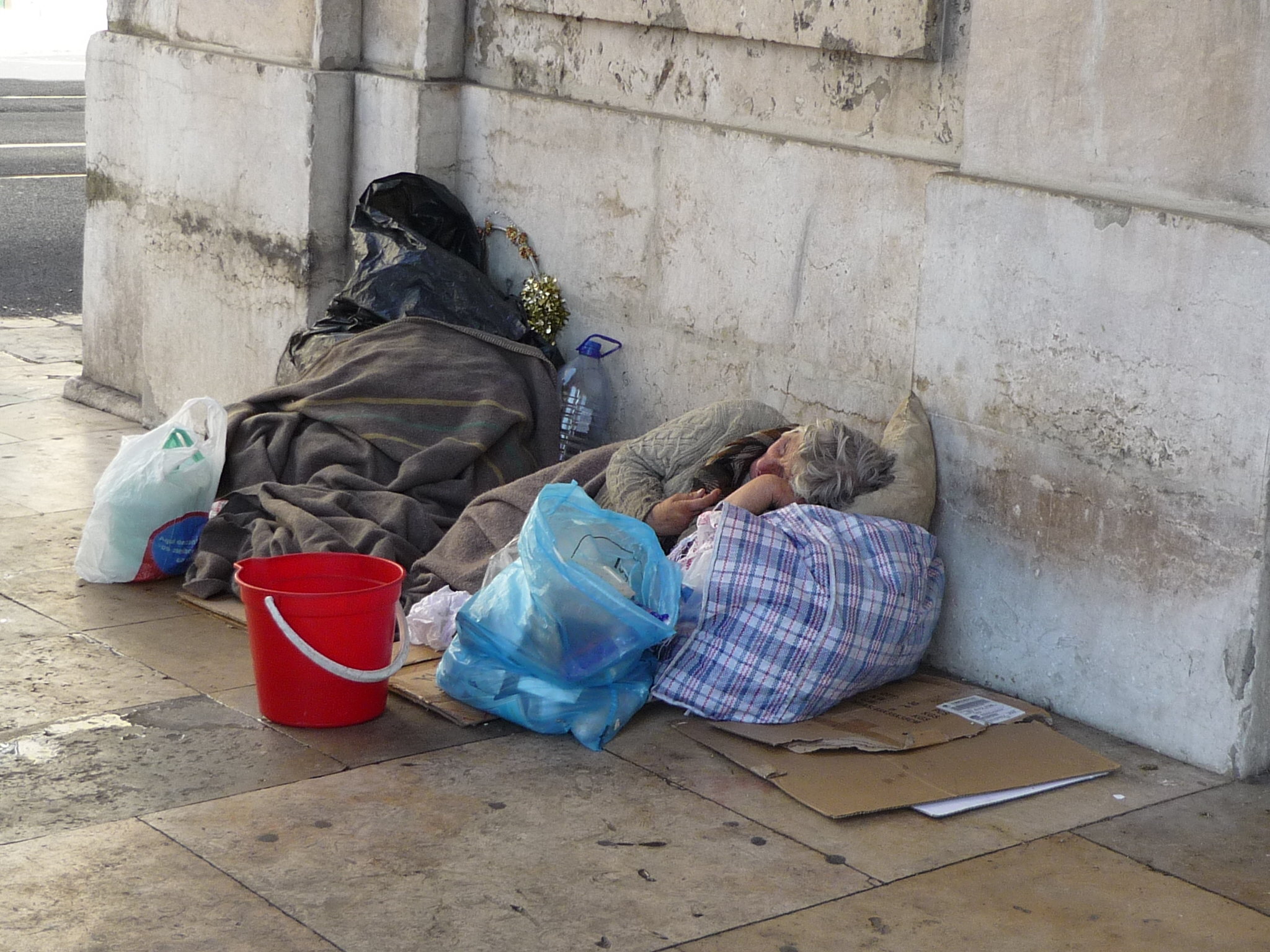 A night with the homeless 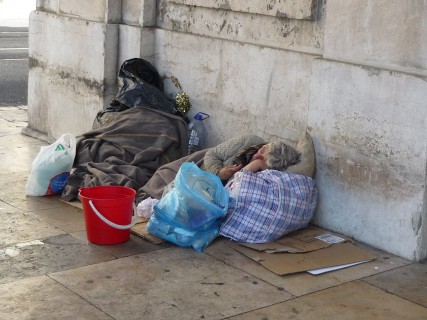 A group of us recently participated in an “Urban Plunge”, where we slept the night in a homeless shelter. We stood in the food line, ate and talked with Spokane’s homeless. I had a desire and curiosity to increase my understanding of homelessness and decrease my distance and separation from those less fortunate. I had a suspicion that I was far too comfortably distanced from homelessness and thus, the sense that I was not sufficiently standing up for their rights as human beings. Homeless folks are often seen in the everyday marketplace as a nuisance, unwanted, disregarded and unacknowledged. By not speaking out when someone uses distancing language regarding a homeless person, I am complicit and encourage their dehumanized status.

I suspected that it is not doing enough in my case to just talk to homeless folks during the brief stops at intersections, where I try to affirm a homeless human being by smiling or looking them in the eyes, and asking and trying to remember their names, or when I give them some change or bread. A typical exchange like this takes a just a few seconds. Both parties feel a little better. This acknowledgement of valuing and confirming each other is important, it improves the circuitry of compassion. However, this still allows too much distance, it is still too convenient. It allowed me to stop thinking about the situation. So for me taking part in the plunge was about reducing that gap further, allowing their voices in my life, so as to make a step in the direction of wholeness. And also to be more in alignment with the precepts I have taken with my community of spiritual practitioners, of not killing (in this case their humanity, dignity, and potential for growth), not praising self over other, pride, vanity, etc. Each of these destructive emotions and behaviors can easily lead to increases in the unequal treatment between human beings.

Some of the things I found notable during this night and morning with this Catholic Charities homeless shelter where we got some great information and insight by the homeless. They told us about how they learn to not take basic things for granted that most of us do, like food, shelter, and clothing; even restrooms (most places won’t allow homeless in, unless they buy something). Several homeless guides told us that when they walk downtown, they walk the alleys between streets rather than the sidewalks on the public streets. This surprised and saddened me. Surely, I thought, the streets would be safer, better lit, than dark alley ways? But they told us that harassment, verbal and even physical threats from the public is very common if they walk the main streets. This experience reinforced the importance fearlessness as an essential element in the cultivation of compassion/wisdom. Without each one of us intentionally cultivating courage, we cannot stand up against mistreatment, abuses perpetrated on those less fortunate, those without voices etc.

We were also reminded of the importance of hope that most homeless need. We need to always make an effort to validate, smile or in other ways acknowledge the homeless. We need to consider that many homeless folks did not grow up with the same encouragement and stable homes that many of us take for granted in our lives. They are brothers and sisters, part of the human family. I had great intelligent conversations with the homeless during the time at the shelter.

I was glad to see that folks we heard from took personal responsibility for mistakes they made. However, i also noted that some had likely been given (and continue giving themselves) “life-sentences”, like, “I’m not good enough”, etc. We all have tapes with these early learned and assumptions repeating in our heads to some extent, but some of these “life-sentences” can be really sabotaging some one's future and potential. They need extra help in breaking down this early childhood conditioning.

Someone from our group asked about why some homeless have pets, when they know that most shelters don’t allow animal companions. One of our homeless guides was quick to point out that for some homeless folks, a dog is the only being who has ever loved them, and been there for them unconditionally. So they’d rather sleep under a bridge on the cold pavement, then ask for a bed at a shelter. This alone says a lot at how much encouragement is needed.

The question came up as to why folks might shy away or avoid dealing with, and confronting homelessness? My guess is that the more superficial reasons behind looking away when seeing a homeless person could be the idea that associating with certain individuals of differing socio-economic groups somehow will rub off. By associating with certain group, we might fear that this creates self-signaling that we too are part of that class and perhaps this will drag us down. So acknowledging someone in poverty somehow cuts into our self image, or even challenging our “the world is all well” world view. I also think this is partly because it confronts us with the realization that deep down we know our fellow human beings should not be treated as unwanted and unworthy, that we are all in one way or another, complicit in a system that allows these huge inequalities. It also touches our own deep-seated fears of abandonment and we don’t want to face these real vulnerabilities inside ourselves. And the truth is, it could happen to us too. Most of us have some degree of subconscious or conscious fear of becoming homeless and food/housing insecure ourselves, through unfortunate circumstances, like sudden physical illness that puts us or loved ones out of work, loss of insurance, wiping out our savings, etc. We can really not be absolutely sure that this couldn’t happen to us.

These avoidance responses, I think, are similar to folks not wanting to see death in their families, as it reminds them of their own mortality, or not wanting to know the cruelties involved in how industrialized meat gets to our tables. Or hating gays, because they may have unexamined and unacknowledged feelings in themselves. Our days can be more happy if we can just pretend it is not our problem and look the other way. It is uncomfortable and depressing to look at the suffering and systemic issues in society. It might be tempting to want to think that the homeless folks just need to get a job and get on with it, but as one of the homeless persons, Anne mentioned, it took her six months after she got an apartment to even get the first chair into it, due to major anxiety issues. Folks who have been down very destructive paths, need a lot of help and counseling to get them on the track to independence. It will be a lot cheaper for society to deal with these issues of homelessness or incarceration, by helping these folks deal with root causes and help them grow into their potential, rather than to dump them out on the streets, and let them go to emergency rooms, or warehouse them in prisons with nothing to do and nothing to derive meaning from.

Now that I've heard some of their stories, I can see that they need more than the basics of safety, food, clothing and housing. They also need counseling and job training and beneficial activities. The shelters do a great job of providing as much of this as possible on the irregular donations they get. With regards to what the homeless folks need, I’m not talking about blind thoughtless or condescending handouts, but rather giving those who were not as fortunate and encouraged as most of us, skillful help and dignity and an opportunity to discover and nurture their own innate potential or talents.

In my spiritual practice, and I think most wisdom traditions articulate this similarly, I found that most of what ails society, and what has caused human-made suffering is related and the result of separation, the idea that we are all somehow separate beings. The resultant distancing (which is not just our generation, but has been ongoing for countless generations) concretizes and institutionalizes separation, whether this is separation in the food system, prison system, divided nations, language distancing, homelessness, subprime derivatives, etc. The more dehumanizing distancing we allow, the more corruption and suffering as a result.

By keeping a connection with homeless brothers and sisters, they can be assured they have one more voice, two with my wife joining in, in places where their voice does not reach.

Sicco Rood began exploring spiritual ideas in his teenage years and was drawn to those who followed a path of understanding, kindness, compassion and non-separation. This led him to Zen Buddhism and the practice of meditation. Rood is an active member of the Zen Center of Spokane.

[…] small blog post i wrote to describe my experience and thoughts about an, “urban plunge”. Listening to […]