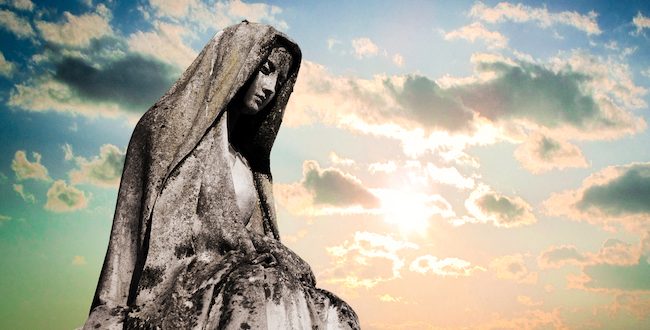 A new Christmas pageant shows off the fierce side of Mary

SPOKANE, Wash. (RNS) — If you ask the Rev. Katy Fitz Shedlock, there is something wrong with the way Mary is portrayed in most church Christmas pageants.

Mary is often played as the “most perfect, most boring girl,” said Fitz Shedlock.

“She’s just a silent prop up there, holding a baby and looking sweet,” she said. “But she’s way fiercer and more powerful than that.”

This Christmas the pastor is revamping the Nativity drama at Creator’s Table, a congregation she co-pastors in Spokane, to show off Mary’s fierce side.

Dubbed the “Deleted Scenes Christmas Pageant,” the play skips most of the traditional elements of the Christmas story. There are no wise men, no shepherds, no camels or sheep and no star in the sky.

Joseph is mentioned in the pageant but he’s offstage. And most of the events take place before the birth of Jesus.

Instead, the pageant, which portrays Mary as a modern, strong teenage woman, emphasizes a portion of the Christmas narrative called the Magnificat.

Also known as the Song of Mary, the Magnificat is found in the Gospel of Luke, when Mary visits her relative Elizabeth, who is pregnant as well.

In the first part of the Magnificat, Mary gives praise for being chosen to mother Jesus. In the second half, though, her message changes, said Robert Tannehill, emeritus professor at Methodist Theological School in Ohio.

“She talks about God overthrowing human rulers and overturning society and showing strength against the proud and the rich,” he said. “Mary is important for her role as the mother of the Messiah, but is also a representative of the people of low status, the oppressed.”

“Her tone is often meek and mild, but she’s talking about overthrowing the system,”  Myers said.

In the Deleted Scenes Christmas Pageant, Mary will be played by a teenage girl from a nearby Methodist church, who wears a baggy hoodie, gets kicked out of her house, texts Joseph and talks back to the angel Gabriel.

Instead of a meek, sinless girl, Fitz Shedlock, a competitive slam poet, said she wants the audience to see Mary as a troublemaker, someone who isn’t afraid of upsetting the status quo.

The pageant idea stemmed from a poem she wrote last year about Mary and the Magnificat, called “Hail Mary.”

In it Fitz Shedlock writes:

“We skip the moment

where she walks up to the mic,

a teenager starting to show,

she makes us nervous

the verses fly by,

more of them than any other woman in the New Testament.”

Christmas pageants at churches have a long history. St. Francis of Assisi is credited with staging the first Nativity scene, according to his biographer, St. Bonaventure.

And pageants remain an effective way of engaging worshippers, said Fitz Shedlock, a Methodist minister who co-pastors the Creators Table with Myers, an Episcopal priest. The congregation uses spoken word, stand-up comedy, live art and other alternative worship experiences in its services.

“That’s the power of the tradition of pageants, whether they be Christmas pageants or Passion plays; there’s a lot of power in asking people to incarnate a story,” Fitz Shedlock said.

Ultimately, the pastors hope those who see the pageant on Dec. 23 will rethink the Christmas story — and view Mary as anything but boring.

“I think the No. 1 hope is that Mary would be uncovered and become more of a three-dimensional human being,” Fitz Shedlock said. “Maybe it will leave some questions in folks’ minds about what we choose to show or not show and why.”