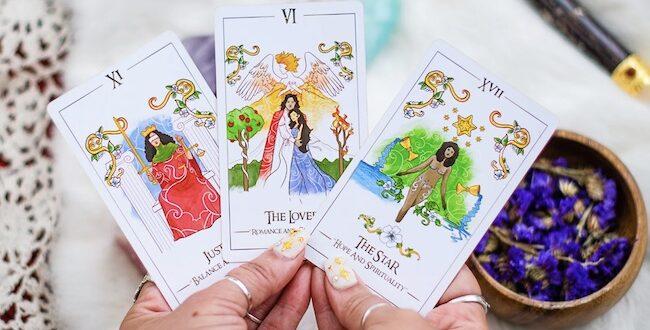 Cards of The Simplicity Tarot deck are displayed. Photo courtesy of Emilie Muñiz

A new aspect of the Tarot boom: Diversity in the deck

A new aspect of the Tarot boom: Diversity in the deck

Since before the pandemic began, the boom in sales of tarot decks has served to complete a piece of the spiritual puzzle surrounding Generation Z: They may be famously areligious, but they are still getting their spiritual fix through old-school practices such as tarot.

A recent study has now added a new piece: Tarot’s popularity is being led by young people of color.

According to recent research from Springtide Research Institute, young people identifying with various indigenous groups, including First Nations, native Hawaiians and Alaskans, report the highest rate of tarot use, at 64%. That is followed closely by Black youth (62.9%) and then LatinX youth (55.3%).

Traditional tarot divination practices find their roots in European-based gaming, occultism and mystical practices. The most well-known and influential deck is the Rider-Waite-Smith, created by British mystic Arthur Edward Waite and artist Pamela Colman Smith. It was first published in 1910.

However, divination practices, often called fortune telling, are found across cultures and are an accepted aspect of many communities.

Emilie Muñiz was first exposed to fortune telling as a child in Brooklyn, New York. Her mother would regularly invite spiritualists, or Espiritistas, to their home to do coffee readings, a common practice in Puerto Rican culture in which patterns in coffee grounds at the bottom of a cup or spilled onto a saucer are interpreted as signs. “It was normal for us,” she said.

When she was 11, one Espiritista told her that she “had the gift” and asked her to read the coffee. That experience led to tarot, and Muñiz has been reading ever since. Today she is a full-time professional reader.

When she began, Muñiz said, the tarot community was predominantly white. People of color ”were out there” but not public about their practice or on social media, she said.

Muñiz often felt that she needed to do extra “to get attention, to be heard, to be taken seriously,” she said.

The other hurdle was the decks themselves; she wasn’t seeing herself in the figures on the cards, which were also overwhelmingly white. “For me it was just a normal thing that we were not included,” Muñiz said.

She first noticed a change “creeping in” around 2015. Five years later, in 2020, she launched a kickstarter campaign for her own deck, The Simplicity Tarot, raising $21,000.

The first set sold out immediately, which prompted her to publish a second Red Rose edition that also sold out. A third version will be released by US Games this week. She describes her decks as “welcoming and light” and uncomplicated, with “many different skin tones.”

Muñiz’s clients, who are predominantly people of color, have responded well to her vision. “The court cards look like people in their life that they are asking questions about,” she said, which allows clients to be more open to the reading and more relaxed.

Today, decks that capture underrepresented subcultures or ones that are widely inclusive are increasingly common: The True Heart Intuitive Tarot by Rachel True, The Next World Tarot by Cristy C. Road, or the Seasons of the Witch Oracle series by Lorraine Anderson and Juliet Diaz.

Some deck creators are aiming to directly counter white dominance: Cathleen Abalos is working on a new deck called The Decolonized Tarot: A New Deck for the Global Majority. According to the kickstarter campaign, the deck “centers Filipino culture while celebrating all others.”

Abalos began her fundraising campaign Aug. 17, asking $25,000. She reached her goal in five days, and by the end of the campaign in October, she had collected more than twice her goal. The deck is now available for pre-sale.

Mawiyah Bomani, an Ifaniyi and reader in Louisiana, regularly works with the Akamara Tarot, a deck celebrating “various spiritual practices throughout the African Diaspora.”

Like Muñiz, Bomani grew up surrounded by divination. Her grandparents practiced Santeria and her mother Vodun and Hoodoo. Becoming a reader, she said, was inevitable.

Bomani ignored the lack of diversity in representation when she started reading, though she would occasionally transform cards by gluing her own pictures onto them to enhance her connection to their meaning, saying, “I hoped and wished to find a deck with me in it.”

Seeing Themselves in the Cards

When the reader can see themselves expressed in the cards, she explained, it enhances the reading. “I am immediately connected with the energy of the cards. I know what they feel like intuitively.”

Today, Bomani follows the Yoruba tradition and refers to Tarot in all her work. “When I read, I am delivering a message from my soul,” and cards that visually or spiritually connect to her Yoruba traditions significantly aid in that process.

While longtime clients “don’t care about the visuals,” she finds that people new to readings “do want to see themselves” in the cards. If they see cards without any expression of themselves or their lives, they turn away from the process. “This can’t be for me” is what they think, Bomani said.

She believes personal empowerment is part of the reason for the growth in tarot’s popularity. Young people “want to be in control of their lives, especially women,” she said. “Tarot puts them in charge,” whether they are a reader or client. “It will take you back to the (spiritual) source,” she said, and “that is what they need.”

Muñiz agreed, describing tarot as a path of self-empowerment and of change. “Divination is embedded in many of our cultures,” she added. “Tarot is for everyone. Anyone can read. People of color, too.”