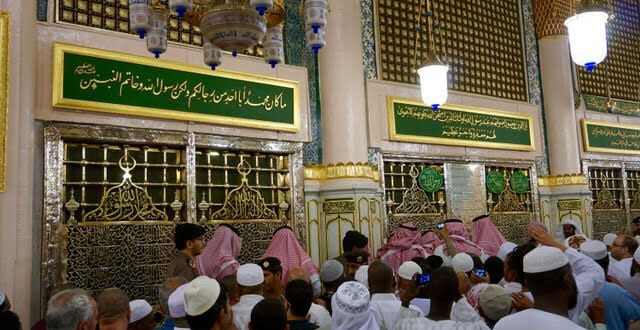 Prophet Muhammad's (pbuh)grave. People from different ethnicities and all over the world paying regards including local Arabs and non-Arabs in 2015/Maimoona Harrington - SpokaneFāVS

A message of equality: The story of Bilal ibn Rabah al-Habashi

Born into slavery was no one but Prophet Muhammad’s (Peace Be Upon Him) most trusted and loyal Sahabah (companion), Hazrat Bilal ibn Rabah al-Habashi. Al-Habashi in his name denotes his Ethiopian or African origin.

(The prophet and all his Sahabah’s (companions) are called with the honorific Arabic title “Hazrat” to honor them and show respect.)

He was owned by Ummayya bin Khalaf from Banu Hummah clan in Makkah as an African slave from Ethiopia. When he heard the message of the Prophet Muhammad (pbuh), he found himself attracted to it and became one of Islam’s earliest converts.

As stated in Oxford Islamic Studies, “Slavery was common in the pre-Islamic communities of the Mediterranean basin, Africa, and Asia. Early Islam mitigated the conditions of human bondage: it forbade the enslavement of Muslims and non-Muslims living under Muslim rule. The only legal slaves were non-Muslims who were imprisoned or bought beyond the borders of Islamic rule, or the sons and daughters of those already in captivity.”

In the beginning, Hazrat Bilal kept his faith secret because his master, Ummayya bin Khalaf, was anti-Islam. In the early days of Islam those who accepted Islam and openly declared it were brutally tortured and harassed.

When Hazrat Bilal’s found out that his slave accepted Islam, he became very angry and tortured Hazrat Bilal. Makkah Saudi Arabia has very hot desert climate. Imagine a man lies in the heat of the hot desert naked with heavy rocks on his chest just because of his belief. Yet he was steadfast in his belief and resisted the torture in different forms.

Once the news of his torture spread and the Prophet Muhammad (pbuh) heard of it, He sent his most beloved companion, Hazrat Abu Bakr. to get freedom for Hazrat Bilal. After hard negotiations Abu Bakr. was able to gain freedom for Hazrat Bilal. He joined the Prophet on his migration to Medina and many other events in the history of Islam beside him.

Edward Wilmot Blyden wrote in “Mohammedanism and the Negro race by a Negro” published in 1875 , “The eloquent Adzan or Call to Prayer, which to this day summons at the same hours millions of the human race to their devotions, was first uttered by a Negro, Bilal by name, whom Mohammed, in obedience to a dream, appointed the first Muezzin or Crier. And it has been remarked that even Alexander the Great is in Asia an unknown personage by the side of this honoured Negro.”

Hazrat Bilal ibn Rabah and his place in Islam clearly demonstrate that Islam believes in equality, justice and freedom.

Your appearance or your color of your skin do not matter. No one is superior or inferior and what matters most is your character, your deeds, intentions and actions. The Almighty Allah sees us through the lens of piety and our intentions and actions. He created us all from same matter and we have no superiority over each other. The only distinction is how we live our lives.

Hazrat Bilal ibn Rabah Al-Habashi, his life and place in Islam is a living proof and symbol of human equality.

Previous How will Joe Biden deal with the abortion question?
Next Labor Day celebrates earning a living, but remember what work really means