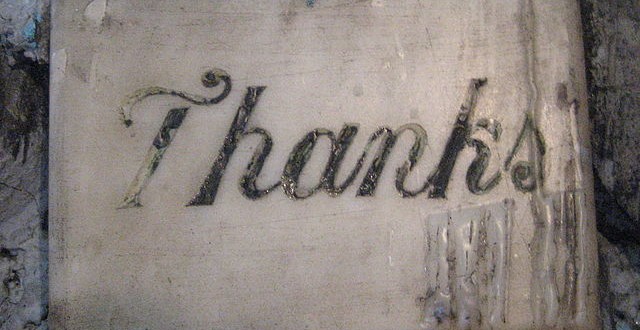 Thank you message in the grotto of Our Lady of Guadalupe Church; added by those for whom prayer or miracles were granted/Wikipedia photo by Infrogmation

A letter of thanks to an old professor

In a recent sermon, my colleague Dick Toll told us the story of writing a letter of thanks to his former scout master. Under that scout master’s leadership, Dick and his friends had hiked the Grand Canyon, paddled the Rio Grande, and rode on horseback into Mexico and back again. Dick’s letter proved to be both an expression of gratitude and, though he didn’t know it when he put pen to paper, a farewell: his old scout master was to die a year later.

Something about that story moved me in a big way. I heard in it a challenge and an invitation, a kind of call. And so, today, here is my answer to that call. This is a letter to an old professor, to the one who taught me when I first went to university. (In this public context, I’m going err on the side of confidentiality, and call him “Dr. Miller.”)

I’m writing to say thank you.

In the fall of 1990, I was 17 years old, barely out of high school and freshly arrived at the University of British Columbia. Public school had often been hard for me. I was a bookish child, a little eccentric, deeply at home in the world of ideas and imagination. And a good number of my classmates had reacted to these characteristics with mystification and, in some cases, with petty cruelties. I knew several bullies.

Your class was the first learning environment in which I felt entirely at home, in which being who I was felt in no way like a liability. Not only did you let my classmates and me know that it was good and welcome to like the world of the intellect, but you expanded the parameters of my intellect in directions that I didn’t even know existed. Almost right away I understood that the horizon was farther away and grander than I had guessed.

It was under your tutelage that I read the Gospels for the first time (I’m now an Anglican priest: who knows what seeds that first reading planted?), that I encountered Salman Rushdie’s masterpiece, “Midnight’s Children,” and that I read Orwell’s “Politics and the English Language,” a text that shapes my thinking to this day. And it was with your guidance that my writing started to take on direction and clarity.

Two moments are especially prominent in my memory. They are both small, but somehow they represent for me what it was like to study with you. They are, if you like, outward and visible signs of your teaching.

The first moment came in a large group discussion. Somehow, we got talking about the phrase, “At this particular moment in time.” And you asked us: “Can anyone think of a simpler way of saying that?” My classmates and I must have offered two dozen possible alternatives: in an act of brilliant, pedagogical mischief, you let us go on for more than a minute, so that we variously suggested, “At this instant,” “At this occasion in history,” and “At the present moment.” Eventually, you had pity on us and said:

The second moment came in of the weekly small-group meetings during which, with you acting as our facilitator, three classmates and I would critique one another’s essays (a practice, by the way, that profoundly improved my thinking and my writing). One of my classmates – I’ll leave him nameless – had lapsed into that particular kind of pomposity to which young men are vulnerable, that habit of confusing being learned with being an ass. And he had submitted an essay that contained the phrase “topical turpitude.” I will never – never – forget the moment when you read those words, leaned back in your chair, sighed, and said:

“This is the sort of thing that makes me want to turn to drink.”

If I have a regret about our time together, it is that (speaking of the habits of young men) I didn’t always work as hard as I could have. More than once I submitted an essay to you that I had both started and finished the previous day. I feel bad that I made you read what was really my first draft. And I feel sorry that, in so doing, I deprived myself of the kind of learning that happens only when a student does his or her best.

Mostly, however, what I feel is gratitude. My time in your classroom was one of the hinge moments in my life. During our year together I turned away from the easy cynicism of adolescence and towards adulthood. I turned towards critical thinking, humility, and compassion, towards that difficult and good thing that we call wisdom.

Thank you, Dr. Miller, for everything you did to make that moment of turning possible. You helped me to grow up. And, though it has been close to a quarter century since I saw you last, you are helping me still.

Tags letter of thanks