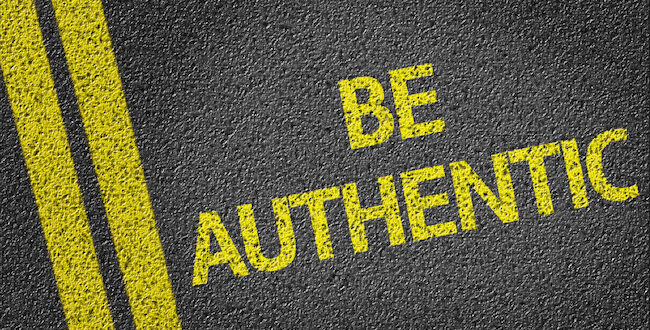 Be Authentic graphic by DepositPhoto

A Lenten Devotion: What’s Deceptive About Being Authentic

“…in a world of Christians where millions and millions call themselves Christians—that there one person expresses:  I do not dare call myself a Christian; but I want honesty, and to that end I will venture.”  Soren Kierkegaard, The Moment (1855).

What’s the opposite of deception?  Most would argue it’s authenticity, and I would join them. For a person to exhibit an authentic personality is preferable to a person who first practices to deceive. And yet, with apologies to Sir Walter Scott and the “tangled web” he weaves, if one tries to be authentic, the so-called “down-to-earth” or “what you see is what you get” personality becomes suspect, and deservedly so. It’s just not that straightforward.

Consider, if you dare, “The Wizard of Oz” — the scene, near the end of the 1939 classic, in which the little dog pulls the curtain away and exposes “that man behind the curtain.” After the Scarecrow calls him a “Humbug!,” and after Dorothy indicts him as a “Very Bad Man,” the former-balloonist from the Omaha State Fair replies with something even more dubious than the pyrotechnic displays that had previous shrouded him in mystery. He says, “No, my dear. I’m a very good man… just a very bad wizard.”

Now, perhaps it’s time to take a poll. How many of the curious readers of SpokaneFāVs would characterize as “very good” a person who would connive to terrorize his way to supreme, sovereign status? If it’s anywhere around 40 percent, God help us. Goodness ought not be so cheaply won, and likewise, authenticity.

Authenticity is, in fact, the opposite of a scam, the opposite of a betrayal, and the opposite of a massively orchestrated con-job. But, purged and refreshed by the Season of Lent, a deeper definition would be the recognition that we are (I am) constantly vulnerable to deception and even capable of deceiving ourselves (myself).

Nothing prepares me for what comes next in Jeremiah 7:4. The year is 587 B.C.E., and Babylon threatens from the north. Faithful people from all over Judea flock to Jerusalem; they gather for worship in the massive structure, built by their faithful ancestors; and who can blame them? Appeals to God in worship often produce positive results, and those results typically involve safety and security. Moreover, when the Jewish people (then) enjoy a plurality of the population as the Christian people still do today, in the United States of America, the likemindedness of that festive community fulfills the prophecy in the blink of an eye. And yet, an open question remains… What are these deceptive words?

In her book, “Trick Mirror:  Reflections on Self-Delusion,” Jia Tolentino describes a 46-acre campus, outside of Houston where she attended worship with her family. A teenage Tolentino and her friends referred to the massive facility where they sang songs, and listened to sermons as the Repentagon. She writes,

In middle school, I became aware of my ambivalence—just distant enough to be troubled by the fact that I felt distant.  I started to feel twinges of guilt at the end of every church service, when the pastor would call for people to come forward and accept Jesus:  what if this feeling of uncertainty meant that I needed to avow Him again and again?  I didn’t want to be a bad person, and I especially didn’t want to spend eternity in hell…I started getting agoraphobic in the Worship Center on Sundays. Thinking about these intimate matters in such a crowded public place felt indecent.”

Of course, the mob-mentality depicted here might be set alongside those quaint, country-church encounters in which I smile and shake hands and try to be authentically “down-to-earth.” Worshipping among a few or a lot of other individuals gives us the rare opportunity to come clean. Christians, during Lent, admit their faults, their debts, their trespasses, their sins… and the collective sigh of belief in God’s forgiveness is both paramount, and often palpable.  The dilemma, however, that persists from century to century doesn’t evaporate in the downbeat of an inspiring praise song, and goes like so:  there is a difference between an admission of one’s honest mistakes and one’s continuing vulnerability to deception and self-delusion. An honest mistake is like the manager at Arby’s who serves up a cup of black coffee in stead of the aus jus sauce intended for the French Dip. An honest mistake is the telemarketer who gets me on the phone and says, “Is this the KINDER Pyle residence?”  And I reply, “Hell no!  This is the MEAN-SPIRITED ANGRY Pyle residence, and I don’t want you to ever call this number again!” Honest mistakes, you see, are not without their consequences; and some of them can be horrible and life-changing.  “The Curious Case of Benjamin Button” has this great scene in which a young and promising ballerina crosses the street and gets into a terrible accident that breaks her leg in several places; she’ll never dance again. But here’s the summary of the main character that is, in retrospect, a barrage of honest mistakes.

And if only one thing had happened differently; if that shoelace hadn’t broken; or that delivery truck had moved moments earlier; or that package had been wrapped and ready, because the girl hadn’t broken up with her boyfriend; or that man had set his alarm and got up 5 minutes later; or that taxi driver hadn’t stopped for a cup of coffee; or that woman had remembered her coat, and got into an earlier cab, Daisy and her friend would’ve crossed the street, and the taxi would’ve driven by.

Honest mistakes, of course, accumulate over time. They pile up like dirty dishes in the sink, and we definitely may regret the countless, intentional and unintentional ways by which we do damage to our interpersonal relationships. Christianity, as its essential practice, wants to acknowledge these ‘if only’ scenarios if only to eliminate the clutter of despair. But a more tenacious malady of spirit, particularly in this season of Lent, comes to the surface among our fellow worshippers.

Do not trust in which deceptive words?

Now, what in the world is so deceptive about ‘the temple of the Lord’? I’ve been under the impression—haven’t you?—that every temple, every mosque, every cathedral and, most relevantly every church which identifies itself with the words “Real” and/or “Life” is typically the place where men, women and children can be themselves. We all want the religious experience of the bar in Cheers because “sometimes you want to go where everybody knows your name…” And because “you wanna go where people know that people are all the same.” Sameness, it seems, breeds security. And it’s perhaps our pride in that sameness that makes us empathetic for everyone whose ever made an honest mistake.

Even so, there we have it… on presumably good authority. There are worse things than not feeling like you belong to the same old safe crowd of safe people, and there are better things, according to Jeremiah, than feeling like you do belong. In either case, in Mark 3:19, Jesus “went home,” but what came together to greet him in verse 20 was “a crowd.” And, let’s face it, if you can keep your head down and blend into the crowd, you can feel as if you belong, or feel as if you don’t belong—depending upon how authentic you’re willing to be.

Moreover, the religious authorities, known as the scribes came down from their headquarters in Jerusalem and issued the following statement through their press secretary: “Jesus of Nazareth has Beelzebul, and by the ruler of demons he casts out demons.”

Wow! The most authentic human being to have ever lived and died is being accused of being the most deceptive and the most evil person to have ever lived. And, you see, that puts you and I in the midst of a pernicious pickle, a daunting dilemma and perhaps the most confusing conundrum of all.

A few weeks ago, I went to see the film, written and directed by Quentin Tarentino, entitled, “Once Upon A Time in Hollywood.”  And don’t worry:  I’m not going to spoil it for you. Except: I will say that the storyline involves actors and actresses, living and dying in that desert metropolis in 1969, and that you may recognize certain characters, like Bruce Lee and Sharon Tate.  But what strikes me, as I reflect upon this Hollywood story on the old celebrities of Hollywood, is this twofold insight:

#1—How many people are playing parts, and how many people who watch them playing their parts would like to imitate their fictionalized lives; and

#2—Who will have the final, and absolute last word, on your story or my story?

I would argue that authenticity is the opposite of deception, but just as that argument might escape my lips, I might hesitate and wonder to myself whether I’m about to feign that authentic persona once again.  And then, I might repent (as it is Lent) at saying anything at all.

Previous Is your religion a tie that binds or blinds?
Next Hindu Community To Celebrate Holi at FāVS Center March 8