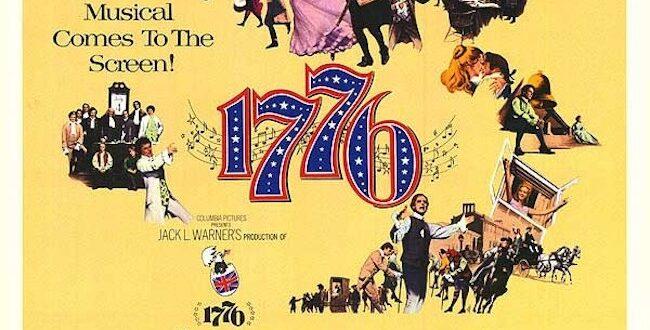 It is my July 4th tradition.

For those who have not seen the film, it is a musical oddity. Based on the 1969 Broadway stage musical, the story deals with the debate over American independence conducted in the Second Continental Congress. The lead characters are John Adams, Benjamin Franklin, Thomas Jefferson, and other colonial leaders of the day who haggled, argued, literally fought, and ultimately compromised before approving the Declaration of Independence.

In so many ways, “1776” defies Hollywood musical tropes. There is romance, but the love stories are secondary to the main narrative. There is dancing, but the dancers are older men whose style is more charming than skilled. The cast, largely made up of veterans of the New York stage production, can sing, but with one or two exceptions, not very well. (The soundtrack can be heard on YouTube.)

The songs are tuneful but not particularly memorable. No Irving Berlin here. Still, they help tell the story, with lyrics based on letters, statements, and speeches of the founding fathers.

I first saw “1776” as a stage musical produced by a local theater company in the early 1970s. I found it profoundly moving. But I never saw the movie version until decades later when I bought a VHS copy. The taped version had been badly edited with several significant scenes deleted. And the reproductive quality was terrible.

Still, I was moved.

I have tried to share my tradition with family. My children had no patience for the film, found it overlong and boring. So did the critics in 1972.

My dear wife will watch for a minute here and there, but won’t sit through the entire movie.

But I watch each year – now a fully restored version with pristine digital reproduction – to the point where I know the dialogue by heart.

Why does the movie appeal so?

Movie musicals are fantasies, in general. But there is real history in “1776,” compressed, synthesized, and often subordinated to narrative drama, of course. But that history, such as it is, is more relevant now than when the film debuted.

The colonies were truly split on the issue of independence as congressional delegates began their debate in the spring and summer of 1776. Conservatives, largely from the South but not exclusively, still hoped for reconciliation with England even though George Washington was already in command of a Continental Army engaged with British troops. New Englanders, aligned with Virginia, were committed to independence. The debate leading up to approval of the declaration was often acrimonious, according to later accounts, a quality well captured in the film.

To win approval of the declaration, all parties had to compromise. And no compromise was as significant as the ultimate removal of language condemning slavery. Without that compromise, southern delegates likely would have killed the dream of independence though history tells us many northern delegates also opposed the language.

Although this is a Broadway/Hollywood version of history, it is accurate in the broad strokes. As the country struggles with racial divisions that are the legacy of 1776, the musical reveals some important truths.

There are two production numbers that particularly resonate.

Deleted from the first release at the request of President Richard Nixon, but now restored, is “Cool, Cool, Considerate Men,” in which anti-independence delegates sing of the importance of property and wealth and of their compulsion to always hang to the right, never the left. The song is profoundly unsettling.

We’ll dance together to the same minuet

Nixon reportedly saw the song as an insult to his politically conservative base.

More disturbing is “Molasses to Rum,” in which John Rutledge of South Carolina, played by the amazing John Cullum, sings about, and defends the slave trade while condemning New England seafarers who transported slaves from Africa to the southern colonies. The number is hard to watch, particularly as Cullum enacts a slave auction.

I tend to be an emotional movie fan. I am easily manipulated by a good, tear-jerking movie story. I will cry at the end of “E.T.,” during the “La Marseillaise” scene in “Casablanca,” or even the end of a schlock picture like “Armageddon” when Bruce Willis says goodbye to Liv Tyler.

So, during that final scene of “1776,” when the delegates stand to sign the declaration while the Liberty Bell tolls in the background, I tear up, every viewing, year after year.

But I must be honest. The moment that is most emotional for me comes near the end when Adams receives a gift from his beloved wife, Abigail, played by Broadway star Virginia Vestoff. Their love theme, “Yours, Yours, Yours,” is based on the actual letters they exchanged while Adams, played by William Daniels, served in Philadelphia. Throughout the film, Adams is asking his wife, who is struggling with numberless domestic crises, to send him salt peter to be used for making gunpowder.

At Adams’ lowest point, with the vote for the Declaration of Independence hanging in the balance, Abigail sends him barrels of salt peter as their love theme is reprised. That incident may not be historically accurate. But to me it has always been a moving tribute to true, unconditional love, a love that transcends time and place.

The other day, watching “1776” for the 28th straight year, I looked at my dear Carla (who was not paying the least attention to the movie), and thought to myself, “yes, she would send me salt peter if I asked.” That is unconditional love.

Adams had Abigail. I have Carla. And it gets me every time.

Previous Where We Gather: Spokane Buddhist Temple
Next A drought of our spirits