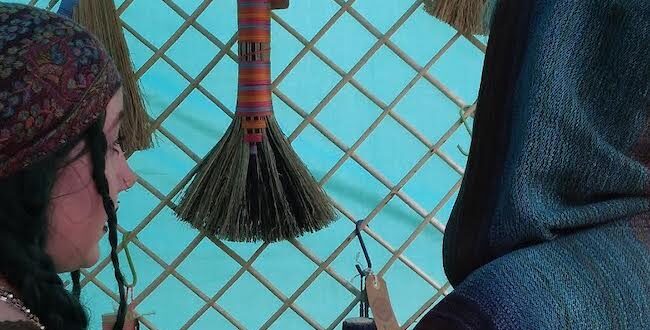 “None of us expected what happened,” said Rachel Heatly, co-founder of Northwest Pagan Fest.

Back in 2018, Heatly and two friends, Kohanna Richardson and Selene Blackstar, dreamed of a Pagan Pride event in Spokane. They also knew they had the skills to make it happen. They just weren’t sure how many people might show up; but, they were determined to try.

Heatly has years of entrepreneurial experience, is secretary of the Spokane Food Truck Association and runs a kettle corn operation. She attends many events as a vendor and learned through experience what it takes to pull off a major event. Richardson and Blackstar are also entrepreneurs and have attended Pagan Pride events in other parts of the Pacific Northwest.

The three GenXers met seven years ago at a meetup hosted by the now-defunct Inland Empire Pagan Guild at the Unitarian Universalist Church. Despite declining attendance and eventual group dispersal, Heatly made enduring friendships that ultimately led to the creation of Northwest Pagan Fest, a non-profit that is in the process of finalizing its 501c3 status.

Organizers relied on their own funds and some generous donations to pull the whole thing off. Their connection with the Unitarian Universalist Church prompted the decision to hold the fest at their location.

“It was perfect,” Heatly explained. They wanted a space with lots of parking, restrooms and indoor and outdoor space to accommodate the dance companies, workshop leaders, vendors and attendees that needed space and flexibility. Planned activities included a children’s craft and activity area, a drop-in and drum event, a divination room with palmistry, tarot and astrology and finally, a kitchen area to prepare lunch. The UU facilities coordinator was extremely supportive and helped throughout the event.

At 8 a.m on Sept. 17, vendors from North Idaho, Spokane and surrounding areas arrived. Pagan-themed businesses like Three Sisters’ Broome Shop from Coeur D’Alene, DandyLion Crystals and Jewelry from Spokane, as well as sponsors like Shadow Fox Witchery,  Spokane Magickal Moot and over a dozen more were represented. Heatly and associates wanted to keep everything local and relied on community connections and word-of-mouth to attract participants.

By 10 a.m, as the Opening Ritual began, volunteers lost count of how many cars filled the parking lot. Hours of revelry followed. Live music, live dancers, belly dancing, crafts and workshops on archetypes, ancient knowledge and crystals were held indoors. Even children were occupied with crafts.

No one expected 800-plus people to turn out for the inaugural Northwest Pagan Fest. Not even the attendees.

Dressed in long skirts and sporting tattoos and corsets, Kamani Waters and her daughter Tuesday beamed. After moving to Spokane four years ago, the two felt isolated. On the west side of the state, pagan community was easier to find. When they found out about Pagan Fest they had to show up, and they found the turnout and activities rejuvenating.

But, why would pagans need community? Non-pagans have temples, churches, chapels, cathedrals, all kinds of places that center a religious community. Pagans, on the other hand, have “personal altars.” Walters explains that while she feels connected to Odin and other Northern European gods, her daughter has her own beliefs. Despite the freedom pagans have to personalize their beliefs, Waters explains that  they still like to experience connection and community.

“We’re not Satan worshippers,” Waters says. She goes on to explain that pagans are inclusive, accepting and respectful of others’ beliefs.

“There’s no wrong way to be pagan,” she continues. It comes down to appreciating the earth and respecting all living things and parts of nature. Tuesday nods in agreement.

“Pagan is a Christian word,” she says. “Paganism [as a Christian term] is an umbrella term used for any non-Abrahamic religions like Shinto Buddhism, Hindu and Native American religions.”

Heatly is not Christian, so she identifies as pagan. She isn’t drawn to ancient gods or pre-Christian, Northern European beliefs. Rather, she considers herself spiritual. That spirituality manifests itself in “happiness, joy and connection,” she says.

A few days after the event, Heatly apologizes for feeling scattered. She and her partners Richardson and Blackstar are breathing again after a successful and exhausting day. The event’s goal was to build community connection, not just for pagans. In that regard, the organizers considered the event a success.

Heatly believes that, regardless of beliefs, the common goal of all religions is to “come together with respect, happiness and joy.”

As for next year?

“That’s what we’re planning,” laughs Heatly. They are exploring larger venues for 2023 and are planning additional fundraising activities throughout the year. For now, the trio is reflecting on the event. It was five years in-the-making but as Heatly says, “It happened when it was supposed to happen.”