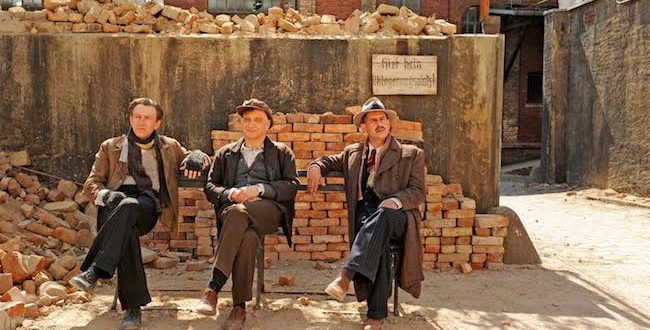 A festival of much-needed uplift

It has been, without question, a tough year to be Jewish in America. Last year saw a sharp, scary uptick in the rate of anti-Semitic incidents, but this year was even worse, as hate turned to brutal violence in the Pittsburgh synagogue massacre. The Spokane community came together in a big, moving show of solidarity with the local Jewish community, which was great to see. But incidents of hate continue unabated. What we’re dealing with now is an increasingly pervasive climate of anti-Semitism, not just isolated incidents.

In addition to calling for real, needed action against neo-Nazism and its apologists, Jews I know are also making it clear that they’re not going anywhere; that they can’t be cowed by hate; and that Jewish tradition itself provides essential tools to deal with bigotry. It’s highly appropriate, then, that the upcoming Spokane Jewish Cultural Film Festival (full disclosure: I organize it) highlights themes of Jewish resilience and perseverance in the face of daunting challenges.

During the past few years, we’ve screened some pretty heavy films. There’s nothing inherently wrong with difficult subjects and a sad tone; at the same time, good films come in all flavors. The fallacy that to be good it has to be a downer is far too easy to buy into for recovering cinematic snobs like me. Hey, don’t get me wrong: Israeli writer-director Samuel Maoz’s widely acclaimed (and controversial) “Foxtrot” is terrific, and well worth seeing. Members of our film selection committee definitely praised it. But it’s also OK to present some feel-good stories at a time when the state of the nation, and the world, is making us feel pretty bad.

The opening night film, “Heading Home: The Tale of Team Israel,” is many things. Julie Morris, who will introduce “Heading Home” at the festival, calls it an Israel travelogue. It’s that, for sure, as a bunch of Jewish-American ballplayers get to know the Holy Land in anticipation of playing for Team Israel in the World Baseball Classic. (Didn’t know that was a thing? Well, it’s a thing, and even Australia has a team!)

But “Heading Home” is also a look at Jewish identity-building as it occurs for so many American Jews: through the unique lens of time spent in Israel, which a great many Jews worldwide see as their ancestral homeland, regardless of where they live or hail from. On a more basic level, it’s a classic underdog story, a “Bad News Bears”-style message movie about what athletic competition is really about. The film is a rousing testament to the power of sports, believing in something, and busting stereotypes wide open.

“Bye Bye Germany” uses wry and sometimes dark humor to enliven a story that doesn’t sound especially uplifting: Jews in a displaced-persons camp in post-World War II Germany try to rebuild their lives via door-to-door sales. Director and co-writer Sam Garbarski manages to turn a tale of sly mischief into a testament to resilience and even redemption in the aftermath of tragedy. As the review aggregator Rotten Tomatoes declares, the film “offers thoroughly entertaining proof that there are still new stories to be found in the oft-examined rubble of World War II.”

That’s notable on two counts: We tend not to expect WWII-set movies to be “thoroughly entertaining,” or really much fun at all. Second, WWII- and Holocaust-themed films are bumping into the problem Civil War cinema began to contend with a while back: repetition of themes and even storylines. When a movie finds a new angle, or tells a previously unheard story, it garners deserved attention.

The accomplishment of “Bye Bye Germany” lies in its interweaving of heartbreak, survival, and humor — a mixture found in much Jewish art. (Anyone who saw “The Last Laugh” at our 2018 festival knows exactly what I’m talking about.) Garbarski’s film doesn’t downplay the devastating effects of trauma; in fact, it spends considerable time examining the impact great loss can have on different kinds of people.

Yet the words of the movie’s protagonist, a good-natured rascal named David Bermann, echo through the entire film: “Hitler is dead, but we are alive!” “Bye Bye Germany” is about not letting the bastards grind you down, and Bermann’s journey not only takes him from ruins to revival, it gives hope to all who must pick themselves up after some huge, malevolent force wreaks havoc on their lives and their country.

Finally, there’s “Shoelaces.” The story — which centers on an aging father and his special-needs adult son — could have played like a saccharine movie-of-the-week. But director Jacob Goldwasser, who felt compelled to make the film because he has a special-needs son and “never felt that the depiction of special needs characters on film rang true,” keeps it real in several ways. The relationship that emerges, slowly, between father and son does so naturally, without forced scenes that check off formulaic boxes, and without deus ex machina-style events that stretch believability. It’s through the normal ebbs and flows of life that grumpy mechanic Reuven and his son, Gadi, form a real and meaningful bond.

Veteran actor Dov Glickman, who plays Reuven, won a well-deserved Ophir (Israeli Academy Award) for his performance. But Nevo Kimchi, who nabbed an Ophir nomination for his remarkable turn as Gadi, merits just as much praise. Supporting characters in the film are well-drawn, but the movie is mostly a duet that rings true every step of the way. That’s true even at the end, when many films like this choose simple, crowd-pleasing resolutions that sacrifice realism. Relating to each other authentically isn’t easy for Reuven and Gadi at first, but personal growth and persistence go a long way.

“Shoelaces” is much smaller in scope than “Heading Home,” with its globe-spanning sports competition, or “Bye Bye Germany,” where survival — both physical and psychological — is what’s at stake. Yet “Shoelaces” conveys memorably the importance of not giving up when the odds seem unfavorable. In dark times that threaten to get darker still, no sentiment could be more relevant, or more needed.